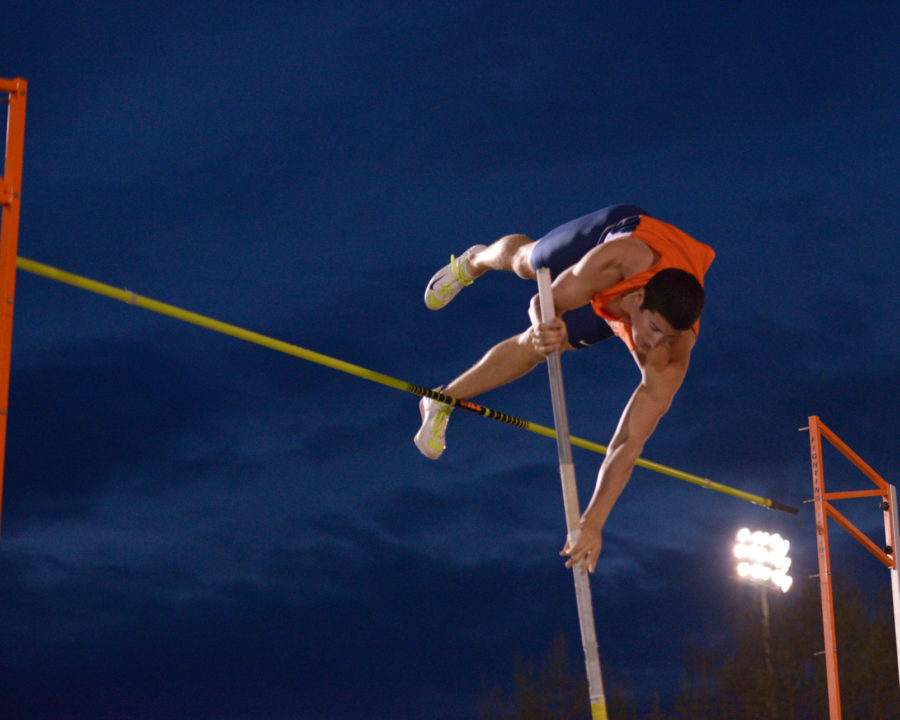 Illinois' George Wanda attempts to pass the bar during the pole vault event at the Illinois Twilight Meet on the Illinois Soccer and Track Stadium on Saturday, April 18.

The Illinois men’s track and field team hosted the Illinois Twilight meet on Saturday, competing against nine other teams.

In the 10-team field, Eastern Illinois, who placed second with 125.5 points, was believed to be Illinois’ biggest competitor, but the Illini won the meet with 247 points.

“(Eastern) has a deep team, so they were certainly the best squad here for us to compete against,” said head coach Mike Turk. “This time of year I just worry about the weather and I felt like if the weather was decent, we’d perform pretty well. The weather was great, so we had a good day.”

Junior Cam Viney competed in two events, the 110-meter hurdles and the 400-meter dash, running a personal record in both. While Viney often competes in the 110, Saturday was the first time he ran the 400, which proved challenging — Viney said he had no prior knowledge about his competitors.

With the Drake Relays starting on Wednesday, Viney is working to improve on his 400-meter hurdles time — his goal for the season is to be an All-American in the event.

“I know Dave (Kendziera) and I are going to be working hard this next week for the 400-meter hurdles at Drake,” Viney said, “And we both run the 4×400 meter relay as well, so I know we’re both going to be working really hard and we’re just going to push each other.”