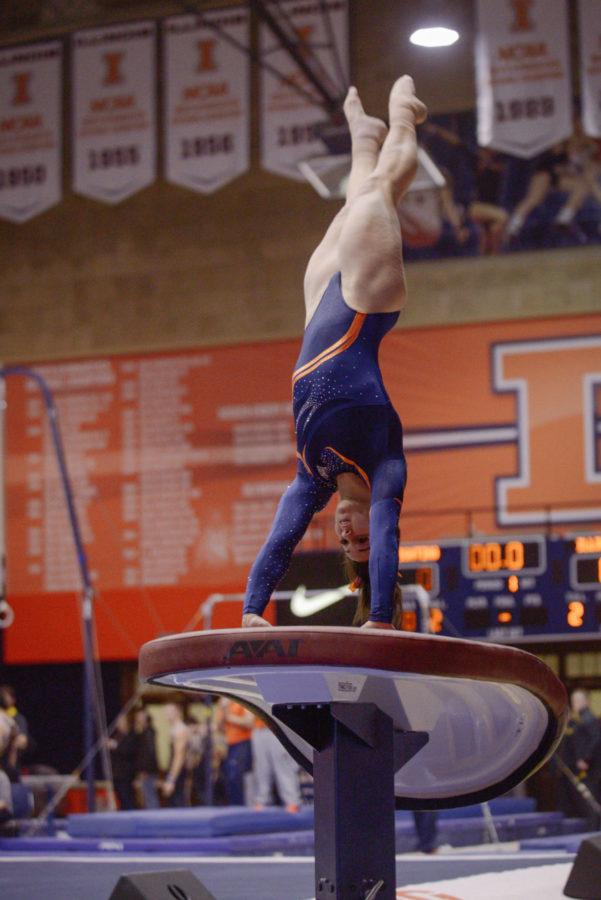 Three Illinois women’s gymnasts competed at the NCAA Championships on Friday at the Fort Worth Convention Center in Fort Worth, Texas. Sophomore Mary Jane Horth, junior Giana O’Connor and senior Sunny Kato all failed to place in the top three in their respective events, but head coach Kim Landrus was still proud of her gymnasts.

“They went in there, and they were extremely consistent,” Landrus said. “I’m so pleased with the way they went out there and represented Illinois.”

O’Connor came away from the meet as the most successful of the Illini trio, taking home first-team All-American honors in the all-around. The junior earned a 9.850 on balance beam, uneven bars and vault and a 9.875 on floor for a 39.425 all-around score. The score was good enough to tie for third in the afternoon semifinals session and sixth overall.

Kato expressed her appreciation for O’Connor’s accomplishment after the meet.

“I was so moved by her performance today,” Kato said. “She held her head high, and she was so confident, and it was amazing watching her. I was getting goose bumps, because she was doing so well. She looked so happy out there, so I could not be more proud of her, and she completely deserves being an All-American.”

Horth also competed as an all-arounder, but didn’t score well enough to be named an All-American. She finished the meet with an all-around score of 39.200: 9.750 on floor, 9.800 on beam and vault and 9.850 on bars. She recognized that it wasn’t her best performance but was still pleased with it.

“There were some shaky moments, and I could’ve definitely had some better landings on things,” Horth said. “But I went out, and I put everything I had out there. I’m so proud of myself and so happy with how I did even though the scores may not reflect my best performance.”

Kato was an event qualifier for bars, so she only competed on that event. She scored a 9.825 for her routine, but it wasn’t enough to achieve her goal of being named an All-American. It also wasn’t enough for her to advance to the event finals of NCAA Championships.

“Obviously I’m frustrated with myself that I wasn’t able to be a clutch hitter and hit my routine to advance, but that’s the sport of gymnastics,” Kato said. “That just gives me more drive to work even harder for next season.”

Kato was the Morgantown Regional co-champion on bars — her performance there qualified her for Nationals.

As for the gymnasts who didn’t make the trip to Nationals, Horth, Kato and O’Connor all know they also have motivation for the next season.

“These girls who didn’t make it this year, I know that they’re hungry for it,” O’Connor said. “They want to make it, and they’re ready to get in the gym and work for it, because no one wants to feel like they did at Regionals when we found out that we didn’t make it. So everyone is just ready to go out there and attack.”