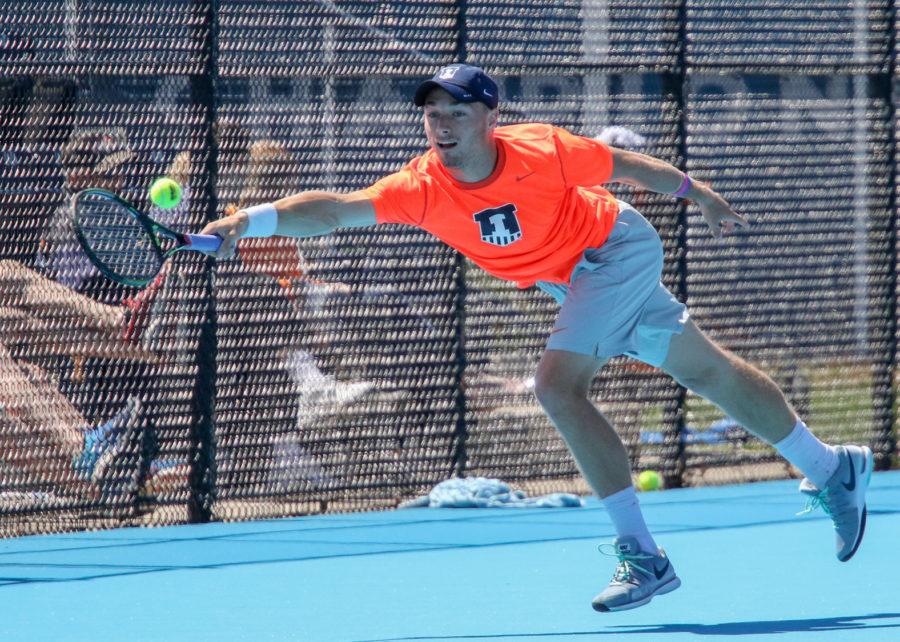 The bracket for this week’s Big Ten tournament at the Atkins Tennis Center was released Sunday. The Illinois men’s tennis team is the No. 1 seed after taking a share of the regular season conference title.

It’s the Illini’s first time hosting the tournament since 2005 — the year before Brad Dancer took over as head coach.  That year the team defeated Ohio State in the finals 4-2. Illinois has won the tournament once since then, in 2007, and has been eliminated by the Buckeyes every other year. The Illini will most likely need to face Minnesota or Ohio State if they want to take the title. They wouldn’t see either team until the championship match.

Even after taking home a share of the Big Ten regular season title Sunday, Dancer and the team said the loss to Minnesota on Friday was still hanging over them. The Illini lost the doubles point for the first time since mid-March, and the early deficit was a sign of things to come. Dancer was frustrated with the team’s doubles play against the Gophers.

“Our doubles has not been good for a number of years now,” Dancer said. “And if we don’t turn that around, we’re not going to achieve the goals we want to achieve.”

Senior No. 56 Tim Kopinski said the loss was still “lingering” with the team but that it could be used as motivation for this weekend’s Big Ten Tournament.

“We’re not satisfied. It’s a long season so to finish it off this way is a little disappointing,” Kopinski said. “We’ll come back in the Big Ten tournament and prove we’re dominant there.”

Illinois finished 10-1 in the Big Ten. It’s the team’s best conference record since 2010, when it finished 9-1 … The Illini have improved in conference play the last three years, going from 8-3 in 2013 to 9-2 in 2014 to 10-1 in 2015 … Illinois’ last perfect Big Ten regular season came in 2005. That’s also the last year it beat Ohio State in the regular season … Minnesota claimed a share of its first Big Ten title in 20 years with its victory over Illinois. Ohio State was the regular season conference champ last year … The last time Illinois beat Ohio State in the regular season and didn’t go undefeated in the Big Ten: 1997 … The last time a team other than the Buckeyes eliminated the Illini from the Big Ten Tournament: 1996. Michigan took the championship over Illinois … Freshman Aleks Vukic made his Twitter debut after the Minnesota match, tweeting that the team will come back stronger and has the NCAA’s Championships in its sights.