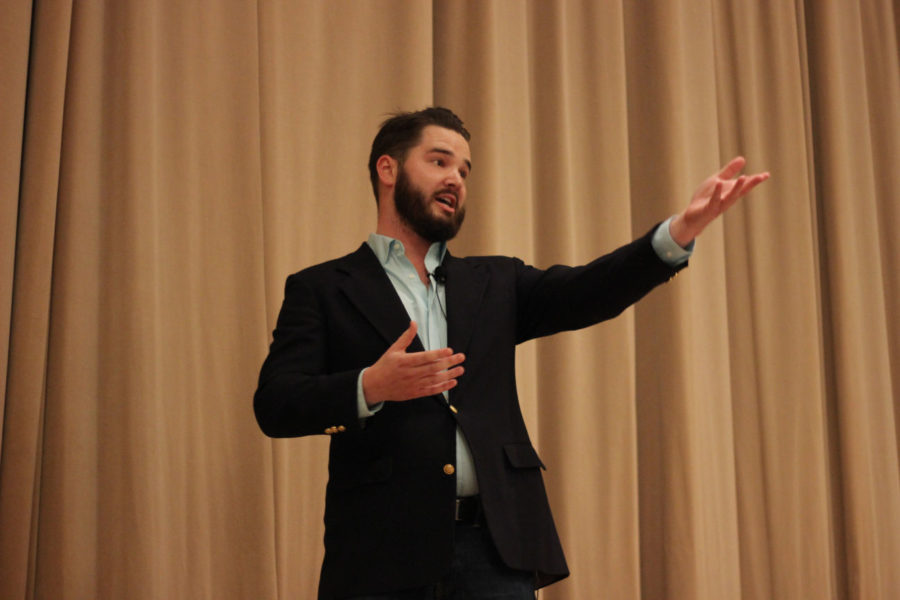 Jesse Tuttle remembers his initial draw to comedy as something only a fisherman would understand: giving the audience a joke, waiting for them to take the bait and getting the response every comedian waits for.

“When you get that first laugh on stage, you become hooked,” said Tuttle, who is the co-founder of C-U Comedy.

Jesse and his identical twin brother Justin Tuttle started C-U Comedy in 2009, and since then, they have performed shows throughout the area, including venues such as Soma Ultralounge in Champaign. The brothers shared their love for comedy with University students on Monday night, when Justin hosted and Jesse judged the annual Stand Up Comedy Competition in Gregory Hall.

At the show, students, friends and family were scattered throughout the 18 rows of Gregory Hall’s auditorium to watch the 17 student-competitors. The event was an opportunity for all students to participate in stand-up comedy and highlight the importance of a good laugh.

Matt Shancer, graduate student in Media and a contestant at the competition, said he has been interested in comedy for quite a while, working and perfecting his craft along the way.

“I’ve been performing in the C-U area for about two years, and it’s really helped me get better,” Shancer said. “You get to go out and tell some jokes, and it’s a lot of fun.”

At the show, Shancer did a routine about the Undergraduate Library doors.

He joked, “What’s the deal with the UGL doors? Am I right people? Do they not want us to study? Why can’t you open those?”

The crowd laughed immediately when he mentioned the library’s heavy doors, something that students deal with on a regular basis on campus.

Juan Villeta Garcia, graduate student in mathematics, was another contestant at the show.

“The comedy scene is vibrant and very welcoming,” Garcia said.

Garcia said he was so excited to be able to enter the competition and see the new faces of comedy by his side.

“My friend told me about the show and I thought it would be fun to come out and laugh,” she said.

Both Jesse and Justin said they hope C-U Comedy showed students there are opportunities to become a part of the comedic scene, even though they’re not in a large metropolitan city.

“I didn’t know anything about stand up, I had always watched it and was a fan of George Carlin, and that’s it,” Justin said. “There was no defining moment that I knew comedy was for sure what I wanted to do.”

Justin said C-U Comedy and other students who have been able to discover the comedy scene in the area encourage anyone who is at all interested in learning and practicing comedy to participate and get to know what’s happening in the city.

In the meantime, Justin and Jesse will return to planning more C-U Comedy events and making jokes in their everyday lives.

“Sometimes I’m just waiting for something bad to happen, so I can make a joke out of it,” Justin said, laughing.