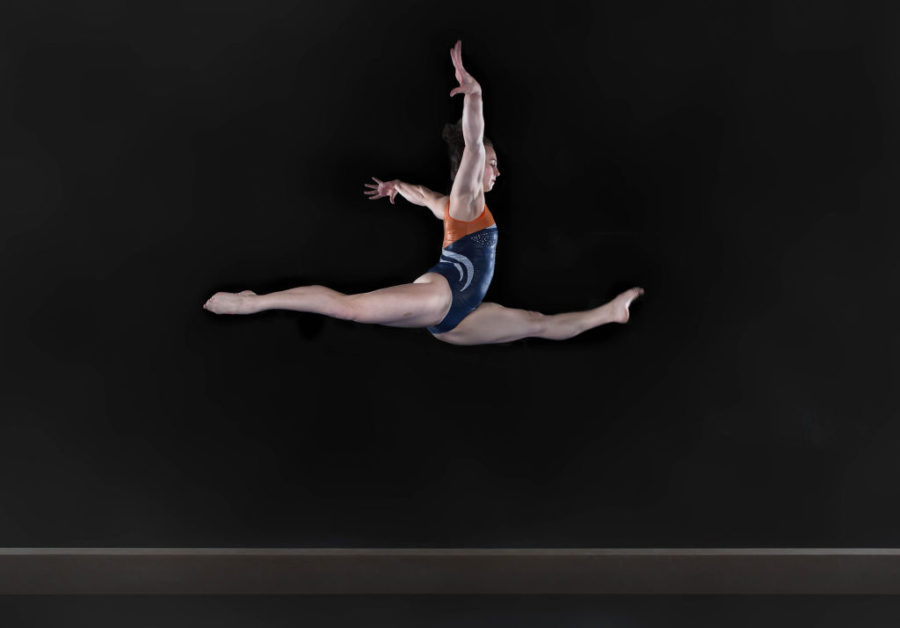 Gianna O’Connor has finished out her junior season with an All-American performance at the NCAA Championships.

One event stood in the way of Giana O’Connor and the end of her junior season on the Illinois women’s gymnastics team: the uneven bars.

As an individual all-around competitor at NCAA Championships, O’Connor competed at the end of every rotation, following a team’s lineup. She was rotating with Utah, so she needed to wait for Georgia Dabritz to complete her bars routine before getting up on the apparatus for one final time this season.

“Usually, I never watch the person that goes before me,” O’Connor said. “I get really nervous.”

This time, however, O’Connor watched the routine because she was competing by herself. It didn’t matter as much if she got nervous and messed up because it would only harm herself and not her team.

She watched Dabritz weave her way in between the bars, from the high to low and vice versa. When Dabritz went for the dismount 30 seconds later, O’Connor amusingly thought, “Oh gosh.”

O’Connor would end the NCAA Championships in Fort Worth, Texas, by following the first perfect 10 of the weekend. But that didn’t deter her. Rather, it brought a smile to her face and laughter came out. She even threw up the Utah “U” hand sign toward the crowd at the Fort Worth Convention Center before getting up on bars.

“That was probably the calmest I’ve ever done a bar routine,” O’Connor said. “I just knew I wasn’t going to reach that level, so just go out there and do my routine.”

It wasn’t just on bars that O’Connor felt calm, though. Her performance at Nationals on Friday was the calmest she had felt in a collegiate competition because her scores wouldn’t count toward a team total like she was used to. She didn’t feel the pressure of potentially hurting her team that afternoon.

O’Connor scored a 9.850 on bars, which brought her all-around total to 39.425. The score tied for third in Semifinal I of Nationals, giving her a first-team All-American honor in the all-around.

Sophomore Mary Jane Horth accompanied O’Connor at Nationals as an all-around competitor, and said she was proud to see her teammate achieve such a feat.

“She definitely deserves it,” Horth said. “She’s so humble, so I love seeing her succeed and just bask in that for a little bit. It’s really exciting, and I couldn’t be happier for her.”

In achieving the score, O’Connor’s name came up on the scoreboard with Olympic silver medalist and current Florida gymnast, Bridget Sloan — the two had the exact same all-around score. That gives her more confidence moving forward — something she has struggled with.

“I don’t believe in myself,” O’Connor said. “I don’t believe that I’m as good as people like that, and tying sixth with an Olympian just made me realize that I am good enough. I am at that level.”

As O’Connor shared the sixth-place spot on the podium with Michigan’s Nicole Artz, Nebraska’s Jessie DeZiel and Sloan, a smile came across her face, and it didn’t leave. She could see her family and fellow Illini Nationals qualifiers Horth and senior Sunny Kato in the crowd. Then streamers of various colors fell upon O’Connor and the other all-around finishers as they waved to the crowd. Her smile became even bigger.

“I’ve always watched it from the stands,” O’Connor said of the awards ceremony. “I’ve never been down there when it’s happened. It was just an amazing feeling.”

O’Connor’s 39.425 and All-American honor has put her name in the record books: the best all-around score by an Illinois gymnast at NCAA Championships, the eighth NCAA All-American in program history and the second Illini to be named first-team All-American in the all-around. But she knows all of these accomplishments couldn’t have happened if she wasn’t accompanied by Horth and Kato at Nationals.

“I’m beyond grateful for that,” O’Connor said. “I don’t think I would’ve been nearly as successful as I was this weekend had I not had them there cheering for me, supporting me. I did have Utah there obviously, but Sunny and MJ, I could hear them cheering from across the arena, and it just felt great knowing that they were there for me.”