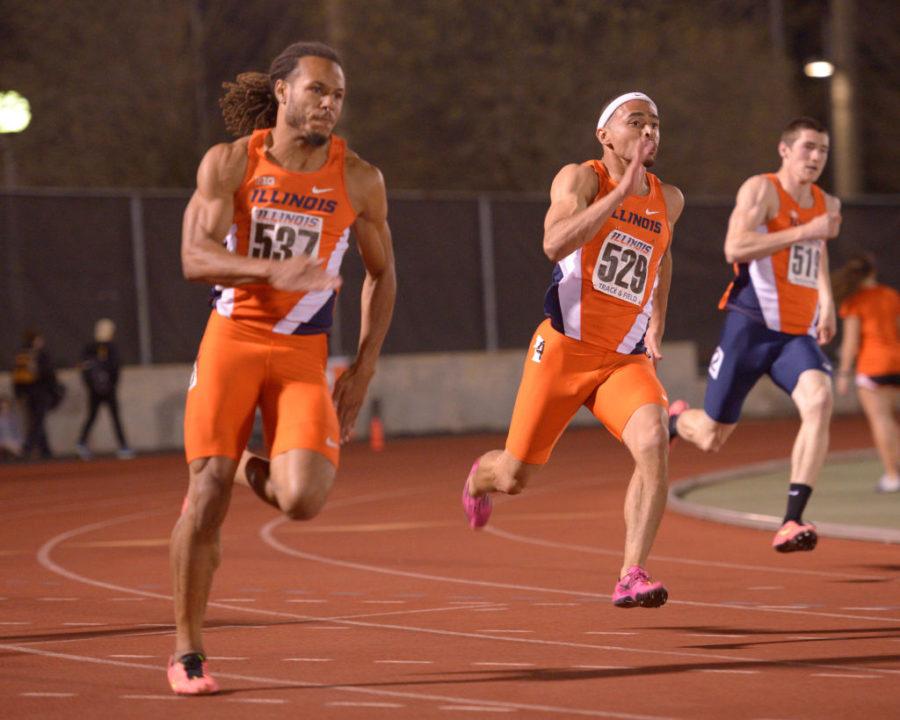 Illinois’ DJ Zahn, Brandon Stryganek and David Kendziera sprint past the competition during the Men’s 200 Meter Dash at the Illinois Twilight meet on Saturday.

The Illinois men’s track and field team will travel to Des Moines, Iowa, for the 106th Drake Relays April 22-25, with different events held each day.

The Illini won the Hy-Vee Cup in 2013 and tied with Arkansas in 2014. The Razorbacks look to be a top competitor for the Cup once again.

With Illinois having won the Cup the past two years, one might think there is pressure to compete at a championship-winning level again. But that doesn’t seem to be a concern for senior DJ Zahn, who said that the team knows what level they should be competing at.

“We’re going to crank it up, and we’re going to throw everything we can at Drake,” said head coach Mike Turk. “We’re maybe a little thinner in the middle distances this year than we were last year and the year before, but I feel really good about our sprint crew right now. Obviously they’re running really well.”

One concern that the Illini have with a meet during spring in the Midwest is the fluctuating weather.

The unpredictable weather can inevitably cause problems for an outdoor meet, either in the way the athletes perform or if the meet gets postponed or cancelled.

Zahn believes that living in the Midwest and being able to train in such diverse conditions works as an advantage over teams from the South that might not be as used to such conditions.

Intensity of the workouts prior to the meet is another concern that presents itself to the team.

“Today was the hardest we’ll probably practice,” Zahn said. “Then we’ll work on more skill stuff, like strength and handoffs for the relays because we don’t want much volume before the big weekend. Wednesday and Thursday we’ll practice when we can make it to the track, but we won’t be doing anything crazy, it’ll just be to keep us moving.”

For the athletes that won’t be competing the first two days, there’s a lot of time in between the light practices, but that doesn’t mean they don’t attempt t remain focused.