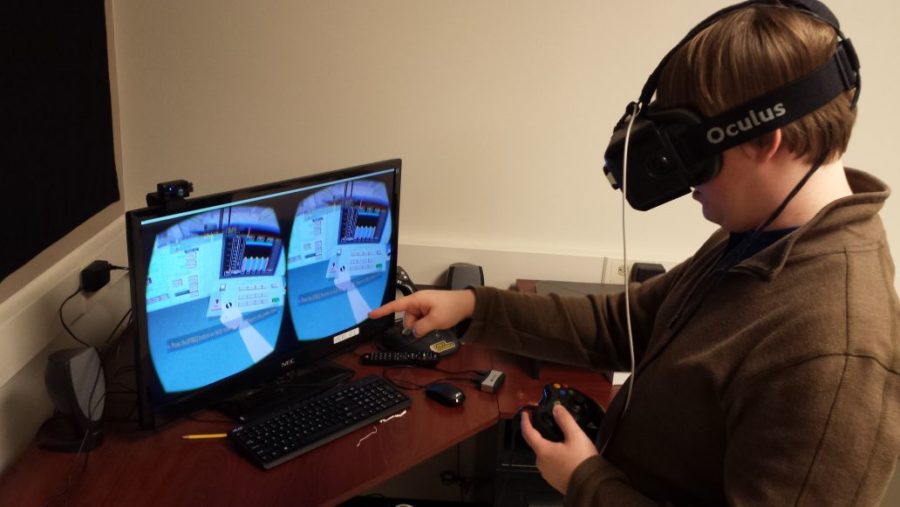 Paul McCartney stands on stage. His band is in the background warming up for another song. There is the sound of a drum and cymbals starting up a rhythm. Bright lights shine from overhead and from below the stage to reveal the waving arms and excited movements of the eager, cheering crowd. It’s after turning around in a full circle that attendees become immersed in the experience.

Until the visors come off, users don’t realize they are standing in the virtual reality lab at the University’s Talbot Laboratory. The concert experience has been replaced by a classroom with desks, chairs, computers and various virtual reality equipment. This is where a research group lead by nuclear, plasma and radiological engineering, NPRE, professor Rizwan Uddin experiments with virtual reality devices and programs.

Experiences like the Paul McCartney concert are created through a free app that Cory Scribner, a member of the virtual reality research team and senior in NPRE, downloaded on his Android phone. He can then place his phone into $15 cardboard pieces that resemble binoculars, called Google Cardboard Visors. By looking into them, the images on the phone become three-dimensional, and the viewer feels immersed.

The Google Cardboard Visor isn’t the only virtual reality equipment the group uses. There is also the Oculus Rift, a headset that simulates visual contexts present in the real world. It differs from Google Cardboard in that participants can actually interact with objects within the setting. Each Oculus Rift headset is priced at around $350.

“It’s not perfect, but it’s closer than anybody has ever been in history,” Scribner said. “There has been tons and tons of research going into virtual reality, and so far the Oculus Rift headset is currently the best.”

Oculus Rift is a private company that was recently bought by Facebook. The research group at the University, which consists of Scriber and Justin Joseph, sophomore in NPRE, uses the device for their virtual simulations and experiments.

Uddin said the research group’s focus is to develop and improve upon virtual reality programs that can be used for academic and job training purposes.

Currently, there are virtually reconstructed models of a few of the University’s labs on the Oculus, one of which is a chemistry lab in Noyes Laboratory. In this model, participants go through safety training by locating fire alarms, fire extinguishers and emergency exit doors. This basic safety training must be completed before students go on to do experiments.

In regard to workplace training, Uddin said if a company needs to train its personnel but the environment is hazardous because of things such as radiation or the presence of toxic materials, it may be difficult to conduct this training in the actual environment. Instead, a model of that environment can be made, and personnel can be trained through virtual reality.

“There is interest on the part of places which find it very expensive to develop actual physical labs,” Uddin said. “So they would like to have these virtual labs where their students can go conduct experiments and collect data in a video-game-like environment.”

Uddin’s team has also used virtual reality to solve the issue of insufficient space in laboratories.

“About 10 years ago, there were about 15 undergraduate students in any class in the department,” Uddin said. “So the lab stations that we had were sufficient. But then our numbers went up to 50, so then the lab stations were not sufficient. So we said, ‘OK, half of you will do the lab here in the physical lab, and then the other half will do the virtual lab.’ They can do that from home or from the computer lab.”

Because the Oculus Rift is still under development, there are a few shortcomings the researchers are working to resolve.

One of those issues is figuring out how participants can interact with items around them when they are wearing virtual reality devices.

“It is one thing to be able to just walk around (in virtual reality),” Uddin said. “But if you want to do an experiment – you want to pick up something and put it somewhere else, you want to pour some water – how do you do those things when you are wearing these goggles?”

Joseph said some people are also prone to becoming nauseated while using the Oculus because of incongruences with movement between virtual reality and real life.

“Another thing is that the Oculus has too many wires,” Joseph said. “While the Oculus is running, there is a ton of data that is being transmitted between the Oculus and the computer. As a result, a lot of wires are needed. It would be much better if the Oculus were wireless. As of now, the wires prevent people from moving, so they have to use an XBOX controller to move around.”

There are also problems with leap motion, a sensor that detects one’s hands, fingers and arms in a simulation, which are then used to gesture signs to the computer. These researchers use leap motion to enable subjects to interact with the simulated environment using their hands.

“Leap motion has limitations on how it can detect your hands,” Scribner said. “Currently, interacting with buttons in the simulation is very difficult because getting the hands to be in the right position and getting them to consistently push a button is troublesome.”

Outside of an educational or work setting, Oculus Rift could also transform gaming experiences through its immersive nature.

As devices like the Oculus continue to undergo development to become civilian-standard models, everyday consumers can meanwhile access some virtual reality programs for free on their phones.

The Paul McCartney concert app on Scribner’s phone is no longer available for new downloads, but there are several other virtual reality smartphone apps that can be downloaded from Google Play or iTunes, such as a roller coaster app called “Crazy Swing VR” for Android phones and “Roller Coaster VR” for the iPhone 6, as any iPhone older than that is too small for the virtual reality to effectively work in the Google Cardboard Visors. When placed in the Cardboard Visors, this app simulates the feeling of actually being on a roller coaster – dips, swerves and all.

The simulation can seem so close to reality that Scribner said he sometimes feels the real-life effects that come along with riding a roller coaster.

“I would advise if you wanted to see that one,” Scribner said, “I tend to fare better with an empty stomach.”