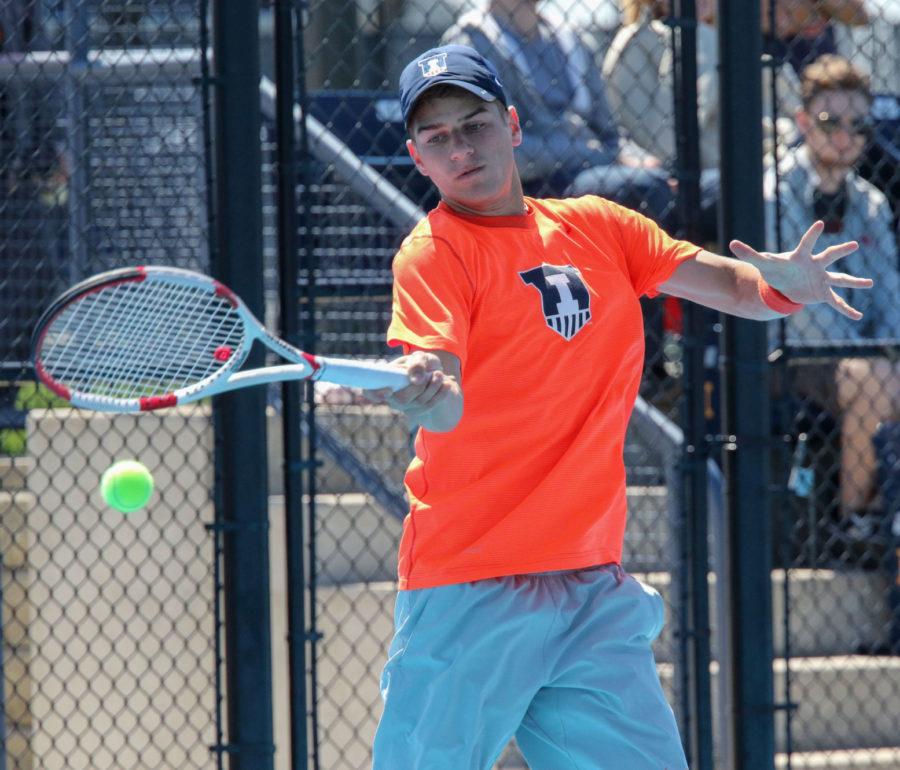 The Illinois men’s tennis team almost completed a perfect Big Ten season last weekend. Now, it’ll have to run the conference gauntlet again as it hosts the Big Ten Tournament from Thursday to Sunday. The Illini last won the tournament title in 2012.

With a win over Wisconsin on April 19, the Illini clinched a share of their first regular-season Big Ten title since 2005. Illinois has one loss in conference play, which was against Minnesota 4-3 on April 17.

“We’ve talked as a team about the situation … We’re moving forward,” said senior Ross Guignon of the loss to Minnesota. “Everyone’s getting dialed in and pushing each other.”

The doubles point will be crucial for Illinois this weekend. The team shook up its doubles line-up in mid-March, resulting in six-straight doubles points before the loss to Minnesota.

“We’re focusing on doubles because I feel like our singles may be one of the best in the country,” Vukic said. “Our doubles, if we get that, I don’t see us losing to many people.”

The Illini will most likely have to beat Ohio State again or Minnesota if they want to win the conference tournament. The aforementioned three teams tied for the Big Ten regular-season title.

Illinois has beaten Ohio State twice this year; however, OSU has been a consistent thorn in the side of Illinois in postseason play. Every other year since 2005, the Buckeyes have eliminated the Illini — Ohio State won the tournament in each of those years.

Over the last 20 years, Illinois is the only team to show any semblance of home-court advantage in the tournament. They’ve hosted the tournament two times over that span (1998 and 2005) and won each time — something no other school has done.

“It’s awesome,” Kopinski said of playing at home. “We get great crowds usually, so it’s going to be a lot of fun. Plus, the magnitude of the Big Ten Tournament hopefully brings more fans. It’s going to be a special moment for (the team).”

Playing at home is a unique situation for the senior class. While they were honored at a senior day ceremony against Nebraska, they ideally have five home matches remaining with the Big Ten Tournament and as potential hosts of an NCAA Regional.

“It is a very, very big impact.” Guignon said. “We’ve talked about not over-hyping the situation, so when the moment does come we’re ready,”