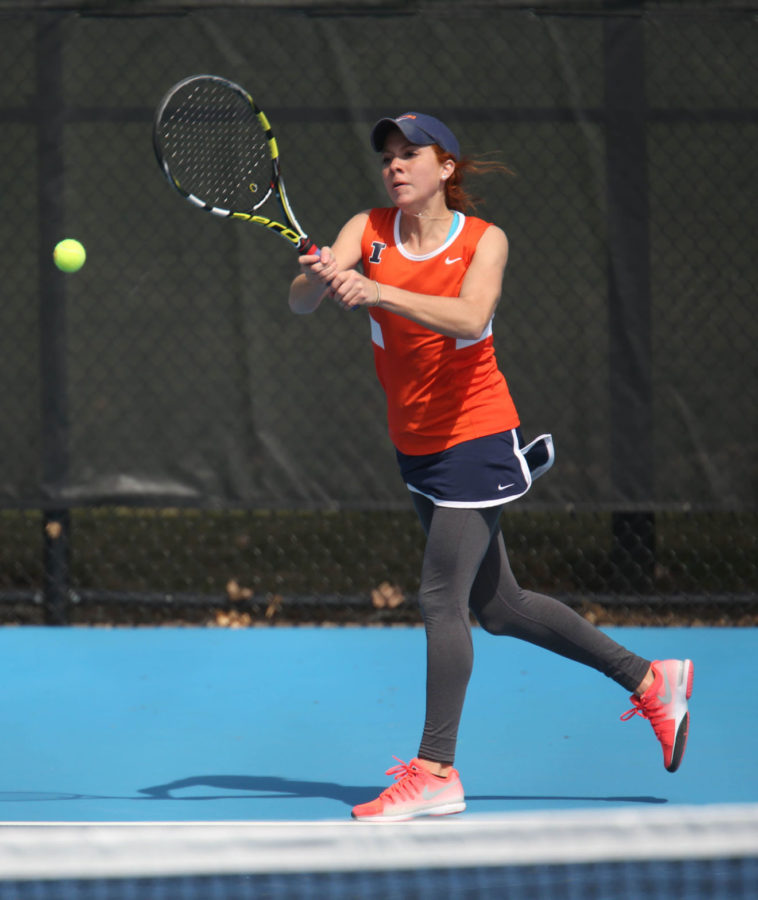 Illinois’ Madie Baillon attempts to return the ball during the match against Rutgers on April 5. The Illini will face Northwestern on Friday.

The last time the Illinois women’s tennis team went to Evanston, Illinois, on March 20, its players were confident that they would leave with a victory; however, the team suffered a 6-1 loss.

On Friday, head coach Michelle Dasso’s team returns to Evanston with much higher stakes. The No. 6 seed Illini open their Big Ten Tournament play against No. 3 seed Northwestern — the hosts of the tourney.

Illinois has since moved past the loss that followed with four more defeats, making for the team’s longest losing streak of the season at five games.

Dasso and her players know what is at stake this time around.

“We need to win in order to continue our season, not just in the Big Ten Tournament, but to get a bid in the NCAA tournament,” Dasso said. “We know what we’re playing for.”

Getting a win won’t come easily against Northwestern. The Wildcats have a storied history in the tournament to go along with their home-court advantage.

Northwestern has won 15 of the last 16 Big Ten tournaments, including a win at last year’s tourney (which they also hosted).

Dasso can’t remember the last time Northwestern was as low as a No. 3 seed and referred to Northwestern’s run as a dynasty.

Nevertheless, Dasso said she believes the pressure is on Northwestern because the teams are playing on their turf.

While the odds are against Illinois, the Illini are on a seven-game winning streak and are confident that they can beat the Wildcats.

“Unless you’re really inside our program, you don’t really think that we can win,” Dasso said. “Everyone internally in our program knows that we have a chance and that we certainly can get it done.”

Dasso said she wants her team to go out loose and relaxed on Friday but be prepared to fight against Northwestern.

Sophomore Madie Baillon said she knows she and her teammates will be prepared for the match and pointed out that this is certainly a different team than Northwestern previously faced.

“We’ve all improved since (our last loss to Northwestern),” Baillon said. “Everybody is ready to go back out there and give it another shot.”

Baillon said the team needs to look past the loss suffered to Northwestern and remember how well the Illini squad has been playing lately.

She said every player on Illinois is more confident than the last time the two teams met, and sophomore Jerricka Boone agreed.

There are three options for where the motivation to beat Northwestern comes from for Illinois: getting to the post-season, a revenge game and the fact that nobody outside of the program believes that Illinois can win.

In response to these options, Dasso answered “all of the above.”

Dasso noted that team chemistry is as high as it could be. She said it’s all about being relaxed and building memories.