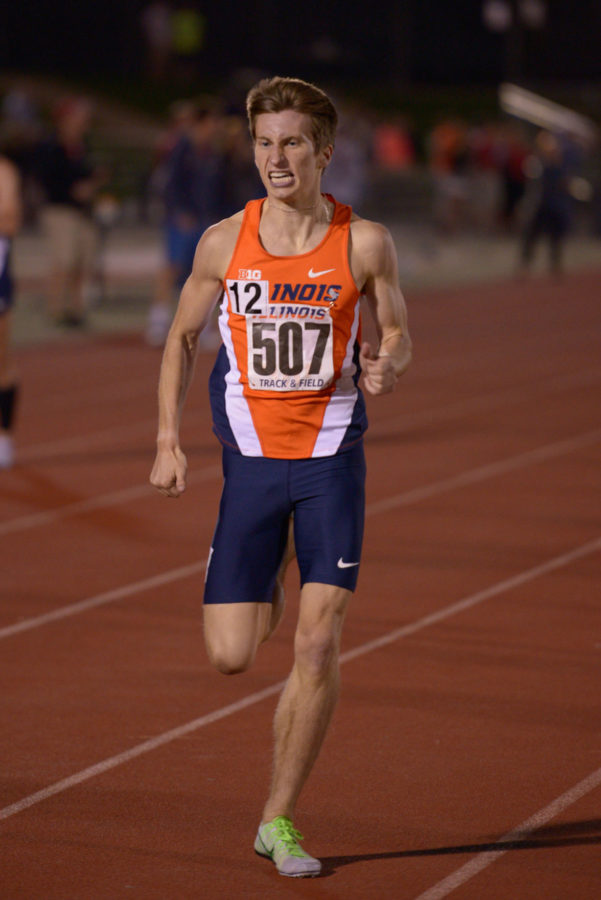 Illinois’ Ian Barnett keeps a brisk pace in the men’s 1,500-meter run at the Illinois Twilight meet on April 18.

The Illinois men’s track and field team brought the Hy-Vee Cup back home for the third-straight year, finishing first at this week’s Drake Relays.

“Our performance this weekend was outstanding,” Turk said. “The thing that those guys continue to do well, and did exceptionally well this weekend, is go out and compete … The fact of the matter is that winning is fun.”

Hammon finished the first leg of the two-day decathlon in 10th place with 3,543 points, while Wayda accumulated 3,296 points to finish in 19th place.

Four more members of the team joined Wayda and Hammon in competition Thursday. Junior distance runner Ian Barnett provided the highlight of the day, capturing the 5,000 meters title with a time of 13:56.16, the third-fastest time in Illinois history in the event.

The second day of competition included milestones for another Illinois distance runner. Senior Brendan McDonnell recorded a personal best time of 30:16.28 in the 10,000 meters.

Friday marked the beginning of Illinois’ quest to capture the Hy-Vee Cup for the third year in a row. The 4×800 meter relay team grabbed the Illini’s first points in the cup race.

Saturday, the final day of the competition, was full of highlight performances from Illinois competitors. The sprint medley and 4×400 teams each claimed first place in their final races, the 4×100 meter relay team came in second behind Arkansas and the distance medley team scored the final points for the Illini, who clinched the Hy-Vee Cup for a third-straight year.

Notable individual performances include junior Cam Viney and sophomore David Kendziera finishing first and third, respectively, in the 400-meter hurdles, and junior Dylan Lafond’s time of 8:56 beat the entire field in the 3,000-meter steeplechase — the first time he had run the event in college.

Though it was a team effort, senior DJ Zhan’s individual contribution was vital to the Illini’s Hy-Vee Cup victory. The Morton, Illinois, native turned heads with his performances at the Drake Relays.

“What was amazing to me was how many people I heard talking about him,” Turk said. “DJ (has) made a name for himself and has really had an incredible year.”

Zhan acknowledged his coach’s praise, but attributed his achievements to more than just hard work.

“I wouldn’t be doing as well as I am if it wasn’t for my teammates,” Zhan said. “They push me every day in practice, and I want to do well to set a good example, especially for the younger guys.”

The Illini’s next meet is the Musco Twilight in Iowa City, Iowa, on Saturday. Turk said he hopes that the success and lessons learned from the Drake Relays will carry over to the upcoming meet.

“The biggest thing for us right now is that we have a few guys who are a little banged up,” Turk said. “We have to get those guys healthy, and make sure that everyone is taking care of their recovery.”