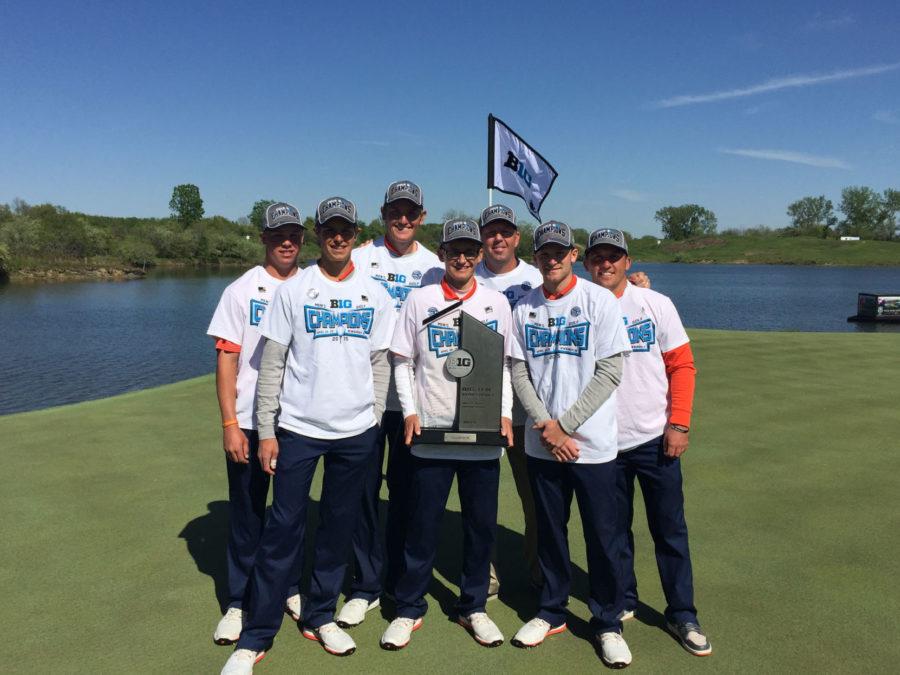 The Illinois men’s golf team received its biggest contribution from an often overlooked source at this weekend’s Big Ten Championships.

Freshman Nick Hardy gave his best performance of the season, shooting a combined 4-under-par 284, tying him for first place on the individual leaderboard with Iowa’s Carson Schaake. As a team, the Illini finished 32 strokes ahead of Iowa, the second-place finisher — the win was Illinois’ sixth conference tournament win in seven years. The tournament was held at the Victoria National Golf Club in Newburgh, Indiana.

Illinois head coach Mike Small had nothing but good things to say about his star freshman’s performance through tough Indiana weather.

“When our first guy, Nick Hardy, goes out and shoots 4-under-par in these conditions and on this golf course, that sends a message,” Small said.

The freshman was not the only Illini to have a noteworthy performance. Recently crowned Les Bolstad award winner for the lowest season stroke average in the conference junior Thomas Detry finished in third place with a score of 286. The entirety of the Illinois starting five finished in the top 11 in individual scoring, with no golfer shooting above a 5-over 293.

Great individual showings by all members of the team led to a dominant final score. Illinois took the lead on the first day of the tournament and never relinquished it.

Small said his team’s dominant showing means his players are rallying and feeding off each other’s momentum.

“When you have Brian Campbell go out and get over par with a double-bogey early only to come back and shoot 3-under, the team feeds off that. For those guys to go out first and set the standard and the pace for the rest of the team, that’s important.”

Illinois was the only team to figure out the tough Victoria National Golf Club. With a course rating of 75.3, and a par of 72, the course leaves very little room for error.

In the field of 14 competitors, Illinois was the only team to finish under par, finishing with a score of 1138 (-14). Big Ten rivals Iowa and Minnesota rounded out the top three.

The Big Ten Championship is the last tournament Illinois compete in before the NCAA championships. Not competing until May 14, Illinois get a rest from competition before attempting to capture the NCAA Championship.

Small hopes that the confidence built during the Big Ten Championships can continue throughout the NCAA Championships.

“That’s the whole point,” Small said of continuing momentum. “I was really happy with the way we performed the past few days.”