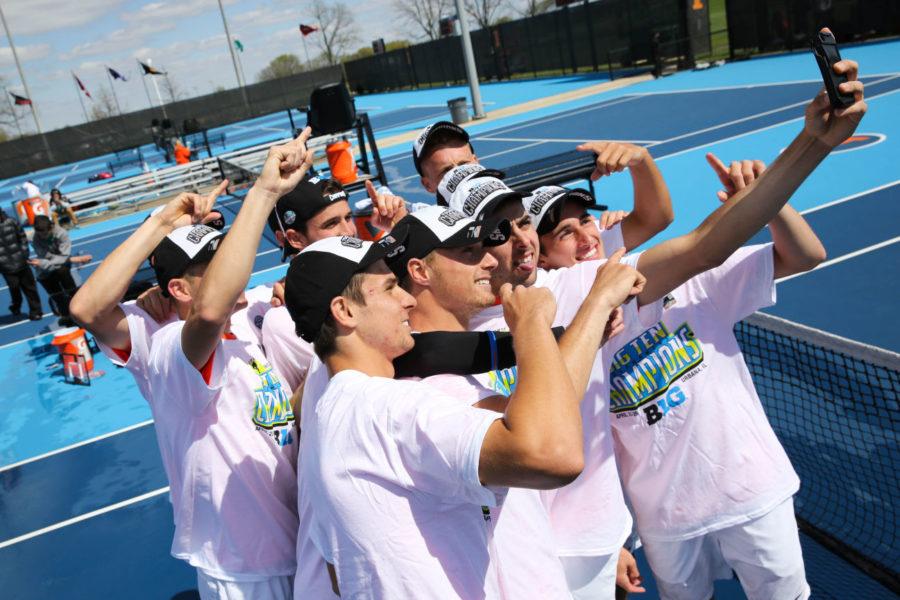 The Fighting Illini men’s tennis team take a picture together as champions after the Big Ten Men’s Tennis Tournament final against Ohio State at the Khan Outdoor Tennis Complex, on Sunday. The Illini won 4-0.

This weekend brought the Illinois men’s tennis team a Big Ten championship. It also brought the return of senior Ross Guignon and freshman Toshiki Matsuya to the singles court. Matsuya hasn’t seen action since March 29. While Guignon has been contributing on the doubles court with freshman partner Aron Hiltzik, he had only played singles in two matches since February: April 4 at Michigan State and April 12 vs. Nebraska.

Guignon got off to a great start in the championship match against the Buckeyes. He opened up with a 6-0 first set against No. 97 Ralf Steinbach. He then lost the second set 0-6, and was down 3-4 when play ended. Head coach Brad Dancer was very active in coaching Guignon during his match on Court 6.

Matsuya looked good in his action on Friday against Iowa. He was dynamic on the court, producing some highlight-reel plays, successfully reaching balls all over the court. The team has talked about Matsuya being the best mover on the team, and he demonstrated some of that ability on Friday.

Senior Blake Bazarnik, who played five of the last six matches before the tournament at the No. 6 singles spot, didn’t see any playing time this weekend.

Success for Gosea and Vukic

The doubles pair of freshman Aleks Vukic and senior Farris Gosea finished the regular season strong and continued that success during the Big Ten Tournament. In doubles, the duo went 2-0 and didn’t finish against Northwestern.

In singles, they were the only two Illini to claim victories on all three days of the tournament.

When the two were on, it was hard for the opposition to take a game. On Friday, Gosea/Vukic and the rest of the doubles teams lost their first sets to Iowa, but rallied. In Gosea and Vukic’s match, Iowa would take one more game — the Illini pair won 8-2. Gosea and Vukic pulled away to an 8-2 victory on Sunday in a doubles battle against Ohio State.

Vukic was the first Illini to finish in singles on both Saturday and Sunday. He fought through a long back-and-forth first set with Northwestern’s Fedor Baev, 7-6 (7-3) on Saturday. No 66 Vukic took over and shut out Baev 6-0 in the second set to put the Illini on the board in singles. He tied a school record for most total wins in a season with 42.

No. 45 Gosea fought through a tough match on Sunday to beat No. 47 Mikal Torpegaard 6-3, 6-2. He also handled his other opponents in straight sets, beating Northwestern’s Strong Kirchheimer 6-3, 6-2 and Iowa’s Lefteris Theodorou 6-4, 6-1.

The team held its tennis banquet Sunday night. Junior Jared Hiltzik took home MVP, senior Tim Kopinski won the Strength and Conditioning Award for the third-straight year, Guignon won the Fighting Illini Spirit Award for the second time and Vukic won Player to Watch… The Illini have won nine Big Ten tournaments in the last 20 years, but never swept every opponent en route to a title. They accomplished that feat this weekend… The weekend brings another Big Ten Championship T-shirt and hat to the Illini’s closet.

The team also received shirts and hats after claiming a share of the regular season Big Ten title… The Illini are undefeated playing outdoors at the Atkins Tennis Center this season… As anticipated, the Illini coaches received Gatorade baths after the championship was clinched by Aron Hiltzik. Guignon dumped a cooler on Dancer while Vukic and Alex Jesse doused associate head coach Marcos Asse… Guignon dunked on Aron Hiltzik with a mini-basketball and hoop while Hiltzik was being interviewed by a television reporter. Guignon said the dunk was one of his finest yet.