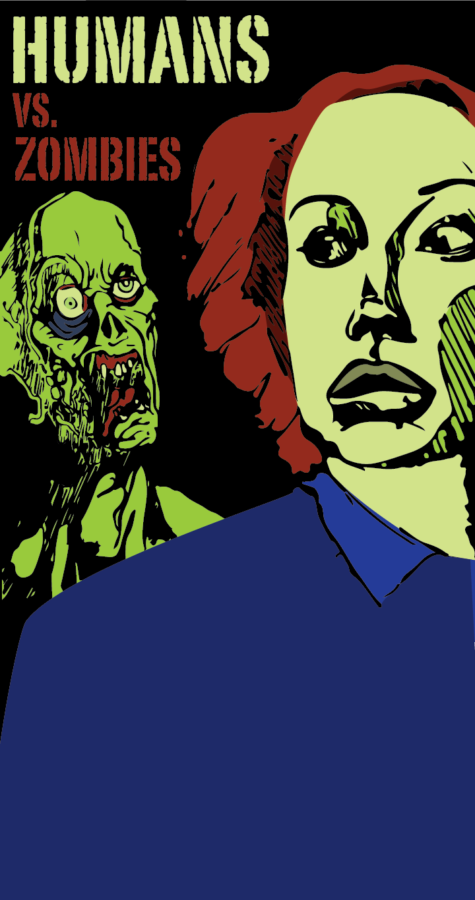 It was a night near Halloween. The humans scurried toward the hill in the Arboretum in hopes of completing their final mission. With only the moon as their source of light, they began building a fort they were asked to create.

But then zombies, cloaked by the darkness, began to creep up the hill. They surrounded their unknowing opponents and waited with anticipation for the right time to strike. As soon as a yellow headband was spotted, there was nothing left to do but run. The previously silent garden was now filled with screams as the humans sprinted down the hill and scattered into the darkness, terrified by the thought of a zombie’s touch. Some lost their way in Orchard Downs. Others were not able to get away and became what they previously feared the most. But it was only a game: Humans vs. Zombies.

That night was an experience that most players said they would never forget.

“It was like a zombie movie, where the humans are getting chased down a hill while zombies were running after them,” said Bret Kersting, Humans vs. Zombies mediator and senior in LAS. “It was absolutely epic.”

Humans vs. Zombies, also known as HVZ, is a game offered to anyone on campus that is willing to withstand days of paranoia. There are two games during the fall semester and one game during the spring semester. It involves two different teams, one being the humans, the other zombies. The goal of the zombies is to tag as many humans as possible, while the humans try to avoid being tagged for as long as they can. Zombies can tag humans at any moment during the game except when they are within the safe zones: anytime they are indoors, anytime they are 15 feet from a dorm, and anytime they are at work or an RSO event.

“The way that I would describe it is, a campus-wide, week-long, modified game of tag that takes place anytime you are outside,” Kersting said.

The spring game started on April 14 at midnight, with everyone wearing blue headbands, the visible indication of a human. Among these players, however, are three to four original zombies. Once a zombie tags their first human, the victim switches to a yellow headband, which is the recognizable sign of a zombie. Zombies then try to convert as many blue headbands as possible by tagging their opponents. Humans, however, can avoid getting tagged by throwing socks at the zombies, which “stun” them for a certain period of time.

“The uniqueness of it all is what made me attracted to it,” said Delvan Willis, HVZ executive board member and junior in LAS. “When I first saw the game going on, I was confused of what people were doing and why people were running around and throwing socks. I think that it is these type of questions that make people interested in it.”

In addition to the main objective of the game, each day there are various missions that the humans must complete, while simultaneously trying to avoid the zombies attempting to stop them. The missions can vary from solving a puzzle or escorting someone to a designated place; however, all of the missions correlate with the backstory of each game. The final mission is given Sunday, and if completed by the humans, they ultimately win the game. Willis said the missions are what truly test players’ quick-thinking and dexterity.

“It makes you feel like you are challenging yourself, but you also feel a sense of pride when you finish a mission,” he explained.

HVZ is a well-known game created by Gnarwhal studios in October 2005. It originally started at Goucher College in Baltimore and eventually spread nationwide, reaching the University campus in 2010.

Jen Alinger, president of HVZ and sophomore in Engineering, thinks this rise in popularity is due to the unique quality the game brings to people’s everyday lives.

“It’s a nice break from the monotony of classes,” Alinger said. “It’s something different to do. You still have your daily routine, but it somehow is a little bit better because you have to avoid zombies or have to chase the humans.”

Joe Sklover, co-founder of HVZ and Gnarwhal studios, said that the game is a helpful tool in bringing people together to create a community. He has run the game in many conventions and even various corporations as a team-building exercise.

“It gets a rag tag group of people together,” Sklover said. “Where else are you going to see the captain of the lacrosse team defend the life of a kid that is in the magic club?”

Alinger also agreed that meeting other people is an important aspect of the game.

“I personally have made most of my closest friends through this game,” Alinger said. “It introduces you to people that you would have never met otherwise.”

In addition to HVZ’s emphasis on community, Kersting believes that the game also allows students to explore the campus in a fun and interesting way.

“For freshman, it is a great way to see the campus and a great way to learn about where everything is,” Kersting said. “People find the most random ways to get around campus without having to step foot outside.”

Currently Sklover said HVZ has 2,282 games and 141,000 registered players through Gnarwal Studios. He said the purpose of the company in regards to the game is to make sure that HVZ is free for everyone. In addition, they also offer different software to help manage larger HVZ games, including the one at the University. He also said that anyone is welcome to start a game and modify any rules to their pleasing.

“It is a fun option that will guarantee you the opportunity to meet new people,” Sklover said. “It is just going to introduce you to all these new people and all of these new creative minds. From TAs, to students, or even professors, all are welcome to join in on this apocalyptic adventure happening again this fall.

“It is a great way to explore (and) get involved, and the community is just amazing,” Kersting said. “Win or lose, everyone has a great time.”