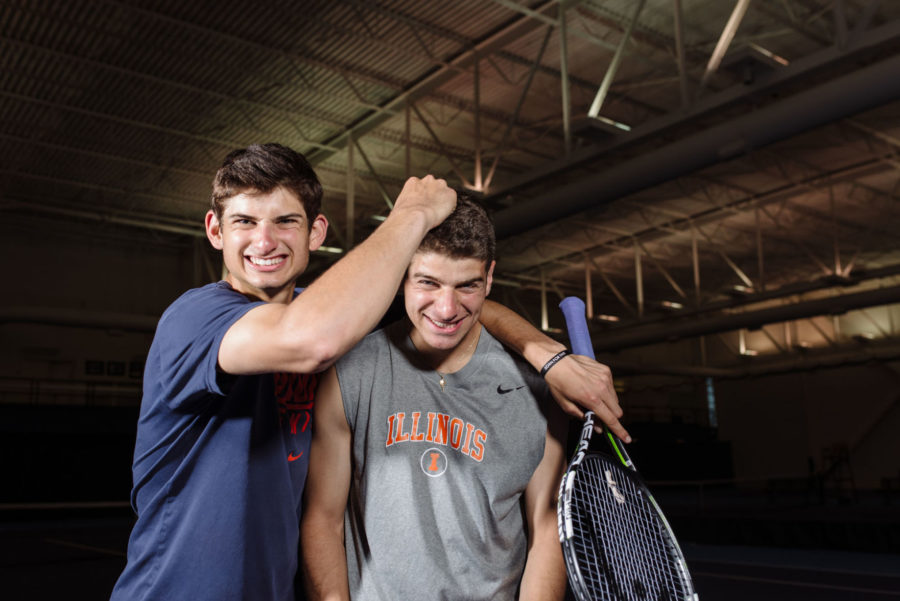 It wasn’t just match point, it was championship point. Aron Hiltzik tried not to look over at Court 1, where his brother Jared was locked in battle. He tried not to think about the sea of orange and blue holding its breath behind him with the Illini men’s tennis team up 3-0 over Ohio State in the Big Ten Tournament final. He tried to ignore the sound of the wind whipping against the banners that surround the courts at the Atkins Tennis Center.

He served. He powered balls from the baseline until his opponent’s shot dropped against the net. Aron dropped everything — he was swarmed by teammates and congratulated by supporters. A few minutes later, he embraced his brother. Nothing had to be said. He had made his older brother proud.

“He’s the best role model I could have,” Aron said. “You could tell. The way he hugged me, the way after … you could tell how proud he was.”

It’s been a long road for the Hiltzik brothers to get to this moment, but they’ve always been together. The pair complements each other, they admire each other and they are always there for each other. Teammates once again as Illini, they’ve grown closer and that has helped Aron to grow up.

Aron arrived on campus in the fall of 2014 and it didn’t take long for the Hiltziks to pick up where they had left off at home.

In a mile run before the start of the season, Aron was ahead of Jared. Entering the final lap, Aron led by a few seconds. Jared looked up — he couldn’t have that. Jared sprinted to catch up to his brother on the final straightaway. The final results: Jared: 5:17, Aron: 5:18.

It’s a respectful competition between the two brothers. They’ve always been great friends, even though their personalities and playing styles are polar opposites. Their mother, Arlyn Stern-Hiltzik, said she never remembers the two fighting.

While Jared always had to show he had the upper hand as the older brother, whether in winning a mile or riding in the front seat of the car, they’ve always gotten along.

“They were always very, very close, and always competitive,” Arlyn said. “They always had the same coach, always did the same.”

After two years apart, they are back on the same team this year. The brothers have been essential to the Illini’s success. Jared is the team’s No. 1 singles player as a junior and has put together a 19-2 record this spring. Aron is 17-3 as a freshman and has won 15 matches in a row.

The brothers both say they’ve developed an even stronger bond on campus than when they lived under the same roof in Wilmette, Illinois. Arlyn thinks it’s because they share so much now.

A few years ago, the brothers ran together through the neighborhoods around the New Trier High School tennis courts. The boys were late to school practice after coming from private tennis practice and had to run as punishment.

The two only had to run together for a year and a half with the Trevians. While Aron had always played on a younger baseball or soccer team, the brothers got a chance to play side-by-side as the team’s top two players.

Midway through 2012, Jared’s senior year, they decided to leave the team to focus on individual juniors tournaments. Both carried high rankings that they wanted to maintain. Leaving the team was a show of solidarity for the brothers.

“They backed each other up to leave,” Arlyn said. “It was a cool buddy-buddy thing. They weren’t treated very fairly about something that happened. They looked at each other and both said, ‘We’re not going to take this.’”

When Jared went away to Champaign, it was the first time the brothers weren’t training together. But Aron frequently visited his brother and started to become a part of the team, two years before he would officially become an Illini.

Brad Dancer, head coach of Illini men’s tennis, was interested in Aron as a recruiting prospect almost as soon as he met Jared. While seeing Jared play at a tournament, Arlyn said she remembers Dancer asking to see “Baby Hiltzik.”

While Dancer gave Aron space to consider other schools, Jared wasn’t as accommodating. Aron’s college decision came down to Illinois and Georgia, another tennis powerhouse. Arlyn said she posted a picture on Facebook of Aron holding hats of the two schools, pondering his decision. When Jared saw the photo, he had none of it.

“Jared was pissed,” Arlyn said. “He goes ‘Aron, you can’t even consider another school. We need you. We need you here at our school.’ And that was it, that sealed the deal.”

“It just made a really homey feel and an atmosphere that I really wanted to be a part of,” Aron said.

While Aron made his college commitment early, he also decided to go away for his senior year of high school. Instead of finishing at New Trier, Aron attended the Junior Tennis Champions Center in College Park, Maryland.

His previous private coach, Billy Heiser, was leaving to coach on the ATP Tour full-time, and he recommended the program to Aron. Despite that, Arlyn had worries. But the final factor for the family was when Aron lost the senior parking lottery for the school year. Arlyn was also sold when New Trier said that Aron could still graduate.

Leaving forced Aron to mature. He was getting himself up at 6:30 a.m. to walk over to the tennis facility, doing his own laundry and cooking his own meals.

While it was a tough transition for Aron, it was also hard for Jared.

Even when Jared was away in Champaign for his freshman year, Aron was only a car ride away. Now, he was across the country. For brothers who had always been together, it was a new experience.

“I’ve always been with him,” Jared said. “That was really hard … when I went home and he wasn’t there, that was a pretty difficult thing for me.”

From infancy, Jared and Aron have been different.

“Jared was colicky, so he just cried and cried. We have this swing, and we would put him in this swing and he would just yell,” Arlyn said. “Two years later, I have Aron and he’s in the swing nice, looking around and he’s calm. My husband goes, ‘I guess that’s how it’s supposed to be.’”

Those same temperaments are present today. Arlyn said that Jared has always been a worrywart. He’s always been organized, while Aron is lackadaisical. The contrast also extends to the tennis court.

A central tenet of Dancer’s program is playing focused and purposeful points. Jared is a poster-child for Dancer’s approach. In junior tennis, Arlyn said that Jared could have a terrible attitude on the court. Now, he is always mentally locked in and strategic with his play. While Aron is more “free,” he’s working on becoming more of a focused player with the guidance of his brother and Dancer.

Aron attributed his composure at the Big Ten tournament to bringing more focus to the court. While earlier in the year, he said that he got distracted by the atmosphere, he’s improved at blocking it out.

“Jared was much more of a cerebral player before coming to college, but Aron was able to watch him for a number of years,” Dancer said. “We joked last year, he played a couple of “Jared Hiltzik” type matches and we thought that was a positive thing.”

While Aron’s mental game is improving, Dancer wants to make sure that he still is able to stay true to his personality while following his brother’s example.

“They both look up to each other about certain things,” Arlyn said.

While their personalities are opposites, both Jared and Aron hold themselves to extremely high standards.

“I’ve been able to push him hard. And he has people around him that expect a lot from him, including myself,” Jared said. “Sometimes maybe I expect too great of things. I just push him even harder here.”

Though Aron is growing, Jared is still the big brother. At a tournament last summer, the two met in the finals. Arlyn said that Jared had maxed out on his tournament payout, but since Aron was new, he could still win prize money. She was told the brothers agreed that Aron would win.

Jared went up 5-3 over Aron and reached match point before setting his racket down and walking to the net to shake his brother’s hand and concede the match.

The Big Ten championship is not the end goal for the Hiltziks and their teammates. They have national championship aspirations, and Sunday, surrounded by fans, teammates, and his brother, was just one of the first big moments for Aron Hiltzik.

“No offense to that moment,” Dancer said, “But he’s got bigger moments in his mind.”