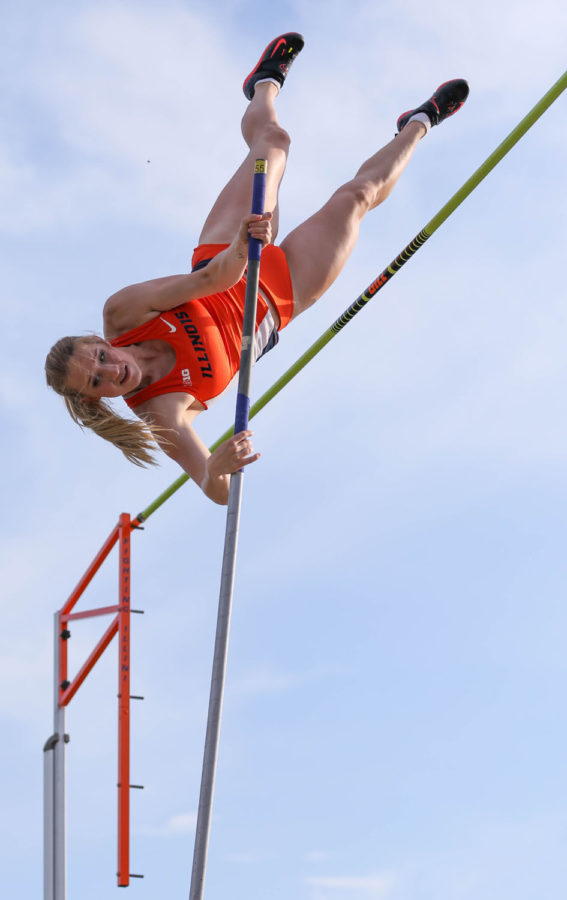 Illinois’ pole vaulter Jennifer DeBellis attempts to clear the bar during the Illinois Twilight invite at The Illinois Track and Soccer Stadium on April 18.

The Illinois women’s track and field team was originally scheduled to compete at the Bill Hayes Invite in Bloomington, Indiana, this weekend, but due to the possibility of the invite not having enough teams to compete, the Illini were admitted to the Rankin/Poehlein Invitational.

Illinois will travel to West Lafayette, Indiana, on Saturday for the Invitational.

Garner said he expects tough competition this weekend. In preparation, he said the team has been working on timing, technique and “working out kinks.” Some of the teams Illinois will compete against include host Purdue, Western Michigan, Ball State and Marian University.

“This will be a meet that we’re looking forward to because it doesn’t involve too much travel,” distance coach Scott Jones said.

The trip to West Lafayette is just under two hours from Champaign-Urbana by car.

Junior Britten Petrey and freshman Valerie Bobart will compete in the 3000-meter steeplechase. Petrey, who was out sick last weekend for the Drake Relays, said she is excited to return to competition. Her goal is to set a personal best — last time out, she finished second in the 3000-meter steeplechase at the Illinois Twilight Meet. Since recovering from her illness, Petrey said she is focusing on rest and hydration to prepare for the weekend.

Sophomores Nicole Choquette and Lindsey Rakosnik and seniors Amanda Duvendack and Chloe Schmidt will be running the 4×800 meter relay. Jones said he expects the MAC schools, including Western Michigan and Ball State, will be particularly competitive in the event.

Sophomore Kandie Bloch-Jones will compete in high jump; an event Garner expects to be one of the most competitive at the meet.

McKeeman will be making an Indiana homecoming. She is from Fort Wayne, Indiana, and her brother — Jon McKeeman — is a junior basketball player at Purdue.

DeBellis said she is feeling good going into Saturday because of her performance last weekend, when she cleared a personal record of 4.05 meters.

In preparation for this weekend, DeBellis said she will go about the invite as if it were a practice.

“There’s no need to worry or fear about any of the competition,” she said.

Jones said he expects there will be large numbers of season best and personal bests set on Saturday. At the Drake Relays, DeBellis was the only Illini to set a personal best.

“I think this will be a great opportunity for us to sharpen up before we go into exams and the Big Ten Championships,” Jones said.