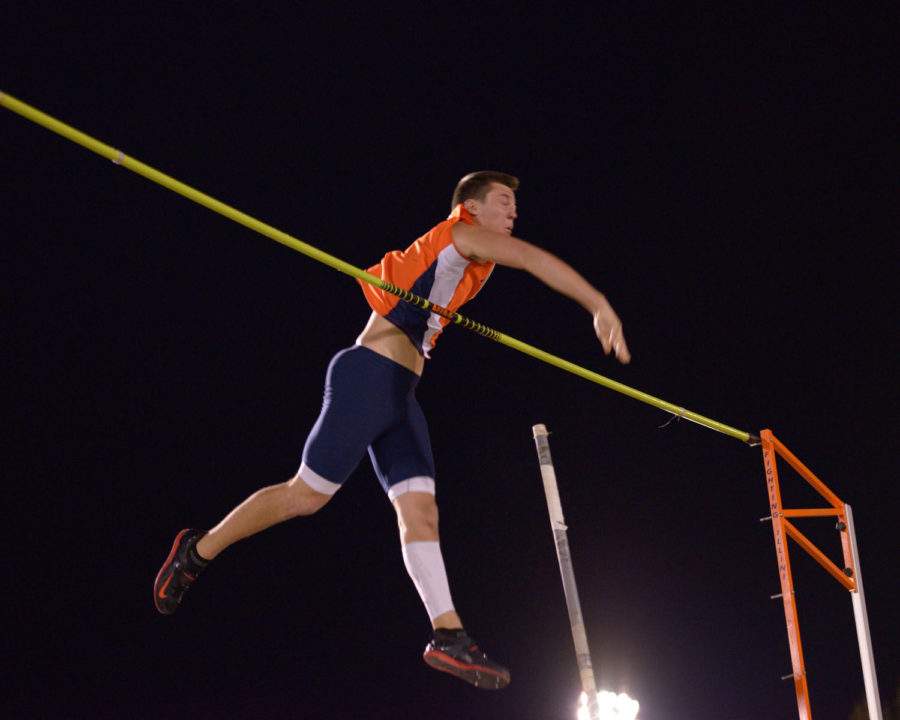 Illinois’ Mitch Mammoser releases the pole as he swings over the bar during the poll vault event at the Illinois Twilight Meet.

Following its biggest win of the season at Drake Relays and two weeks away from the Big Ten Championships, this weekend is a different one for the Illinois men’s track and field team.

The Illini will wrap up their regular season this weekend at the Musco Twilight meet in Iowa City, Iowa.

With the Big Ten Championships on the horizon, head coach Mike Turk is taking an alternative approach this weekend.

“We’re not really focusing on any kind of team competitiveness this weekend,” Turk said, “We will run almost everyone, but we have some guys who we’re looking for to put up some better performances as we move towards the peak time of the year.”

One concern for teams this late in the season is overextending its athletes, which Turk is working to avoid.

“Running as many races as we did last weekend and competing as hard as we did, this weekend we’ll take it a little bit easier,” Turk said. “We’re not going to run the 4×100 meter relay. We just don’t need to stretch those guys out that way this week. We don’t really have anything to gain from doing that right now.”

Senior Corey Hammon and sophomore George Wayda will not compete this weekend — they both participated in the decathlon at Drake Relays.

Other athletes will compete in events that aren’t their usual races. Junior Cam Viney and sophomore David Kendziera will run the 200 meters this weekend in order to “lighten up their load and do something fun for them,” according to Turk.

Practices in preparation for this weekend have changed as well: The coaches want to give the athletes more recovery time this late in the season. The team is running more, but doing less in the weight room, decreasing reps but increasing intensity.

“It’s kind of like a taper system where we’re just slowly doing less and less, getting ourselves more in prime running form,” Kendziera said.

Junior Mitch Mammoser, who did not compete last weekend at Drake Relays, is eager to get back into the heat of the competition.

“Everything’s starting to click as far as me and what my coach has to say,” Mammoser said, “Coming off of our home meet I finally broke the 17-foot barrier (in pole vault), which was big for me. Right now things are at an all-time high.”

The Illini are a part of an eight-team field that includes Bradley, Iowa, Illinois State, Minnesota, Nebraska, Northern Iowa and Wisconsin. The field events will kick off the meet, starting at 2 p.m. on Saturday.