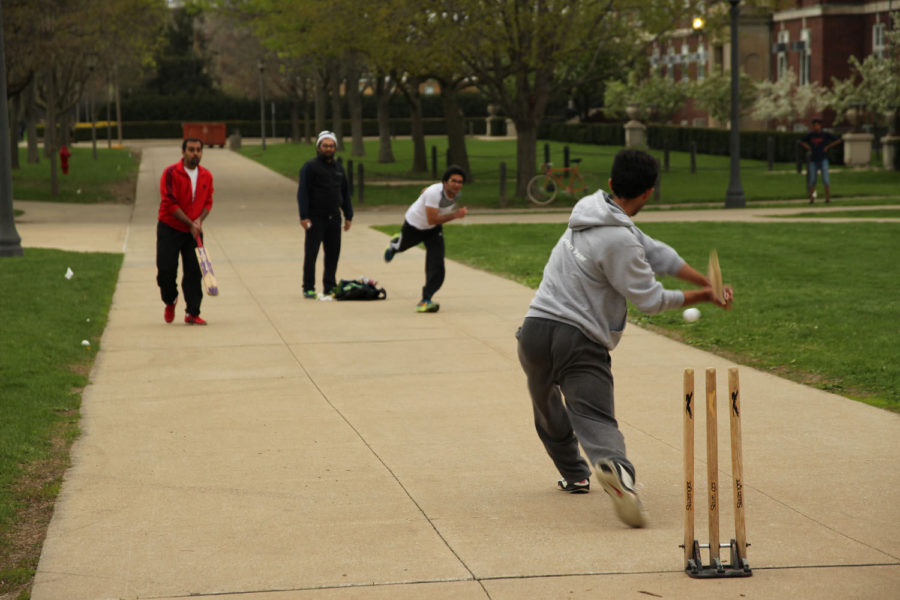 Students play cricket on the South Quad on April 24. Participants are members of the Cricket Club of Illinois, a registered student organization. Cricket tournament finals will be Sunday on the South Quad.

Every Friday night since April 4, the South Quad has transformed into a cricket field.

Over 100 people, mostly from Pakistan, India and Bangladesh, spread out across the lawn to play cricket for recreation. They also prepare for their upcoming tournament finals, which will be on Sunday on the South Quad.

Some of the cricket players are undergraduate students; some are graduate or Ph.D. students. A few aren’t students at all, who simply come out to participate in a sport they grew up playing. A combination of international and American students with South Asian backgrounds are present, and they all speak to each other in Hindi or in the colloquial twist of Punjabi.

Most of the players are members of the Cricket Club of Illinois, an RSO that was founded in 1985 with the goal of uniting students with a similar passion for the game.

“Cricket dominates the sports aspect of South Asia,” said Salman Khan, junior in LAS and president of the RSO. “People compare it to religion.”

During the Friday matches, several pairs of teams play against each other and rotate, as sounds of laughter, chatter, shouts and cheers from players who forge connections with the people they either grew up with or met at the University reverberate. Those who aren’t currently playing in a match sit back and watch, immersed in the game as they wait for their turn to play.

Ahmed Sadeque, Ph.D. candidate in Engineering, is treasurer of the RSO and has assisted in the cricket tournament’s setup. He said cricket is the sport regularly played in his home country of Pakistan, and its significance extends beyond the game itself.

“This has cultural significance for us,” he said. “Any kid who is raised in South Asia – especially Pakistan, India, Bangladesh – they’ll start playing cricket at 5 or 6 years old. So it has a huge significance in our lives.”

Khan said the sport also appeals to people who are not part of the South Asian community.

“We’ve had people who grew up in the United States playing baseball join us,” he said. “We make sure everyone knows it’s an open thing; anybody’s welcome to join, and we encourage that.”

The cricket matches on the South Quad are not only a way for people to learn about the sport and have the opportunity to play, but they also expose people to the cultures and religions of the players, Khan said. Most of the players are Muslim, but there are also Hindus and Sikhs who play.

Sadeque added that the diversity represented at matches also allows for participants to learn more about the cultures and values of fellow cricket players and to make friends from other countries.

Ashwin Bharadwaj, Ph.D. student in Engineering, is an active member of the Cricket Club of Illinois and a regular at the Friday night matches. Bharadwaj, who is originally from India, said cricket has been a unifying force between people of different South Asian nations, and it serves as a way to contradict mainstream depictions of constant tensions between the countries.

“I think cricket is a binding sport for us, especially India and Pakistan,” Bharadwaj said. “You can see a lot of camaraderie between players, at the international level and over here as well. I have a lot of Pakistani friends from cricket. We’ve got a lot of tension on the border. Cricket was something that used to unify us.”