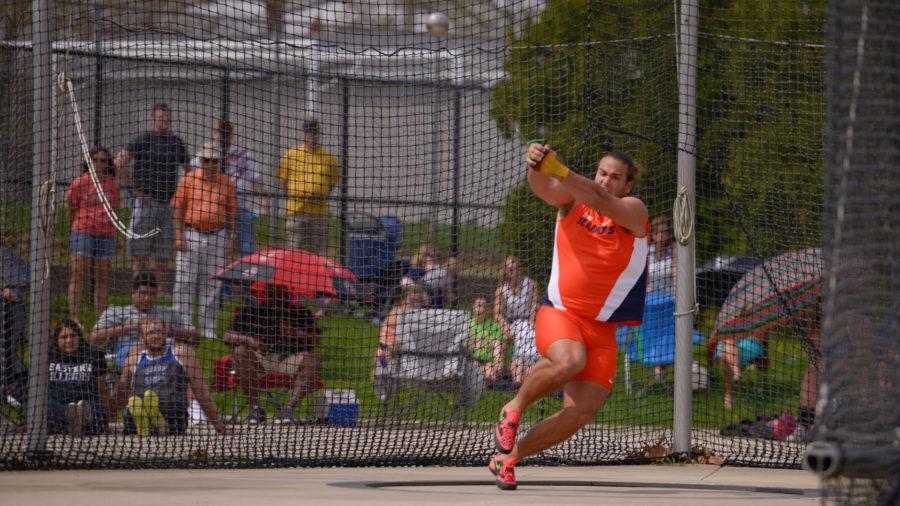 Illinois’ Davis Fraker winds up for the throw during the hammer throw event at the Illinois Twilight meet on April 18.

With the Big Ten Outdoor Championships less than two weeks away, little time remains for the Illinois men’s track and field team to sharpen its skills.

Despite the fact that there was no team competition or silverware on the line, the Illini had yet another solid showing Saturday in Iowa City, Iowa, at the Musco Twilight.

“We had really well-rounded performances from everyone across the board,” said head coach Mike Turk. “We weren’t really looking for a huge team performance, because this (meet) is more about cleaning some things up to get ready for (Big Ten Outdoor Championships).”

The Illini competed in 13 of 19 events. Two members of the team had their names etched in the Illinois record book Saturday. Senior DJ Zahn won the 200 meter with a time of 20.53 seconds, replacing the time set by Anthony Jones in 1994.

Fraker was satisfied with his mark despite the early problems he experienced leading up to the throw.

“I struggled all day with the technical things,” Fraker said. “I got so frustrated right before my last throw I just decided that I was going to throw far, and if I fouled, so be it. It turned out to be a pretty good throw.”

Turk was more than pleased with both of his seniors, and marveled at the separate journeys each had to take to become leaders on the team.

“For DJ, it’s been a slow and steady progress over a long time, whereas Davis started out as a freshman on a high level and is now on this meteoric rise,” Turk said. “It’s been a very different situation for both of those guys, but it’s been really fun to watch and experience.”

There were four Illini regulars absent from the Musco Twilight. Juniors Joe McAsey and Dylan Lafond, freshman Garrett Lee and senior Jannis Toepfer spent their weekends on the West Coast, competing in the Payton Jordan Invitational in Stanford, California.

Illinois has no meet scheduled for the upcoming weekend. The team will travel to East Lansing, Michigan, for the Big Ten Outdoor Championships from May 15 to 17.

Both coaches and athletes are looking forward to the brief hiatus before postseason meets start.

“I typically have my best meets after an off-weekend,” Fraker said. “I expect that it will do nothing but help myself and the team.”