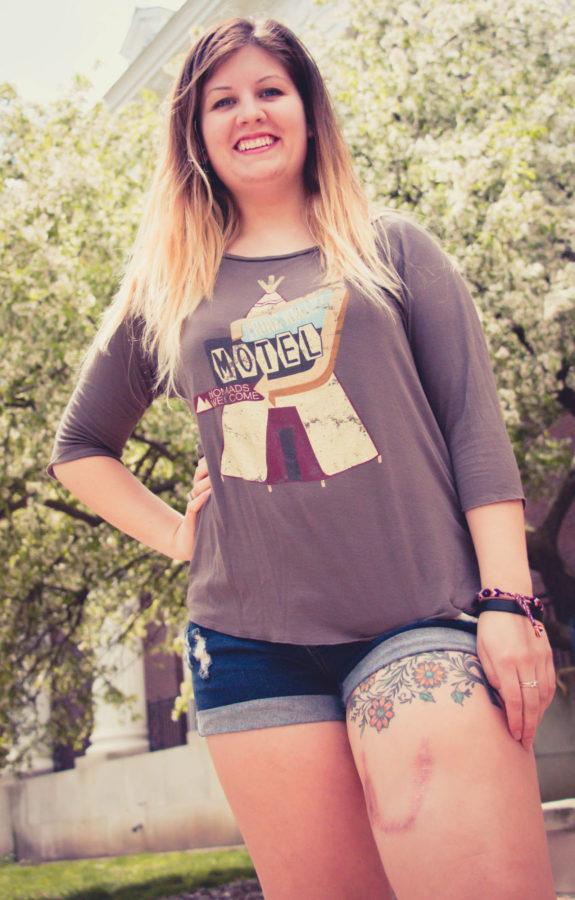 In October, Kaitlin Johnson got a tattoo.

She stood patiently as the tattoo artist inked delicate orange and blue flowers connected by a green vine around her leg. The needle hurt, of course, but she was tough. After all, it wasn’t the first time she had felt pain. Two hours later, the artist added the finishing touch: a cancer ribbon.

Johnson’s tattoo sits between two scars on her leg, the first where she got lymph nodes removed from her groin and the second a U-shaped scar where she had skin cancer.

Looking down at her leg, the ink signified the end of her pain. She finally had a scar that was on her own terms.

In honor of Melanoma Monday, a national commemorative day for skin cancer, Johnson shared her story in hopes of raising awareness.

Until last summer, the only mark on her leg was a small mole, not even the size of a pencil eraser. When Johnson’s mother first noticed it, she asked if there was a bug on her leg.

Johnson, a senior in LAS, said she noticed the mole 10 months prior but thought nothing of it. However, when her mother expressed concern, she made an appointment at Carle Foundation Hospital right away.

The mole was removed July 11. Johnson had two stitches, and the doctors told her to come back in a week to remove the stitches and get the biopsy results. But when she returned to Carle, they informed her they sent her biopsy to the Mayo Clinic in Minnesota to rule out melanoma.

Johnson said the doctors ensured her it was probably nothing to worry about, but she had a bad feeling.

“I felt like if they sent it to another lab, then maybe something is wrong,” she said.

It was July 30 when Johnson received a call from Carle while working at the Prairie Center in Urbana.

“I don’t get off work until 8, and I knew if they were calling me that late, something had to be wrong,” Johnson said. “It was confirmed melanoma, and I just kind of blanked out. I couldn’t stop crying. I don’t know how I drove home.”

Johnson found out she had skin cancer the night before she was supposed to move out of her apartment on campus. She lives with her boyfriend Chris Alvarez, Class of 2013 University alumnus, and when she walked in, he was packing up their stuff.

After she told him, she had Alvarez call her parents to share the news.

“There can be few moments in your life that can be more devastating than when you are told that your child’s biopsy came back malignant,” said Ronnie Johnson, Johnson’s father. “It was shock.”

Johnson went to her first skin cancer consultation August 4. She met with a dermatologist and an oncologist and learned that her surgery to remove the melanoma would be in only two weeks, on August 14. It would be her first surgery.

“I was glad it was so soon because it didn’t give me enough time to process what was going on,” she said.

Johnson explained that the scariest part was not knowing how advanced the cancer was. She said she later learned it was Clark’s Stage 3, meaning the melanoma reached the inner layer of her skin.

In the weeks leading up to her surgery, Johnson said there were a lot of sleepless nights. But after the surgery was a success, she said she had the best sleep of her entire life.

The surgery lasted three hours, and the surgeon cut out layers of skin down to her muscle. When she woke up, she had over 35 stitches. She also had a sentinel lymph node biopsy, where they removed two lymph nodes from her groin area.

It took Johnson about a month to walk on her leg again. While she recovered, she passed the time by creating her family tree, which she traced back to 1790s Scotland on her mother’s side. As a history major, she said she hopes to work in genealogy, in a museum or historical society.

Alvarez said it was important for him to keep Johnson positive. He would tell her, “You’re going to beat the odds anyway.”

Johnson is now in remission with her melanoma at stage zero.

“That basically means I’m cancer free but my chances of getting it again are really high,” she explained.

Johnson sees the dermatologist every three months, who requires her to wear a sunscreen with a minimum of SPF 30, and visits the oncologist every six months. She said the experience has changed her lifestyle.

“My dermatologist said if you’re going to be out directly in sunlight, it’s not a good idea,” she said. “I love being outside.”

Johnson said it also has been difficult coming to terms with the scar on her leg.

“When I was younger I was always tall and had long legs, so the hardest thing for me was seeing this giant scar on my leg and realizing I was going to have to stare at this for the rest of my life,” she said.

Johnson said she was shocked when she learned she had skin cancer because there was no genetic link in her family. However, she said she often tanned outside without sunscreen and beginning at 16, she used tanning beds occasionally before high school dances. She stopped using tanning beds when she was 20.

“I don’t want to be that harsh and say, ‘No, you shouldn’t tan because I had skin cancer,’” she said, “But I do want people to know how common it is.”

According to the Skin Cancer Foundation, more people have had skin cancer than any cancers combined over the past three decades. In addition, when examining cases of skin cancer in people ages 18 to 29, 76 percent of the cases were attributed to using tanning beds.

“Just go see the dermatologist once a year; have them check your body,” she said. “If anything changes, get it checked out, get it removed, get a biopsy done on it. Just for your own peace of mind.”

Moving forward, Johnson said she hopes to raise skin cancer awareness. She recently contacted the Melanoma Research Foundation, which holds “Miles for Melanoma” 5K runs and walks to raise money for research. She said she would either run in one this summer in Chicago or try to organize her own in Champaign.

In addition, Johnson said she wants to bring positivity to others with skin cancer.

“I just try to give words of encouragement if I see it anywhere because I know how that feels,” she said. “It’s the worst feeling in the whole world to not know what stage it’s in and know if it’s curable.”

After she graduates in the fall, Johnson plans to move down to Florida, which she said is weird because of her experience with skin cancer. But she loves the beach and has to keep living her life, just with a few extra precautions.