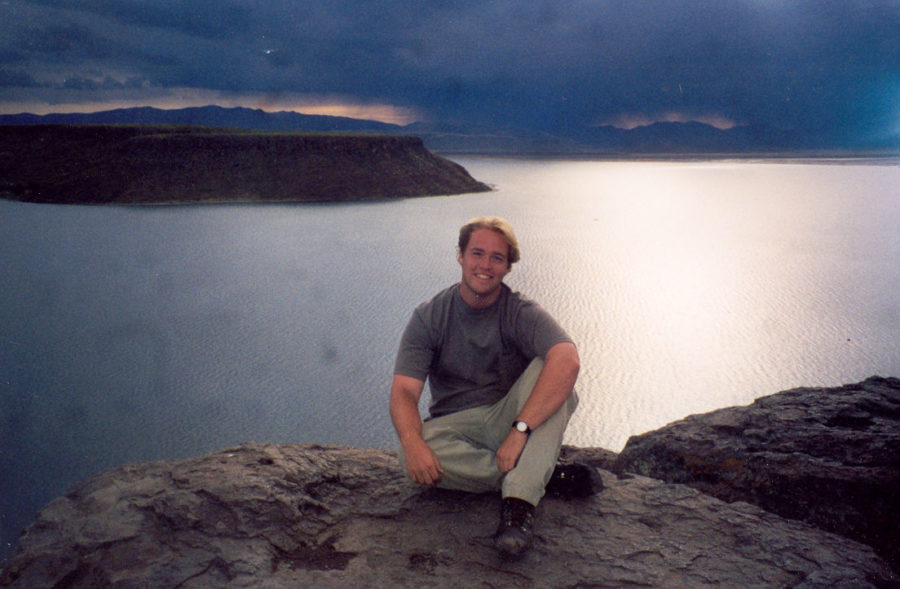 Mark Wolters in 1998 at the Bolivia-Peru border after studying abroad his first semester of senior year.

Mark Wolters is a visiting assistant professor of Business at the University and a 1999 University alumnus who earned a degree in business administration in marketing. Wolters met with The Daily Illini to talk about his four years here and to share some insight on both college and life after graduation.

The Daily Illini: What was different about the University then compared to now?

Mark Wolters: The technology. Now you have all of the slides online, whereas before you had to actually take down all the notes. You would have to go to Notes-n-Quotes and buy them from a previous semester, or there were people that would go to the class and take notes and sell them.

It’s a lot easier to get all of the information now than it was then, and there’s so much more help. Back then, the Internet was just coming out. You had to read the book or you were screwed. Now, if you want to learn more about something, you can go online. You have a choice — you can learn what the professor wants you to learn, or you can go way beyond it.

Also, Campustown has completely changed. Before, there were bars and a few fast food joints, whereas now there are high-rise apartment buildings.

It’s crazy how many apartments are up there and how much Green Street has changed. There used to be $5 T-shirts and get-your-poster stores and stuff like that, but now it looks kind of like a retail outlet in the south. Urban Outfitters next to Starbucks — it doesn’t really feel like a University anymore. It feels more like a strip mall.

DI: Who was your favorite professor, and why?

MW: Well, my marketing professor who got me into marketing, but also Professor Hatch.

He was a visiting professor and he did my business administration strategy course my senior year, and he was just phenomenal. He wore a bow tie to every single class — really good guy.

He was one of those professors who would take the time to talk to us like real people versus like you were some little kid. And that’s one thing I’ve used in my teaching.

I don’t look at the students like they’re just kids. These are tax-paying, adult clients and they could be my friends.

He showed us, “Look you can do these things, I believe in you, and if you’re not sure, come talk to me.” (It) kind of made me feel like someone cared about me at the University.

DI: What you were involved with on campus? What activities did you get the most out of, and why?

MW: I was a member of the Beta Theta Pi fraternity; we had a fun time there. I was in a couple other small organizations like American Marketing Association, but that was mainly for the resume-building.

That’s another thing I’ve noticed that’s different now — the RSOs now really help you. They’ll have guest speakers and people come and talk to you about things that are relevant. Now it’s like RSOs have a mission and they do all of this really cool stuff.

Back then, (RSOs) didn’t have so much. Back then you usually had your Greek house and maybe another little organization that you showed up once a month. Now I think people are much more involved — and that’s one thing I regret is not doing more in those organizations.

DI: Were there any especially memorable late-night cramming sessions, any “aha!” moments you had about your major or your career aspirations?

MW: I remember one was my freshman year, and it was for (Fred) Gottheil’s economics class, and I had studied all night. I had gone to one of the other halls in the six-pack to study, and someone pulled the fire alarm in my dorm, Hopkins Hall.

I saw all of them coming out, and I’m like, “Oh, that sucks to be them.” And then I was like, “OK, I guess it’s time for me to go back.” So once everyone goes back inside I went inside, too.

Everyone on my floor, we all had the same plan. We were going to wake each other up (for the exam), so I set my alarm, went to sleep. It was probably like three in the morning and it was an 8 a.m. exam.

The alarm didn’t wake me up. But the thing is, everyone was knocking on everyone else’s door and since they didn’t see me at the fire alarm, they’d figured I stayed someplace else. So my buddies didn’t knock on the door for me until they got back from the exam and knocked on the door saying, “Hey how’d the exam go?” and I’m like, “Huh, what?”

And so I remember sprinting to Foellinger.

DI: Were there any moments throughout college where you felt like giving up? How did you overcome them?

MW: There was one time during freshman or sophomore year. I was walking through the graduate library and I was debating with myself, “Do I go into education and become a teacher, or do I stay in the College of Business and get a business degree?”

It really came down to (wanting) to see the world, and I thought working in the business sector would give me a better chance to travel.

I remember just really having this really intense debate kind of by where the bronze tablets are. I was never a bronze tablet, but I remember that was the hallway I was in … and I just remember thinking, “No, I’m going to do the business one, and we’re going to do that.” And in the end it was great, because I ended up getting to teach business, which are the two things I love — teaching and business.

DI: What was your favorite college memory?

MW: Dads Weekend, because my dad always liked to have a good time.

He went to Illinois, as well, and so every time he’d come he’d talk about, “When I was in school we used to go to KAM’S and play bridge,” so he’d always be asking people, “Hey, do you guys play bridge at KAM’S?” I’m like, “Dad, I don’t think they know what bridge is.”

I still remember he was so excited; he was down (in Champaign), it was my freshman year and my brother was still here doing his master’s, so both of his boys were together and he was there.

U of I was supposed to be good that year, too, in football, so he was all pumped up. He’s got his buddies coming, he’s like, “Yeah!” And he fell off the front of the (Beta Theta Pi) house and into the bushes. But it was so funny. He fell off the front of the house but landed in a standing way in the bushes and then just like slid down and headed toward his buddy to tell him where to park.

My dad was always a fun time when he came.

DI: Is there anything you thought you knew in college but found out you really didn’t know after getting out into the real world?

That’s what I think drove me to teaching. I realize that there’s stuff I don’t know and I can learn from that. And I want to help other people so they can learn what they don’t know.

Also, my dad worked in business, so he gave me a lot of pointers beforehand. But one of the things that he stressed and I stress is that all of these people you go to school with right now, you’re probably going to meet them again in the working world. So don’t step on people, don’t treat them like garbage. Because you’re going to meet them on the way up and also on the way down, and you never know if they can help you or hurt you in any way.

So be good to everybody, because everybody is going to be doing something, and you might need their help. The networking that you can make at Illinois is so important.

DI: If you could give one piece of advice to graduating seniors that you wish you knew when you were graduating, what

MW: Do what makes you happy. Because at the end of the day, you’re the one that has to look in the mirror every day, and if you’re not happy with your work and your career, you’re going to be miserable.

So find a career that you’re happy with

and you’re happy to go to every day. If you

can have a job with that kind of passion, you’re not going to work.