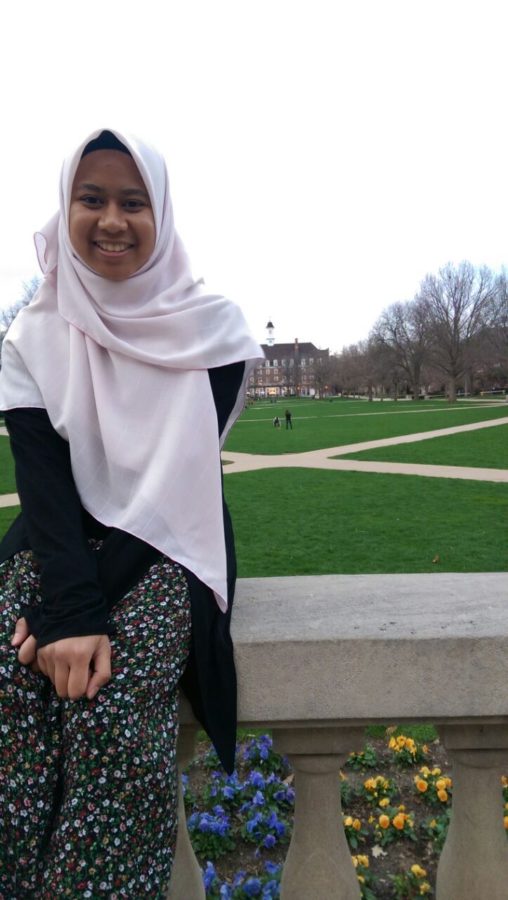 Fera Mohamad, senior in LAS, will be returning to her home country of Malaysia after graduating in May.

When Fera Mohamad, senior in LAS, arrived at the University in fall 2011, she was nervous, but excited for her freshman year. After living her entire life in Sepang, Malaysia, she was not sure what to expect in the U.S.

“All I knew about America is what I watched from the movies,” Mohamad said, citing visions of frat guys, sorority girls and all-day partying.

Now that Mohamad is graduating in May, she reflected on how studying in the U.S. has actually been a largely positive experience. She said she really enjoyed getting to learn about other cultures firsthand.

“I know the Internet has made everything easy, but it’s really different watching a YouTube video about American culture than just talking to someone and getting to know them,” she said.

Mohamad said she was able to make friends from many different countries and has learned about places outside of the U.S. through her education at the University.

“I think the best place to know the world’s culture is America,” Mohamad said.

Zichao “Albert” Wang will also graduate in May with a master of science in finance. Wang is from Tsingtao, China, and has spent the last three years studying in the U.S.

Wang said he appreciates the education he received here and has learned more about finance in the U.S. than he did in China.

Wang explained how difficult it is for international students to get a job here.

“The real situation is I don’t have a green card. So the investment banks in the United States rarely hire other countries’ people,” he said.

Wang said he has no interest in the few jobs that are available to international students in the U.S., such as auditing and working on tax returns.

He will instead live in Shanghai and work for one China’s top five investment banks.

Similarly, although Mohamad said she is glad she made the decision to study at the University, the bias against her Malaysian — and especially Muslim — identity makes going home seem more lucrative.

Mohamad said she always feels like an outsider in the U.S. because of how she looks and speaks.

“Sometimes, when I suggest something, people don’t take me seriously just because maybe I have an accent or I’m a Muslim,” she said. “But when I went back home for an internship, everyone took me seriously.”

Mohamad feels that her career could also advance further if she were to work in Malaysia.

“I hate to say that that’s prejudice, but it’s the truth,” she said.

Returning home, however, might also be a slight challenge in itself.

“I went back (to Malaysia) the past two summers, and I have this thing called reverse culture shock, (which) is basically when you go back to your old place and you have culture shock,” she said.

Mohamad explained reverse culture shock involves making small living adjustments in the place where one is from. She cited examples like relearning driving rules, navigating public transportation systems or readapting to certain climates.

In addition to these challenges, Mohamad said she would miss some of the simpler things about the campus, like the intellectual atmosphere of the library and the University’s social climate.

In fact, the social climate, Mohamad said, has changed her for the better by making her more comfortable talking to new people.

“(Before I came here,) I just didn’t find a need to put myself out there. I feel like America forces me to do that because I’m miles away from home and I don’t know anyone,” Mohamad said.

Wang said the biggest thing he took away from studying in the U.S. was the idea of living the American Dream.

“The freedom spirit, the idea of pursuing dreams,” he said. “What I learned most is that wherever you are, or what age you are, you can never stop pursuing your dream. This spirit is not in any other country.”