UPDATED: Wise resigns as chancellor, will earn $300,000 as professor in MCB 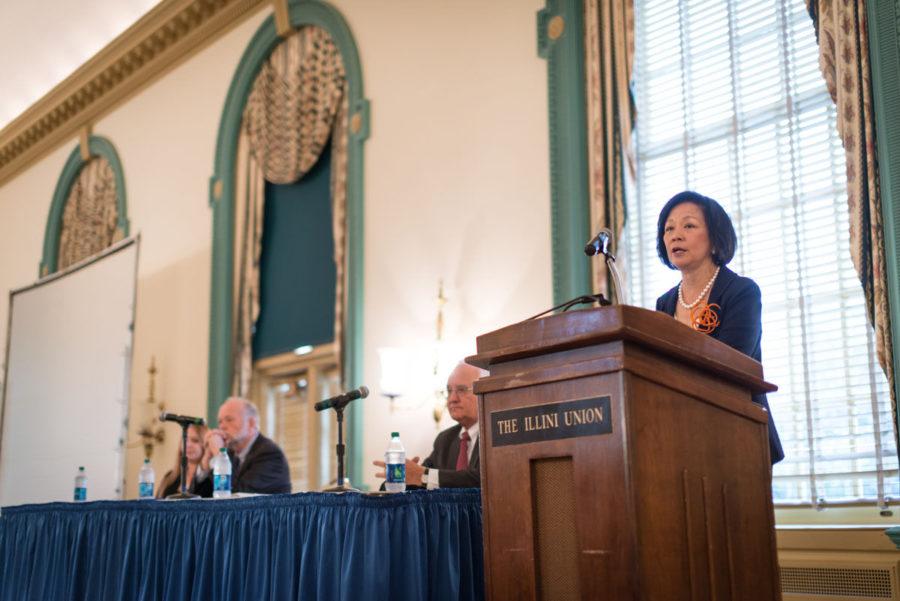 Chancellor Phyllis Wise speaks of the numerous awards and accolades the faculty of the University has received in the recent years at the Illini Union Ballroom on Oct. 13, 2014.

UPDATED (4:45 p.m. Friday) : The Daily Illini has learned that Chancellor Phyllis Wise will assume a professor position in the University’s Department of Molecular and Cellular Biology.

Wise is set to make a salary of approximately $300,000, matching the highest salary of a professor in the department, according to University spokesperson Tom Hardy. Wise previously received a salary of $549,069 as chancellor and vice president.

Wise will also receive $400,000, as a part of a “negotiated agreement with the University,” Hardy said. He said the $400,000 is essentially “the equivalent of the first four years of the retention incentive spelled out in (Wise’s) 2012 contract.” However, according to Wise’s contract, the $400,000 is contingent on three factors: leaving the office due to disability, death or as deemed by the Board of Trustees.

Phyllis Wise is stepping down as chancellor effective Aug. 12, the University announced in a statement Thursday.

Wise will return to a faculty role and stay with the University. To explain her departure, Wise cited “external issues” that have “diverted much-need attention and energy from our goals.”

University spokesperson Tom Hardy said University of Illinois President Timothy Killeen is considering both internal and external candidates to serve as the interim chancellor and has a few people in mind already. An interim chancellor will be named within the next week, Killeen said in a statement.

As for a permanent replacement, Hardy said a search will begin immediately but could take anywhere from six to nine months for a new chancellor to be named.

“I anticipate a smooth transition in leadership and dedicate myself to working closely with internal and external stakeholder groups—faculty, staff, students, alumni, donors and community leaders—during the process,” Killeen said in the press release.

“During the last four years, I have worked with an extraordinary team to realize our vision to be ‘the pre-eminent public research university with a land-grant mission and global impact,” Wise said in the press release. “We have accomplished a great deal.”

In the 2014-2015 school year alone, Wise faced controversies surrounding the employment of Steven Salaita, and accusations against the football, women’s basketball and soccer programs.

“(Killeen) is not wasting anytime,” Hardy said. “He wants to start the search as soon as possible.”

Hardy said Wise’s new position with the faculty has not yet been determined. She holds a bachelor’s degree in biology and a doctorate in zoology. She has served as the Urbana chancellor for almost four years, following a one year stint as interim president of the University of Washington.

Prior to her time at the University of Washington, she worked as a faculty member at UC-Davis, teaching Biology courses.

Hardy said he does not anticipate this affecting the start of the 2015-2016 school year, noting the University’s recent accomplishments, including the “record” incoming freshman class.

The Daily Illini would like to clarify that the updated information on the contingency of the $400,000 came to light several hours after the initial update was included in the story. We apologize for any confusion.