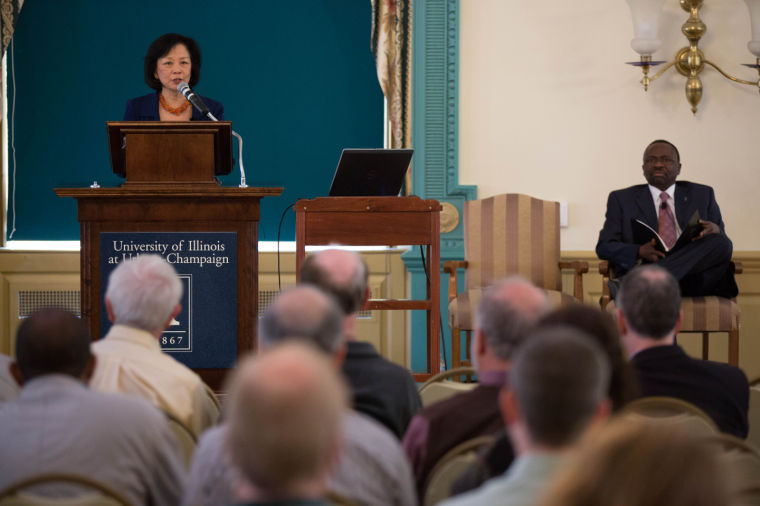 Chancellor Phyllis Wise speaks to the audience during a town hall meeting held at the Union, on Wednesday, April 9, 2014. Wise and Provost Ilesanmi Adesida were included in several documents of emails released Friday.

University officials were found using personal emails while conducting University business, and withheld the emails from several Freedom of Information Act requests, according to a news release.

This comes one day after Chancellor Phyllis Wise resigned from her position, effective Aug. 12.

Several top administrators used personal email addresses “to maintain confidentiality” when discussing controversial topics. Topics involved James Kilgore, a felon who was hired by the University in 2008, Steven Salaita, whose rejected appointment spurred academic freedom discussion across the nation and the Carle Illinois College of Medicine.

The administrators cited in the released documents included Wise, spokesperson Robin Kaler and Associate Chancellor Menah Pratt-Clarke, among many others.

The University became aware of the use of personal emails in April and began an ethics inquiry. What were subject to an estimated 10 Freedom of Information Act requests, the emails were released in documents reaching more than 1,000 pages Friday afternoon. The documents contained emails sent from both personal and University addresses, according to University spokesperson Tom Hardy.

“We are doing virtually nothing over our Illinois email addresses. I am even being careful with this email address and deleting after sending,” Wise wrote in an email, per the released documents.

The inquiry was conducted by Jones Day, an outside legal counsel, and reviewed 2014 and 2015 emails.

The University has previously noted that any emails containing business conducted over personal emails are subject by FOIA.

The emails released contained notes from Wise asking for emails to not be forwarded to others, and for all communication to be held via phone or personal email.

In July, when writing to Provost Ilesanmi Adesida regarding the upcoming lawsuit revolving Salaita, Wise wrote “this place is so messed up.” Adesida replied that he agreed.