Emails allude to tension behind College of Medicine's development 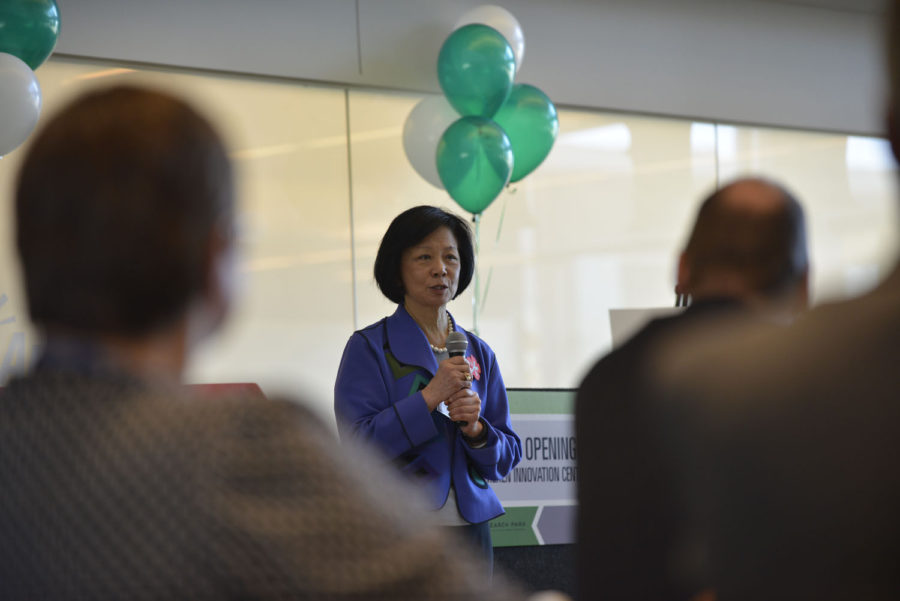 Soon-to-be-former University Chancellor Phyllis Wise is at the center of emails released Friday by the University detailing tensions between Wise and former Board of Trustees Chairman Christopher Kennedy.

The University’s “FOIA-everything atmosphere,” as soon-to-be former Chancellor Phyllis Wise once described it in an email, has prompted the release of 773 pages of emails regarding the Carle-Illinois College of Medicine.

On Friday, the University released a statement explaining that some University administrators and faculty members used personal emails to discuss University matters, including issues about the College of Medicine as well as Steven Salaita and James Kilgore.

According to the statement, the University became aware that emails sent through personal accounts were not included in Freedom of Information Act requests filed within the past year. The University released the emails, more than 1,100 pages, Friday morning; less than 24 hours after Wise announced her resignation.

The bulk of the emails are between key players in the College of Medicine proposal and eventual approval.

The first email in the set details a dinner between Wise and two unnamed couples, who appear to be University alumni. In the email, which was sent on Nov. 29, 2014, Wise said she explained the plans for a proposed College of Medicine and garnered the couples’ support. The dinner guests also agreed to host dinner parties to gather more support and awareness for the new college.

Other emails detail underlying tensions between University administrators and former Chairman of the Board Chris Kennedy, along with Chicago campus leaders.

In one email Wise tells Rick Stephens, a member of the Research Park Board of Managers, “I have the quiet support of UIC leadership, but they will never say this out loud.” Members of the Chicago Academic Senate later published a rebuttal to the proposed college.

Another email, from Adesida, states, “UIC sees anything that helps us down here as threatening to their advancement.”

In addition to disputes with Chicago campus leaders, Wise also writes about a clear lack of support from Kennedy, who was not clued in on the proposal until nearly a year after the emails began.

Wise stated Kennedy initially said he wanted to be “super supportive” but met her proposal with mostly negative feedback.

Wise said Kennedy was upset that the plan was shared with other people before members of the Board. He also told Wise that speaking with Board members individually was “the worst kind of governance.”

In order to gain support for the proposal, Wise shared her vision with McMillian, Koritz, and Trustees Pam Strobel and Tim Fitzgerald. Wise said Kennedy also asserted that he did not see how the proposal presented at that time could fit into the University’s long term plan.

Emails between Wise and Stephens also clarify Kennedy’s alignment with Chicago politics and Mayor Rahm Emanuel. According to Wise, Kennedy said Emanuel wanted an engineering-based college of medicine in Chicago, if not at the University’s Chicago campus, then at Northwestern University.

Stephens replied that Emanuel is good friends with Kennedy, as well as President Barack Obama, and “Chicago is high on his list too.”

In an email to Kaler, regarding the same meeting, Wise said she was disappointed that Kennedy focused on the politics more than the potential, but not discouraged.

“Chris does not know me well enough to know when someone tells me I can’t do something” it only makes me work harder to prove them wrong,” Wise wrote.

Wise did work harder and through the help of other administrators and Umbach, founder and president of Umbach Tripp, a consulting and research firm in Philadelphia.

Umbach Tripp created the initial report on the prospects of the College of Medicine and often advised Wise on how to handle questions and backlash or when to release certain information. During their correspondence in July 2014, Wise reminded Umbach not to use University email address in an email with the subject title, “Be careful.”

“You may not be used to the ‘FOIA everything’ atmosphere that we are working in at Illinois,” she wrote. “One person who is clearly crazy and doesn’t have work to do sent 60+ FOIAs in one day!”

Wise added that she did not want Christophe Pierre, vice president for academic affairs, to be entangled in any wrongdoing by being included in the email.

“(Pierre) is the one person in the University Administration who is thoughtful, intelligent and has the highest of ethics,” she said.

In March 2014, Umbach advised Wise to “hide-out” for a while after the report on the proposal was released.

He also explained to Wise that he would prefer to email Kennedy himself, rather than wait for contact, because he did not trust that Kennedy would reach out to him. In his emails, Umbach implied that he had a bad experience working with Kennedy previously.

“He gains very little from talking to someone at my ‘level,’” he wrote.

In the same email, Umbach wrote that his consultation would cost approximately $180,000 dollars, give or take. He told Wise the bill would be split equally between “you” and Carle. It is unclear, however, if Wise paid for the consultation herself or through University funds.

In addition to her work with Umbach Tripp, Wise also consulted Burbules and Tolliver. Both are members of the Senate Executive Committee and were included in the plans to offer help on the governance of the college and language of the documents regarding the proposal.

Burbules, however, also helped Wise gain support for the college. On May 5, 2014, Wise emailed Burbules stating that she was just informed Kennedy would be meeting with Larry Schook, vice president for research, and Don Chambers, professor in biology.

“Anything that you can do to influence what Don says is much appreciated,” Wise stated.

Following Burbules’ confirmation that he talked to Chambers about the issues and hoped for his support Wise wrote she hoped Kennedy would listen to some of Burbules’ thoughts, given how much the former chairman respected him.

However, only two months later, in July 2014, Wise sent an email to Adesida with the subject title, “Mischief of Don Chambers.”

In the email, Wise stated that Woodard had told her Chambers thought Wise was evil. The two discussed a pinning the Urbana faculty against Chicago and preparing them to “get in the ring.”

“I never thought it would get this ugly,” Wise concluded.

Although Woodard does not appear in many of the emails concerning the proposal plans for the College of Medicine, she is often responsible for introducing Wise to consultants or arranging meetings with Illinois politicians, such as Dick Durbin.

Woodard also introduced Wise to Ellen Babbitt, a fellow Northwestern University law school alumna. Babbitt is an attorney with Franczek Radelet, an employment benefits and labor law firm. Franczek Radelet has worked with the University on several situations, including an ongoing investigation into accusations from former players of the women’s basketball team and football team.