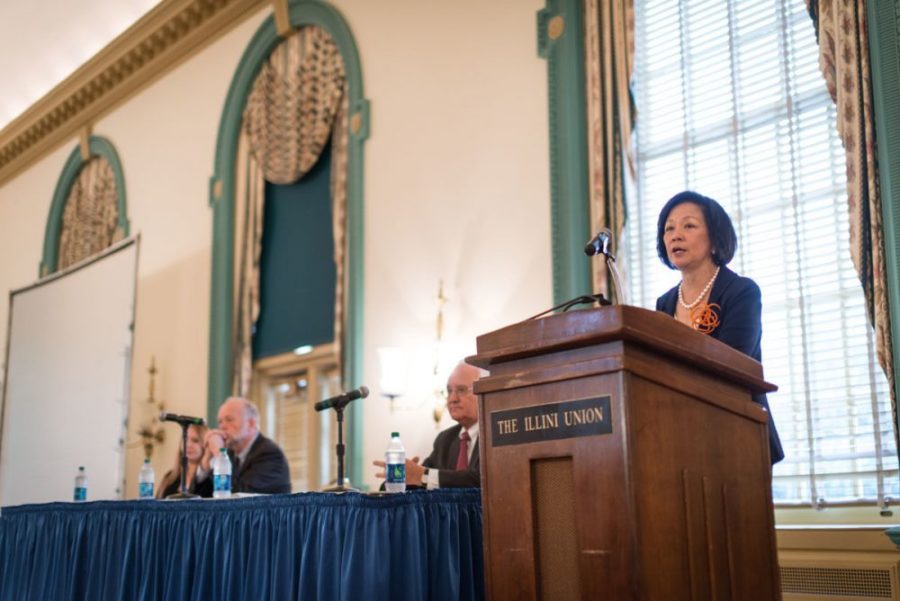 Former Chancellor Phyllis Wise speaks of the numerous awards and accolades the faculty of the University has received in the recent years at the Illini Union Ballroom on Oct. 13.

Phyllis Wise announced her resignation in early August after a year of controversy and public scrutiny. View a timeline of the events that followed.After an arguably tenuous 2014-2015 academic year and summer, the University will start the fall semester with remnants of yet another controversy still fresh on the minds of members of the University community.

However, Nicholas Burbules, educational policy professor and SEC member, whose emails appeared in the release, said there has been significant misinformation surrounding the developing story concerning emails and FOIA requests.

“There is no state law or University rule against maintaining a personal email account and using it to communicate with people; there is nothing against state law or University policy against maintaining separate accounts,” Burbules said. “There has been a lot of spinning out there that somehow there’s something murky about using a personal email.”

Burbules said neither he nor fellow SEC member Joyce Tolliver, associate professor in spanish, who was also frequently mentioned in the emails, have ever avoided releasing information relevant to a FOIA request; including instances where requested information was discussed on a personal email account.

“We’ve always been instructed at the University — whether it’s your University account or some other account — it is still public record,” Tolliver said. “We’ve always acted under the assumption that there really is no difference at all.”

Tolliver also rejected the notion that University administrators felt they had anything to hide from FOIA inquiries. She said she does not have any evidence of administrators trying to avoid turning over material after a FOIA request.

“If it did happen, I was never informed of it and I have never seen any public evidence of that,” Tolliver said.

Kim Graber, the executive vice chair of the academic senate, said that rather than hiding information, administrators might not have known the material was subject to the FOIA law because it came from personal email accounts.

However, John Wilson, co-editor of the American Association of University Professors blog, Academe, disagreed. He said the University officials involved were well aware of what they were doing.

“I don’t think there’s any doubt that it was to avoid FOIA and conceal evidence from the public,” Wilson said. “It’s pretty clear — [Wise] said in her emails, ‘I’m doing this to avoid FOIA,’ and not just her, but everybody in the administration was avoiding FOIA by trying to use their personal email accounts.”

The emails in question covered Steven Salaita, James Kilgore and the Carle-Illinois College of Medicine. In the emails Burbules, Tolliver, Campus Spokesperson Robin Kaler and external consultants advised Wise on how to handle these, at times, controversial situations.

“I stand by what I said, the positions I said and the advice I gave,” Burbules said. “It was my best thinking at the time.”

Burbules said he does not take issue with criticisms on the advice he gave Wise, but rather the notion that he does not have the right to give that advice.

“There’s a big difference between saying, ‘I vehemently disagree with the advice they were giving,’ and saying, ‘There’s something wrong with giving that advice,’” Burbules said. “I and Joyce (Tolliver) have given a lot of advice to a lot of chancellors and provosts over many years.”

The emails were released on Aug. 7, just one day after Wise announced her resignation from her position as chancellor.

Graber said she does not know if the release of the emails prompted Wise’s resignation, or if more resignations are to follow.

Wilson said although Wise’s actions were completely unethical, not much could be done to punish her due to her contract as a tenured professor.

“She won’t get the $400,000 bonus she wanted and she doesn’t have her chancellor salary, but she has that very well paid faculty position,” Wilson said.

Wise, who previously made almost $550,000 as chancellor, will make $300,000 as a professor in molecular and cellular biology.

Tolliver said she felt it was not worthwhile to speculate about Wise’s motivations for resignation. If evidence shows more administrators violated the FOIA law, she said there could possibly be more resignations or even dismissals.

“Everyone makes mistakes; I’ve made mistakes, you’ve made mistakes,” Burbules said. “Whether a mistake or a misjudgment rises to the level that a person deserves to be fired or punished for is, I think, something we need to have conversations about.”

Burbules, who said he fully supports the FOIA law, also said he felt some of the materials included in the release went too far and were not of public concern.

For example, some of the emails released showed personal correspondence, or “love notes,” as Burbules called them, between Tolliver and her husband.

“There is this notion that anything you put in any email is FOIA-able, but that’s not what the FOIA law says,” Burbules said. “Some things included in this release are not FOIA materials. I was shocked at some of the things that were included there.”

Kaler said the University is taking steps to reinforce its commitment to transparency and integrity. She said they are adding specific language concerning personal emails in instructions to employees regarding FOIA requests, conducting additional training around FOIA and requiring University leaders to confirm, on an annual basis, their compliance with FOIA laws.

Graber also said there needs to be more specific guidelines created so everyone knows what is expected in relation to FOIA requests and emails.

“These types of events damage campus for a considerable amount of time. What saddens me is that it seems like there is always such a strong suspicion about anyone serving in an administrative capacity,” Graber said. “There is an intense desire by some in the public to look for anything that might be considered scandalous.”

Burbules said the issue goes beyond the FOIA requests. He believes the situations mentioned in the emails, specifically regarding Steven Salaita, are indicative of larger changes that need to take place in University policy.

“Lots of these issues were looked at by the Senate last year. All of us understood that something went wrong in this process. There were a lot of breakdowns,” he said. “There were mistakes at every level of the process that led to this terrible, unwinnable situation [Wise] faced. None of us want to go through something like this again.”

Wilson said he also believes University policy needs to change post-Salaita. However, he said it is hard for him to feel bad about what happened to Wise.

“The worst case scenario is she has a tenured position that Steven Salaita wanted at more than three times the salary he was going to get,” Wilson said. “It’s hard to see someone as a victim when she was responsible for what happened to Salaita, and her golden parachute is much more lucrative than something he could ever dream of getting.”

Despite the recent scandals, Burbules said he believes the University will recover because the events aren’t a representation of the school’s principles and values.

Tolliver agreed that the longstanding reputation of the University would not be marred by scandal.

“I think the reputation of this institution is very strong, in terms of scholarship and quality of students, strong students continue to apply for admission,” she said. “I haven’t seen any indication that students or scholars have any reason to stay away from the University of Illinois.”

Phyllis Wise announced her resignation in early August after a year of controversy and public scrutiny. View a timeline of the events that followed.