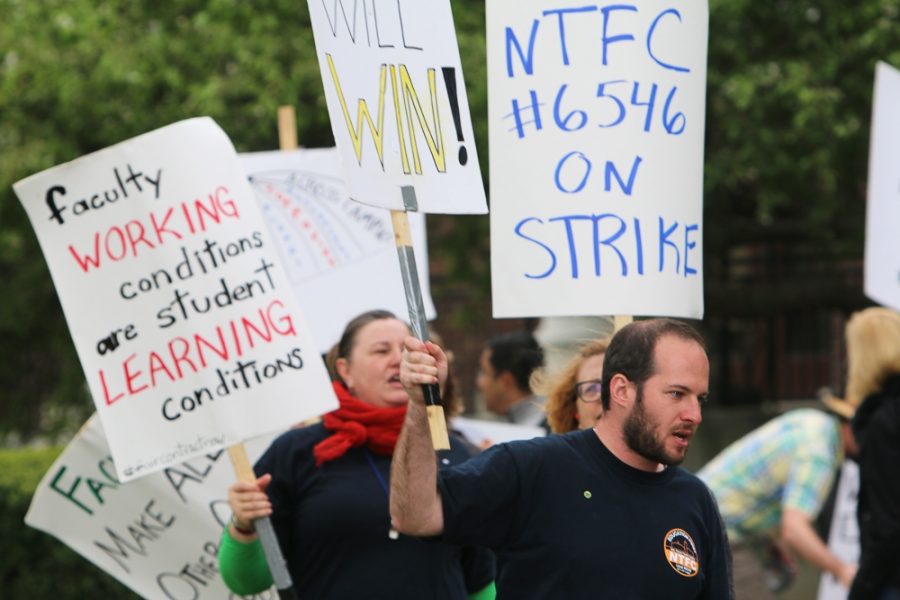 By Megan Jones and Vivienne Henning
May 2, 2016

Classes will resume as normal for the final three days of classes this semester. The Non-Tenure Faculty Coalition Local 6546 voted Sunday evening to end the strike and return to work as normal.

University administration and the NTFC released a joint statement Saturday evening, stating a tentative five-year contract was agreed upon.

This is the first contract for the union after three rounds of labor actions and the union will hold a vote to ratify and accept the contract on Thursday, May 5.

“The [NTFC] and Interim Chancellor Barbara Wilson and Interim Provost Edward Feser are pleased to announce that we have reached a tentative agreement for a five-year contract for specialized faculty members. Everyone involved appreciates the hard work and partnership that went into reaching this important step in the process,” the statement said.

History professor and NTFC Communications Chair, Dorothee Schneider, sent out a statement on behalf of the NTFC about the possible agreement.

In the statement, Interim Chancellor Barbara Wilson and Interim Provost Edward Feser said, “We would not achieve our mission as a leading public research university without the excellent work and dedication of our specialized faculty. We are a stronger institution when they are integral partners in governance, when their teaching is protected by academic freedom, and when they have appropriate predictability and stability in their appointments.”

Feser also said that the agreement encompasses the above priorities without replacing the departments and colleges as overseers of the hiring and promotion aspects of the University’s academic programs.

The agreement will maintain the academic units’ flexibility with multi-year contract offers in regards to the units’ own needs and financial capacity, Feser said.

Also in the statement, Interim Chancellor Barbara Wilson said, “We greatly value the contributions of our specialized faculty, and we appreciate that negotiators for the union remained at the bargaining table with us to find common ground that achieves our shared goals.”