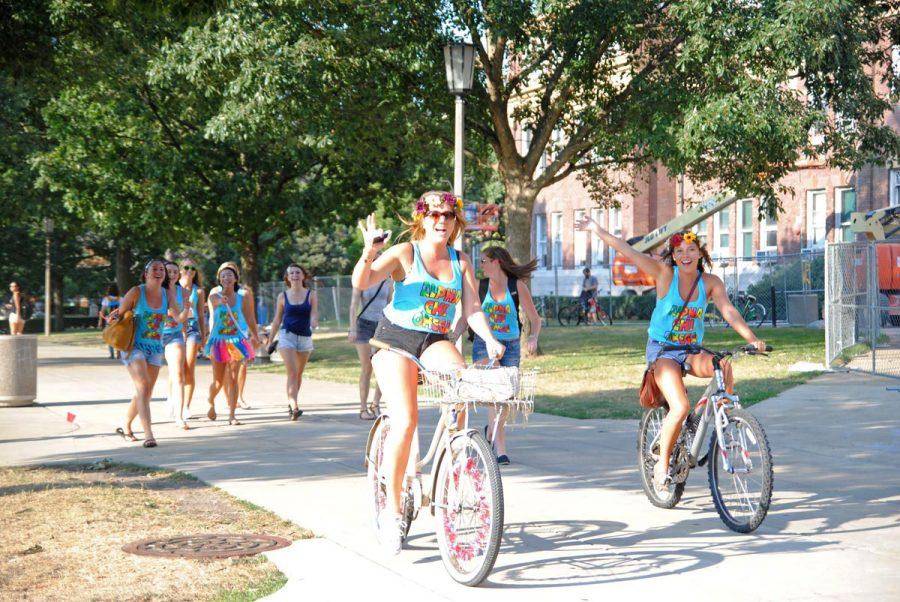 Alpha Chi Omega sorority members arrive on the Quad to welcome the 2013 pledge class. The 2016 pledge class will begin recruitment this upcoming weekend.

As many underclassmen prepare to rush, freshmen women will spend $55 out of their pocket while no fee is required for men partaking in informal recruitment.

Sororities in the Panhellenic Council require Potential New Members, PNMs, to pay a fee in order to fund different aspects of the formal, six-day recruitment program. Meanwhile, fraternities in the Interfraternity Council, or the IFC, fund informal recruitment through individual chapter’s budgets.

Mike O’Neill, senior in broadcast journalism and former Illini Media employee, is well aware of Greek life’s popularity. He is both a member of Phi Kappa Psi and serves as the Vice President of Recruitment in IFC.

On campus, 25 percent of students are in either a sorority or fraternity, O’Neill said. Ten percent consist of 1,500 men in fraternities. There are more fraternities than sororities on campus, 47 compared to 23.

Additionally, 3,500 male freshmen enter the University every year, and around 50 percent of them end up rushing.

Despite the high number of potential new members every year, the IFC does not have a Formal Recruitment. This is the main difference between sorority and fraternity recruitment.

“We’re giving each chapter the freedom to set themselves apart, but we’re making sure recruitment events are being held in a respectable manner,” said O’Neill.

Fraternity recruitment events often face criticism following instances of parties with alcohol and underage students during “dry rush,” a time where the Fraternity and Sorority Affairs mandate a social alcohol ban at the beginning of the semester.

These bylaws are something that O’Neill said the Interfraternity Council takes seriously.

“Our biggest job is to minimize risk…It’s not that it’s out of our control. It’s up to us to encourage that not to happen,” O’Neill said.

Phi Kappa Tau, a new fraternity chapter on campus, is experiencing both the pros and cons of having informal recruitment firsthand.

“One of the toughest parts is that we do not have a definite reputation,” said Brody Ryan, recruitment chair of Phi Kappa Tau. “There are only a small number of people who know we are back on campus, and even then, people do not have a clear understanding of who we are.”

Ryan said not having a preexisting reputation allows their chapter the opportunity to establish one by publicizing the fraternity through philanthropy and community service.

While freshmen men undergo informal recruitment, about 1,200 to 1,400 women hoping to rush must follow a more structured process.

Formal recruitment, which women participate in, is a six-day program, where the women go from house to house, attend interviews and await their bids.

In an email, Elaine Eggert, vice president of public relations on the Panhellenic Council, wrote that the six-day formal recruitment program involves thousands of students and costs a good deal of money.

“Nebraska is the high and they charge $100,” Eggert said. “Most of the large southern schools with large greek communities are over $100. University of Alabama charges $150 at minimum.”

While the fee for Formal Recruitment is $55, there is no reimbursement if one isn’t accepted into a sorority.

Both sorority and fraternity recruitment have had these separate structures for decades, and despite some criticism, neither appear to have any changes in mind.