Crittenden to face her old school when Illinois takes on Oregon 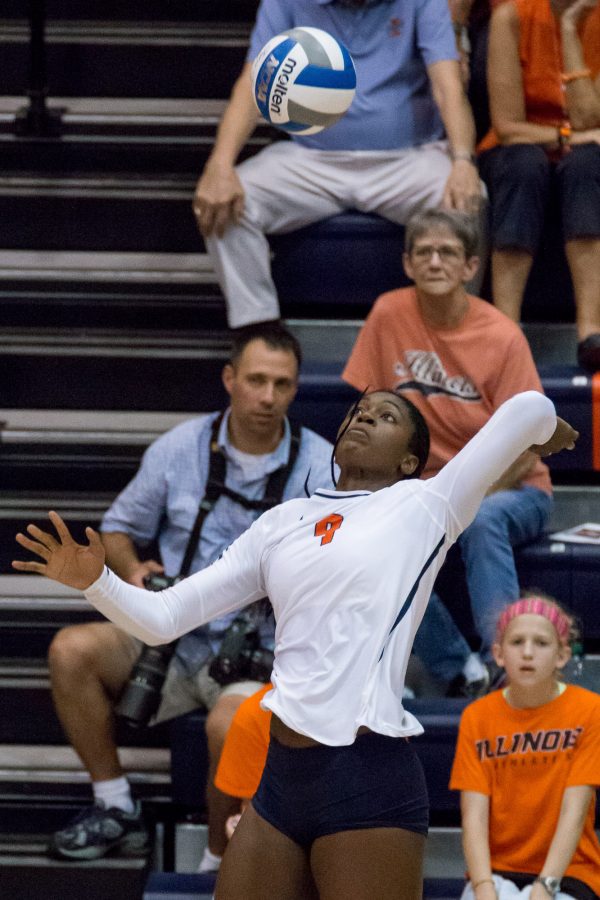 Illinois opposite hitter Naya Crittenden gets ready to spike the ball during the match against Arkansas at Huff Hall on August 26. The Illini won 3-0.

Opposite hitter Naya Crittenden’s collegiate volleyball career is coming to a close, but it’s a career that did not start in Champaign, Illinois.

It began over 2,000 miles away in Eugene, Oregon, with the Oregon Ducks, and on Friday she will face her old school for the first time in her career.

“I don’t really have any thoughts on (playing Oregon),” Crittenden said. “I think of it as another business trip for us. Personally, (I haven’t thought about it) too much. Obviously, I want to kill them. I want to beat them. But it’s not something where I’m wanting it to be all about me.”

Head coach Kevin Hambly acknowledged that Crittenden might have some personal feelings towards Oregon.

“She needs to make sure that it’s not a personal thing, that it’s more of an Illinois thing,” Hambly said. “It’s Illinois versus Oregon. Not Naya against Oregon. She can’t be selfish in this. That’s going to be Naya’s biggest challenge going back.”

Hambly said that Crittenden was on his radar before she graduated from Peter Johansen High School in Modesto, California, but was unable to get very far in the recruitment process because she just wasn’t interested.

Illinois’s head coach went on to say that the Midwest isn’t a very appealing place to most teenagers who are deciding where they want to spend their next four years. He doesn’t blame any recruits for overlooking his program, and as a California native himself, he added that he probably wouldn’t have wanted to play in Illinois either.

“But I think when they come, and see what (Illinois) is, after you understand what the college atmosphere and environment is about and how cool it is to be at a big school like this, I think (our two California players) are really happy,” Hambly said.

Middle blocker Ali Bastianelli has been a bastion of the Illinois defense all season, including a record-setting performance Saturday against Stanford.

She also exhibited a new role as a major contributor to the Illini offense in Sunday’s match against Colorado.

Bastianelli took 21 swings against Colorado, more than she had in any other game, contributing 10 kills.

“We needed her (against Colorado) because we were struggling to score from other places, and I think that was great for us,” Hambly said. “We’ve wanted her to get more involved, but she doesn’t know how to get into that offensive mindset. This was the first time I really saw her in that mindset in the six years I’ve known her as a volleyball player.”

Bastianelli seemed to concur with her coach about getting more involved and was glad that they were on the same page.

Bastianelli is ready to embrace a bigger role on offense for the Illini, and a large part of the confidence she has in herself comes from her connection with setter Jordyn Poulter.

“I think last season I struggled connecting with Jordyn a lot,” Bastianelli said. “We didn’t really have a good connection until the end of the season. But that’s something that has carried over into this season. We have a really good connection, and it really showed in the Colorado game.”

Bastianelli had a standout weekend for the Illini — she set a record for most block assists in a match with 14. While the team wasn’t able to come away with positive results, Bastianelli thought the games suited her play.

“I actually really like when the game is tight, even if we’re down,” she said. “It makes me play better. I’ve always liked playing close games against good teams because they remind me that I always have to be at my best.”