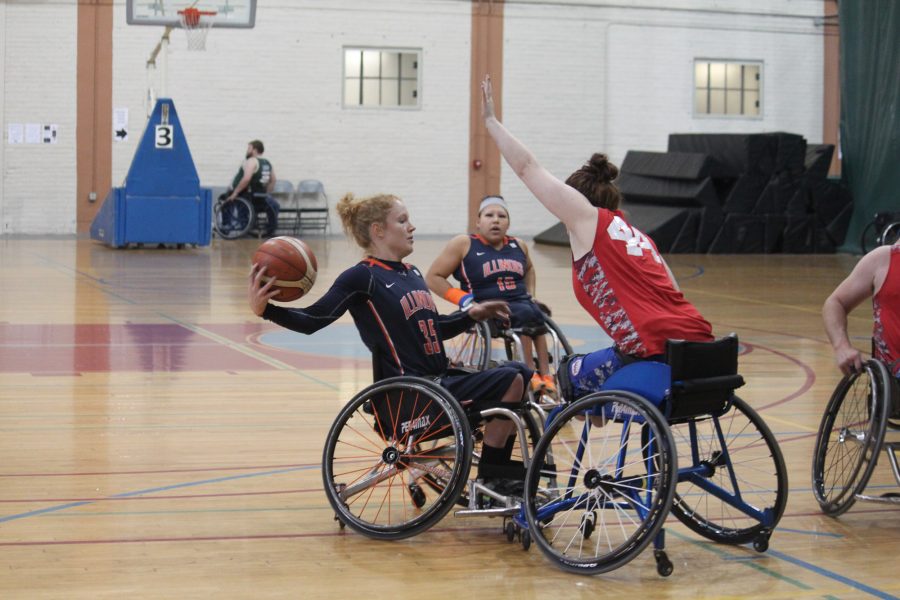 Grad student and captain Shelby Gruss looks to pass over threw the hands of the Mary Free Bed Rollin Drive defenders. Rollin Drive went on to defeat the Illinois women’s wheelchair basketball team in the first round of the 2nd City Showdown’s tournament in Chicago from Nov. 12-13.

The “weekend of discovery” for the Illinois women’s wheelchair basketball team is over.

Behind a new trio of leaders, Illinois defeated the Milwaukee Bucks’ wheelchair basketball team to finish third at the eighth annual Second City Showdown at the Broadway Armory Park in Chicago. The tournament consisted of three pool play games Saturday and a tournament with four opponents the next day.

It was the team’s first tournament with Shelby Gruss, Kaitlyn Eaton and Christina Young at the helm. They are filling the gaps of big Kendra Zeman and 2016 Paralympic gold medalists Megan Blunk and Gail Gaeng.

“In the past couple of years, (Gruss, Eaton and Young) have been able to sit back and listen to their other teammates,” head coach Stephanie Wheeler said. “I think for them, what they’re seeing is that it’s exhausting leading.”

With only eight players on the team, the new leaders played a majority of the minutes over the weekend. Of the three, Eaton made the most immediate impact with her quick hands on defense, passing and sharp shooting. She tied for a team-high eight points in Illinois’ loss in the first round of the tournament to the co-ed Mary Free Bed Rollin Drive team.

Eaton’s passing also led to several open buckets for her teammates, including one of her main targets, freshman Erica Wilson.

In her college debut, Wilson started every game for the Illini, and she was not afraid to shoot. Though she had her fair share of misses, including the game-winner at the buzzer against Rollin Drive, Wilson kept finding gaps in the defense for mid-range jumpers. She tied with Eaton at eight points against Rollin Drive.

“I need to take my perfect shot every time I shoot,” Wilson said. “I did that a lot more today.”

Wilson on both ends of the court could also consistently be found battling with bigger professional male wheelchair basketball players in the paint.

Wilson, who played center every game, is also one of the tallest players on the undersized Illinois team.

Height can be a big advantage in wheelchair basketball. If players tower over their competitors, they can easily hold the ball above the outstretched arms of their defenders.

“I’m not very big, so learning how to push them outside (of the paint) so they don’t get in the paint initially is something I need to improve on,” Wilson said. “Height is a great thing to have, and I wish I had a bit more of it.”

The Illini will head to Wisconsin-Whitewater later this week for a five-game circuit on Friday and Saturday.

“It’s going to be a fun season to see how much we grow in our character skills and how far that takes us,” Wheeler said.