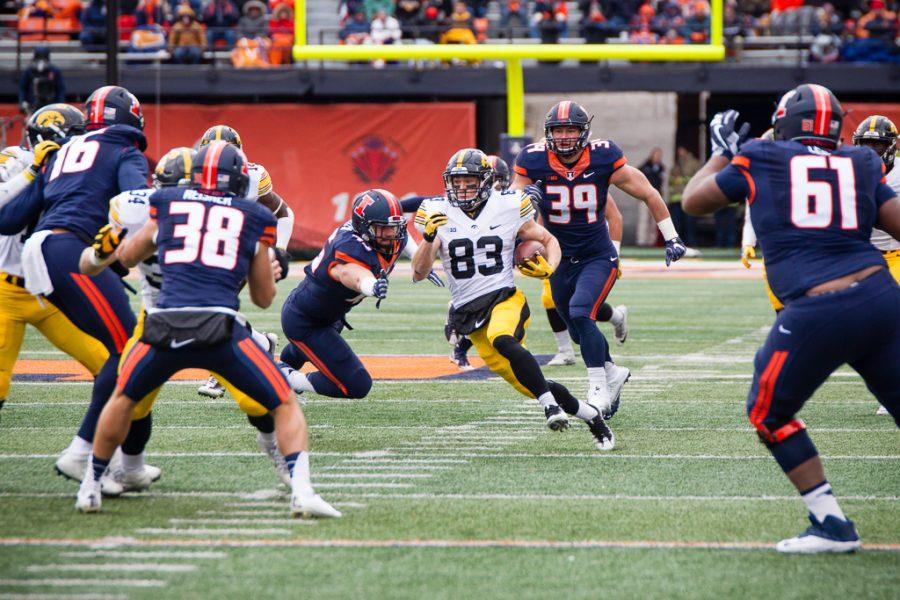 Iowa’s Riley McCarron (83) returns a punt for a touchdown during the first half of the game against Iowa at Memorial Stadium on Saturday, November 19. The Illini are losing 7-0 at halftime.

After a slow start from both teams, Iowa spoiled senior day at Memorial Stadium with a 28-0 win over Illinois.

Senior Wes Lunt started his first game since Oct. 8. He had trouble connecting with his receivers all day, completing 19 passes on 41 attempts for 137 yards.

“They are just a well disciplined team,” Lunt said. “We didn’t take advantage of the opportunities we were given.”

The only receiver he found consistently was senior Zach Grant. Grant caught eight passes for 65 yards – both were team highs.

The running game couldn’t get moving either. Kendrick Foster led the team with 50 yards on 16 carries, but the Illini rushed for 61 total yards on the day against a stingy Iowa defensive line.

“The defensive backs were plugging well, and they were fundamentally sound to a tee,” Foster said. “They played better than us today. Our defense did a heck of a job, but we just didn’t step up as a offense. It is frustrating, not getting over 100 yards rushing as a team.”

At the beginning of the game, neither team could find any momentum. Iowa didn’t pick up a first down until there was about a minute left in the opening quarter. The Illini picked up three first downs in the quarter, but could never string any together. By the end of the first, both teams had punted a combined seven times.

Iowa finally broke the tie with a 55-yard punt return touchdown from Riley McCarron. The special team’s error undermined a solid defensive showing by the Illini in the first half.

“It is definitely tough to swallow when early on we were suffocating them and we were doing what we needed to do,” linebacker Tre Watson said. “And to let opportunities slip through our hands, especially at the end, it hurts.”

In the second half, the Hawkeyes finally found the holes in the Illinois defense, and scored a touchdown on a one-yard run from running back LeShun Daniels Jr.

Daniels led the way for the Iowa offense all game. Since the beginning of the second half the Illini defense could not contain him. He ran for 159 yards on 26 carries, and two touchdowns.

The real back breaker came in the middle of the fourth quarter. The Illini were hanging onto their last hope as the Hawkeyes held a two-score lead, but Daniels broke off a 50 -yard touchdown run to put them out of reach.

The loss officially knocked the Illini out of contention for a bowl game.