Illinois wheelchair basketball teams look out for rubber in Whitewater 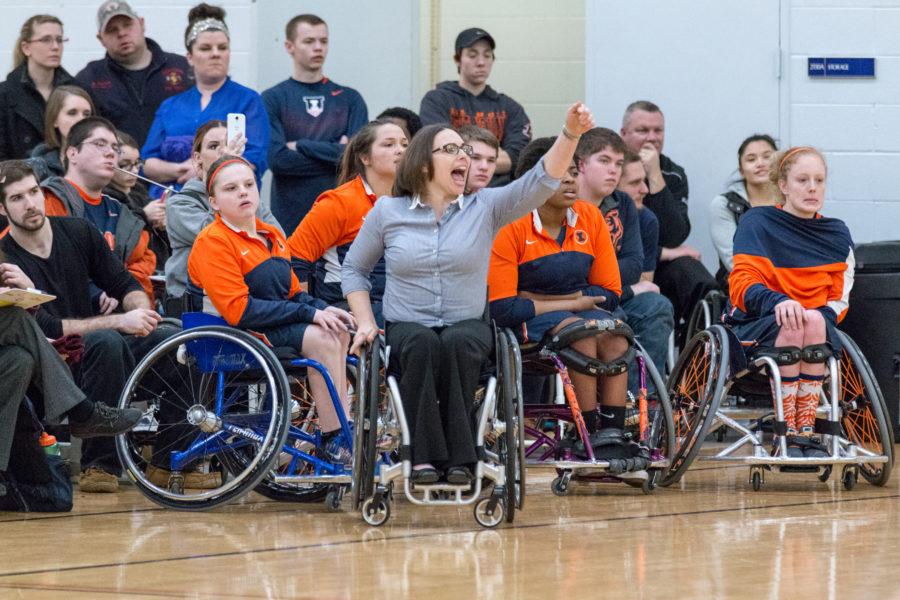 Illinois head coach Stephanie Wheeler shouts instructions to her team during the game against Alabama at the Activities and Recreation Center on Feb. 12. Wheeler’s team just won gold at the 2016 Paralympics in Rio.

The hoop can be a problematic thing in basketball. But in wheelchair basketball, so can the court.

The courts became a factor in the Illinois wheelchair basketball teams’ games over the weekend at the University of Wisconsin-Whitewater.

The team competed in a series of games on the basketball courts in Whitewater’s Kachel Fieldhouse in its recreation center Friday and Saturday. The courts are a laid rubberized surface, which is different from the hardwood basketball courts that the Illinois wheelchair basketball teams mainly practice on at the ARC.

The rubber was brought up in the players’ tires and consequently onto their hands. The ball, too, would collect rubber, and passes would cause the residual material to spread to another person.

“The rubber came back (at me),” Illinois women’s wheelchair basketball player Christina Young said. “I got some rubber in my eye. (I) couldn’t see for a little bit.”

The floor, called the Taraflex Sport M Performance, is designed for multiple sports, including basketball, tennis, track and field, and volleyball.

Gary Harms, the director of recreation sports and facilities at Whitewater, said the courts in the Kachel Fieldhouse are also spike-resistant to accommodate for NCAA Track meets held in the facility.

Illinois men’s wheelchair basketball coach Matt Buchi said that means more effort for a wheelchair user when pushing . It is also not as easy to glide on.

“It slows us down a little bit,” Heslop said.

Even then, Buchi said the consistency doesn’t make that much of a difference.

“It’s something that we can’t really control,” Wheeler said. “We should not be thinking about it. … We should be focused on our skill execution.”

Young has competed on the Whitewater courts multiple times in her wheelchair basketball career with Illinois. She said the courts have improved over the years, but there is still a noticeable difference between rubber and hardwood.

“You just got to forget about it and keep pushing,” Young said. “Forget about the pain.”