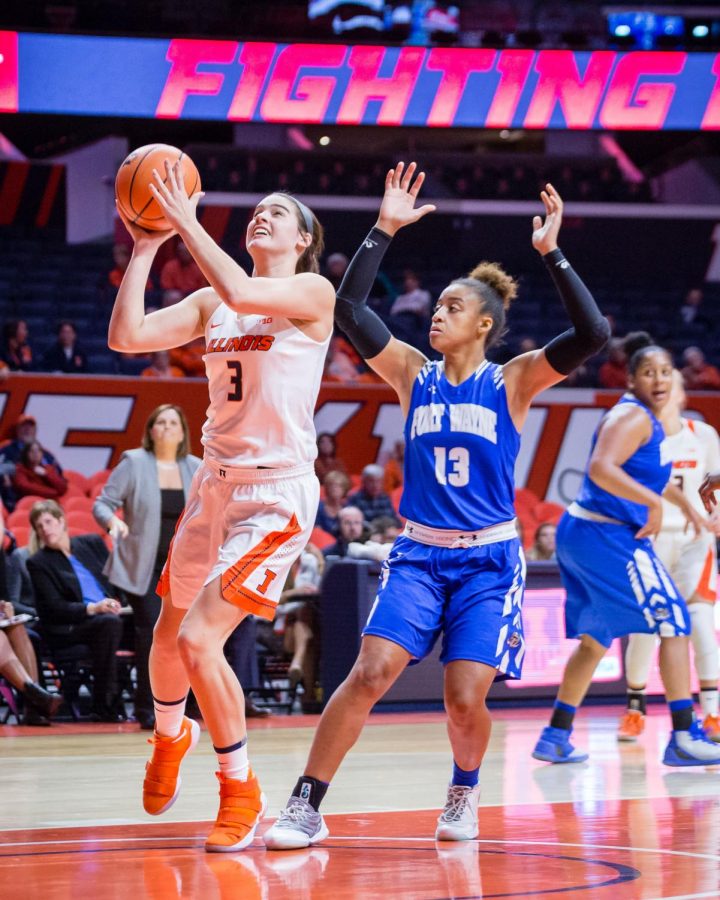 Not many basketball players have 96 collegiate games under their belt the first time they step onto the floor of the State Farm Center.

For most freshmen, the atmosphere of their first Division I game is daunting. But for senior Alli Ball, the scene was all too familiar.

The 6-foot-1 forward begins her journey as an Illini off of three seasons with the Akron Zips. After using three years of eligibility, Ball opted to play a fourth year while pursuing a master’s degree in strategic brand communications.

This summer Ball reentered the recruiting process. Meshing with a new team was a challenge, she said. But for Ball, coming to Illinois was the right choice.

“I think this summer I was in a little bit of limbo for a while because I was trying to figure out where I was going and who I was going to,” Ball said. “That was probably the most trusting times in my life, just knowing I would be in the right spot. It was definitely a transition in terms of that, a lot of faith went into that.”

With new head coach Nancy Fahey taking over the women’s basketball program, Ball didn’t quite know what she was getting into, she said. The veteran player didn’t want a clean slate, but instead wanted a program that would recognize her talents on the court.

Playing the game she loves has been a cornerstone of Ball’s collegiate career. She said coming to Illinois would allow her to collect ample playing time right off the bat.

“I think just the faith that they put in me and the role they saw me in was not impressive to me, but it just really flattered me as a contributor right off the bat,” Ball said. “And that’s all I really wanted was to be able to play.”

Over the past three years, Ball has sharpened her skills under nearly 100 games of basketball.

But coming to Illinois offered a brand new perspective, Ball said. With a new team and a new philosophy, her last year on the court could be her biggest learning experience yet.

“I think for me, college basketball has been a matter of time–experience is experience,” Ball said. “That’s been really helpful coming in, but coach has really been preaching about how we’re all freshmen on the court. Obviously approaching this opportunity a little bit different, because it is my senior year and last year to make an impact.”

So far this season, Ball posted a season-high 13 points against Fort Wayne and most recently went 2-3 in 3-pointers against New Mexico. Overall, Ball has logged 108 minutes and .545 field goal percentage averaging 12 points per game.

In her last year, Ball said she hopes she can be a force to reckon with on the court. Staying aggressive, especially against brand new Big Ten opponents is one of her goals, she said.

“At Akron, I tended to go on spurts of not even looking at the basket, and I definitely have improved in that aspect,” Ball said. “Just being a threat at all times and just wanting to make an impact.”

Finding the right program fit wasn’t the only perk of coming to Illinois. Ball said Illinois not only had the academic program she wanted but was also much closer to home in St. Louis.

“For me St. Louis being so close, it’s great adjustment being able to go home, and go home for the weekends,” Ball said. “I never got to do that at Akron and that has been a really cool part of this transition.”