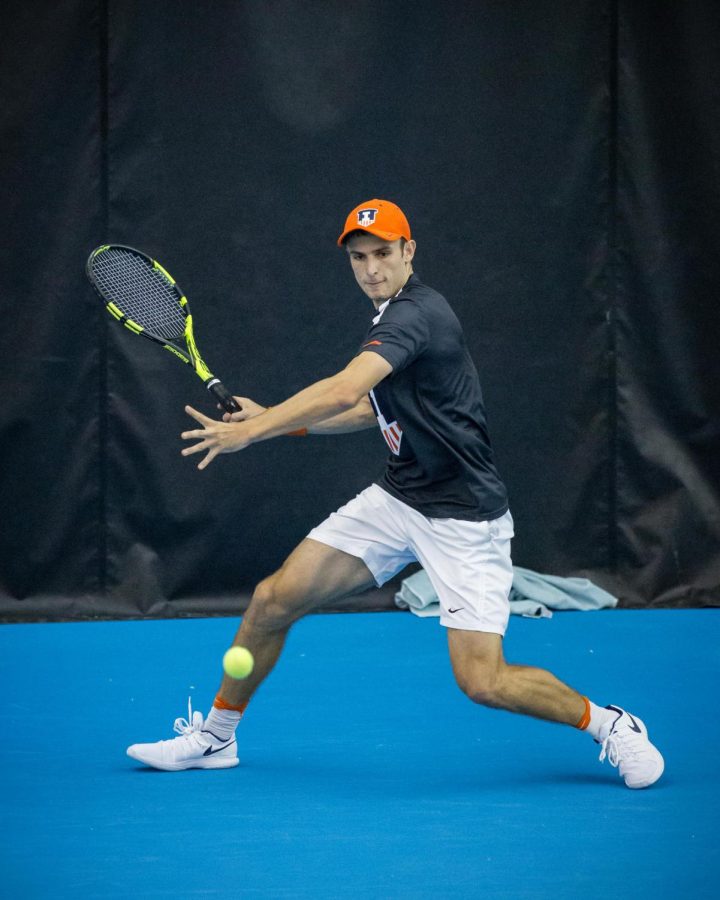 Illinois’ Aleks Vukic returns the ball during the match against California at the Atkins Tennis Center on Feb. 9. The Illini won 4-0.

It was a dually successful weekend for Illinois tennis, as both the men’s and women’s teams each came out with two victories.

For the men, who entered this week ranked No. 7 in the country, Saturday was a no-nonsense 5-2 victory over Iowa.

In doubles, it was the Hawkeyes who were victorious. Kareem Allaf and Larsen defeated Hiltzik and Vukic 6-4, followed by a 7-6 (6) win by Jake Jacoby and Joe Tyler over Brown and Caleb Chakravarthi to clinch the point, but the Illini’s singles success had already bagged the match.

Head coach Brad Dancer felt his team did a good job of responding to adversity.

“Today, I saw a resilient effort from our guys,” Dancer said to FightingIllini.com. “Iowa played a good match and pushed us. We had great leadership from Aleks Vukic, Zeke Clark and Vuk Budic today.”

The Illini then traveled to Lincoln to face the Cornhuskers on Sunday.

Brown got Illinois off to a hot start, defeating Nebraska’s Linus Erhart 6-2, 6-4. That would ignite an Illini run, as they would go on to take each singles matchup, with victories from Kovacevic, Clark, Vukic, Hiltzik and Budic.

The Illini would not repeat the same success in doubles, as Vukic and Hiltzik would fall 6-3 to the Cornhuskers’ combination of Toby Boyer and Linus Erhart. Budic and Brown could not find victory either, as Nebraska would clinch the doubles’ point with a 7-5 victory from William Grattan-Smith and Micah Klousia.

For the women, it was another dominant set of victories, as they defeated Rutgers 6-1 away before returning home and beating Maryland 4-1.

Freshman and New Jersey-native Mia Rabinowitz had a sweet homecoming as she defeated the Scarlet Knights’ Kat Muzik 6-0, 6-2 to begin the match. The rest of the Illini team would follow her victory with three more from senior Grace Tapak and juniors Jaclyn Switkes and Daniela Pedraza Novak. Rutgers got on the board with Maya Jacobs defeating Illinois freshman Emilee Duong, but the Illini responded as freshman Sasha Belaya beat Rutgers’ Jaci Cochrane 3-6, 6-2, 1-0 (6).

In doubles, the combination of Belaya and Pedraza Novak was victorious over the Scarlet Knights’ duo of Mingxiu Du and Muzik 6-1. Rabinowitz and Tapak would follow suit defeating Rutgers’ Jacobs and Lee Levy 6-0 to earn the doubles point for Illinois.

Illinois would continue its success in doubles, as Duong and Switkes combined to defeat Sullivan and Tour 6-2. Kawai and Rabinowitz would then clinch the point for the Illini, as they were victorious 6-3 over Maryland’s Kate Yemelyanenka and Anastasiia Gevel.