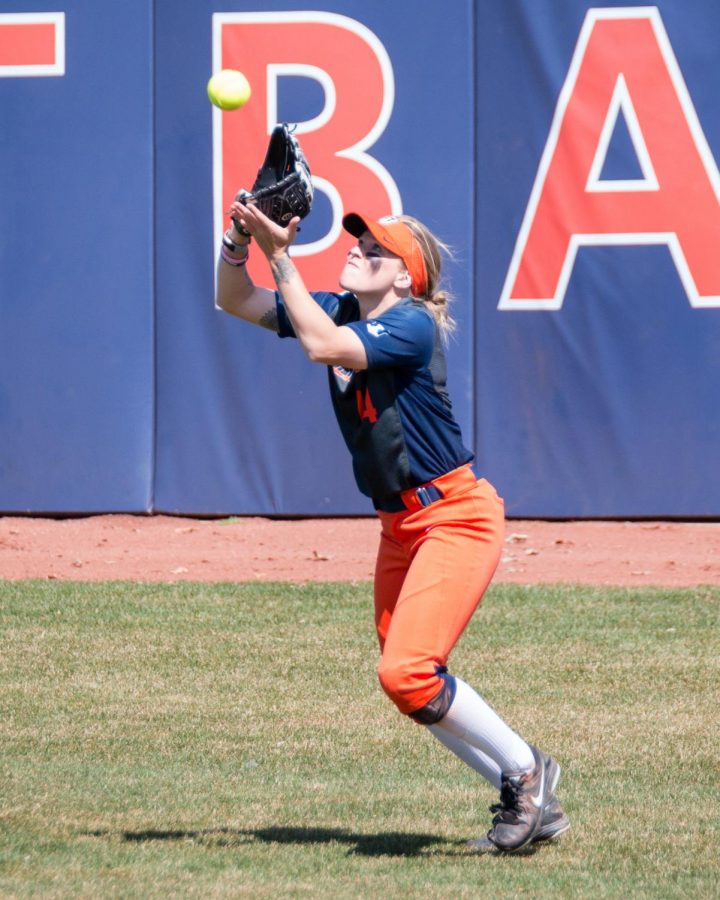 Illinois right fielder Maddi Doane catches a fly ball during the game against Minnesota at Eichelberger Field on April 1. The Illini won 4-3.

After coming up short in a seventh-inning rally the first game, the Illinois softball team took the field at Wisconsin behind its ace pitcher, Emily Oestreich.

Three batters into the game, the score was 1-0 Wisconsin, and there were runners on second and third.

Head coach Tyra Perry pulled Oestreich and the Illini never recovered from the deficit, dropping both games of their doubleheader against the Badgers.

“She wasn’t fighting,” Perry said. “When she’s not fighting, the batters own the box.”

This is something Perry has seen before in junior college transfers, but that lack of a fight is something she said affected the whole team.

“It’s the Big Ten; nobody’s gonna roll over,” Perry said. “If you want to win a game, you have to fight.”

Akilah Mouzon took over on the mound after that and was able to calm the storm, throwing three scoreless innings before the fourth, where a three-run home run stretched the Wisconsin lead to 4-0.

“I remained calm and knew that if I throw the pitch my coach calls, everything (will) be alright,” Mouzon said.

Perry said the Illini were not their usual aggressive selves at the plate, leading to the offensive struggles.

“We watched pitches go by and did not swing,” Perry said.

After scoring 20 runs in one game against Maryland, Illinois managed only four runs in two games, with only two of those coming off the bat of an Illini, the others on a fielder’s choice and an error.

The Illini struggled offensively but received some highlight-reel defensive plays from their outfielders. Carly Thomas and Doane made diving grabs in left and right field, while Kiana Sherlund also had a sliding, over-the-shoulder catch in centerfield.

However, for Perry, the highlights may tell an incomplete story of their defensive performance.

“It was great to see that, but we had some plays overall between both games that would’ve helped us in addition to those plays,” Perry said. “We’re just a bit inconsistent.”

Perry has preached consistency all year, but it looks like she’ll have to wait one more week.

“I think we’re right there,” Perry said. “And that’s why it’s so frustrating.”

The Illini were supposed to play one more game on Friday against the Badgers, but it was canceled due to the weather. The team’s next matchup will be a doubleheader at home against Green Bay on Wednesday.