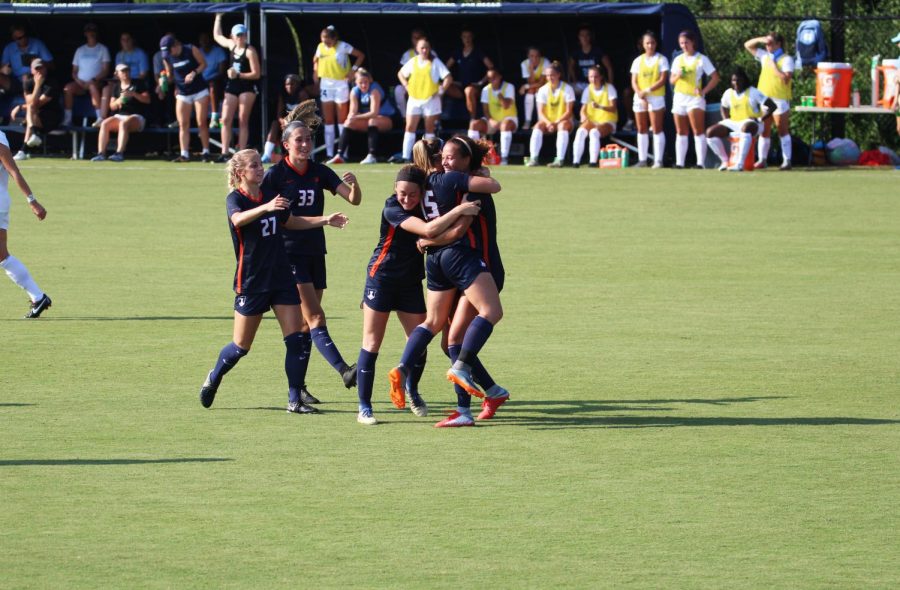 After finishing last season 5-14 the Illinois soccer team is already showing signs of improvement as the 2018 campaign kicks off.

To open the regular season, the Illini headed to North Carolina for matches with the Tar Heels and the Duke Blue Devils.

Against North Carolina, Illinois took an early lead through a 16th-minute goal from Kelly Maday, and kept the 1-0 lead heading into  half-time. However, they were unable to withstand the Tar Heel attack in the second half, conceding three goals within a 23-minute stretch, dropping the match 3-1.

In the following contest against No. 3 Duke, the Illini would grab an upset victory from the Blue Devils. After Duke opened the scoring in the 16th minute, Illinois freshman Makena Silber responded immediately with an 18th-minute goal. Katie Le put the go-ahead goal into the back of the net just before half-time, and the Illini dug in defensively to hold on for a 2-1 triumph.

“Over the weekend, our team just continued to grow,” Rayfield said. “Obviously you need to create chances to score goals against good teams, and we want to continue that. There was never a moment in either of those games where we weren’t fighting for each other.”

The Illini next traveled up to Chicago to take on DePaul, but lost 3-1.

Rayfield appreciates the obstacles that the nonconference season presents.

“The nonconference schedule is put together to present challenges to our team,” Rayfield said. “We went out to North Carolina, played two top teams, we go play an in-state rivalry on an artificial surface in an urban environment, so we’re looking for our team to be resilient.”

Beating a team with the prestige of Duke is already a bigger accomplishment than anything the Illinois  achieved a season ago.

Rayfield often preached about building a culture last season, and feels that the early success is a sign of a culture within the team that is changing for the better.

“I think the culture has continued to evolve, and I think the ‘whatever it takes’ mentality has been established,” Rayfield said. “They’ve preached that culture and are encouraging that in each other, and that makes a difference.”

Rayfield has multiple players that embody that mentality, and having them back for another year will continue the team’s development.

Jaelyn Cunningham  led the conference in saves and finished second in school history for single-season saves with 106. While critics may argue she only saved that many shots because the Illini defense allowed more attacking pressure than most others, Cunningham continued to come up with stop after stop, keeping her team in games they would have been long out of otherwise.

Katie Le went into last season as a true freshman from the east coast buried on the depth chart, but she worked her way up the pecking order and was often trusted by Rayfield to use her pace as an energetic spark plug for Illinois as the season went on.

Although she did not find the back of the net last season, the Virginia native made sure to get on the scoring sheet early on in her sophomore campaign, scoring the critical goal at Duke.

While Illinois may not yet be ready to seriously contend in the Big Ten, performances like the one against Duke lay the foundation for better things to come.