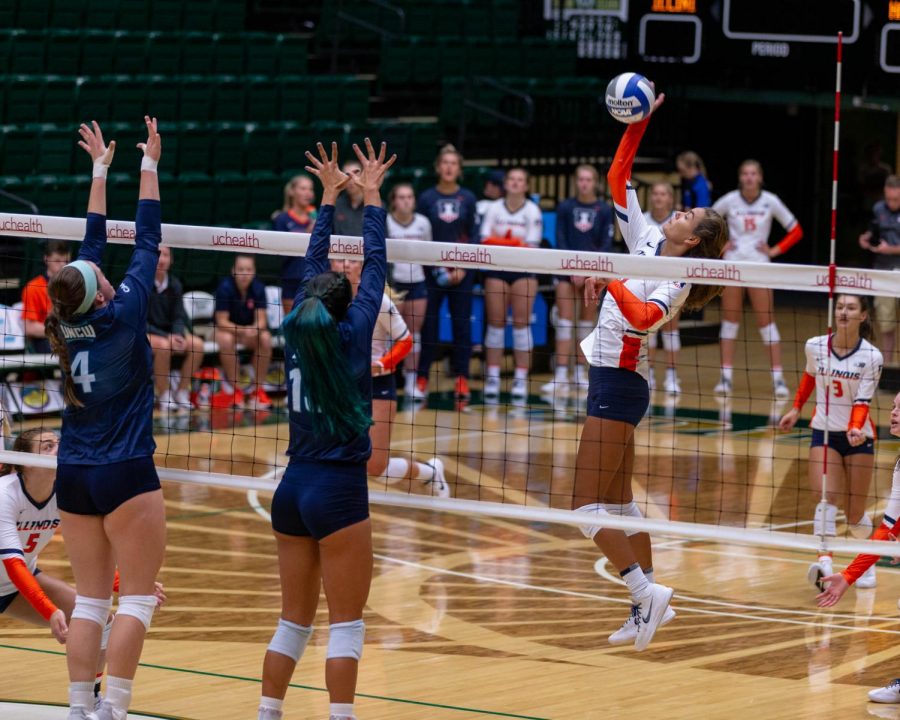 Illinois volleyball played against the University of North Carolina-Wilmington at the Colorado State Torunament on Friday. The Illini won 3-0 and went on to sweep the tourney as the team looks to expand on a 2017 season that took them to the Sweet 16.

Head coach Chris Tamas and the Illinois volleyball team began their 2018 season with a sweep at the Colorado State Tournament. The Illini posted a 3-0 performance against North Carolina Wilmington, a 3-2 victory over No. 25 Colorado State and a dramatic 3-2 win over Northern Colorado to close out the tourney.

The squad returns to the court after a loss to Michigan State in the Sweet 16 of the 2017 NCAA tournament. The women went 23-11 and finished fifth in the Big Ten under first-year head coach Chris Tamas.

Illinois returns 12 members from last year’s team and is one of seven Big Ten schools ranked in the top-25 of the AVCA preseason poll, including last year’s NCAA Champion No. 2 Nebraska, No. 4 Minnesota and No. 6 Penn State.

Brown joins the Illini from St. Francis DeSales high school in Columbus, Ohio. In addition to Brown’s accolades as a high school setter, including four All-Central District honors and four First-Team All-Central Catholic League awards, she makes up one of three setters on the Illini roster. She joins senior setter and AVCA All-American Jordyn Poulter and sophomore Kylie Bruder.

Fleming transferred into the Illinois volleyball program after spending two years at the University of the Pacific as a middle blocker. During her time as a Powercat, Fleming started 229 sets and toted 285 kills with a .347 hitting percentage and 125 total blocks.

While the team continues to add new talent,  returning Illini had the opportunity to sharpen its skills across the country this summer. Poulter spent the summer leading the U.S. Women’s Volleyball National Team at the Pan American cup to a gold medal as the only active collegiate athlete on the roster.

Tamas said her success on the court this summer comes from her drive as an athlete.

“She’s always been (driven),” Tamas said. “That’s the reason she’s been with USA Volleyball because she is the way she is. But that’s all I ask of her — to work hard every day.”

According to Tamas, the summer months established a solid foundation for his second season at the helm of the Illini.

“Summer was good, we had a lot of good workouts,” Tamas said. “They came back and looked good for our first handful of practices.”

During the summer, the Illini coaching staff is allowed limited contact, but the players take part in individual strength and conditioning workouts.

This fall the Illini’s schedule is slightly harder than last seasons, according to Tamas. Illinois is slated to square off against conference championship contenders including No. 17 Washington and No. 13 Creighton.