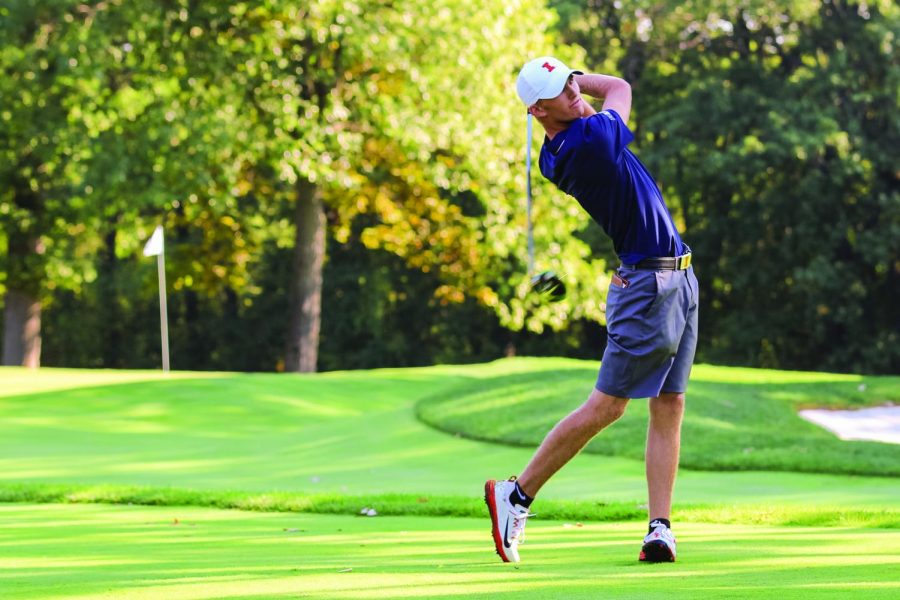 The Illinois men’s golf team will make its fall debut at the OFCC/Fighting Illini Invitational at home this week, but last year’s No. 10-ranked team will have a different look this season.

Last year, the program graduated seniors Dylan Meyer and Nick Hardy, who have both spent the summer months playing on the professional circuit. Leadership will be handed down to the three upperclassmen on the squad, juniors Giovanni Tadiotto, Michael Feagles and Bryan Baumgarten.

As sophomores last season, the trio made up a productive backbone that led the program to its fourth consecutive Big Ten title and 11th consecutive NCAA tournament appearance, 13th under head coach Mike Small.

While it has lost two significant keystones, the junior-led squad is out to prove they are still one of the best teams in the NCAA.

“Three of us juniors live together, and we’ve talked about this year a lot,” Feagles said. “We have big shoes to fill this year, and our attitude going into this is (that). We know that everyone’s reaction is that we’re probably not going to be as strong this last year, but we’re looking to prove people wrong.”

Despite the roster change, Illinois still boasts a strong squad of upperclassmen.

Baumgarten led his class, going 13-over par at the tourney to tie for 61st place. Meanwhile, Feagles tied for 68th individually with 15-over, and Tadiotto shot 21-over par to tie for 79th. Although the group didn’t play their best golf at the NCAAs, Baumgarten took home ninth at the NCAA Columbus Regionals, and he collected his first individual championship last season at the Bighorn Invitational.

Tadiotto followed closely behind Baumgarten, tying for runner-up at the Bighorn Invitational, sinking a career low 65 (-7) during the final round of match play. He also tied for 22nd at the Big Ten Championships and placed three top-25 finishes during the regular season last spring.

This summer, each junior dabbled in amateur tourneys. Both Tadiotto and Baumgarten appeared in the R&A British Amateur, while Tadiotto placed 21st at the European Amateur Championship, scoring 1-under par. Feagles also tied for 16th at the Sahalee Players Championship this July.

The junior class is also aiding the four new freshmen with their transition into collegiate competition.

“We all get along very well,” Tadiotto said. “We only started school (a) couple days ago, but we’re already very tight and very close. We hang out all the time, and I feel really, really close to all the freshmen.”

Belgium-native Tadiotto has long been the only international athlete on the men’s golf team. However, this year , the nine-person roster will include another athlete from his home country — Adrien Dumont de Chassart joins the Illini from Viller la Ville, Belgium.

“I’ve had two years to get along with the team and to see what American life is like,” Tadiotto said. “I would think for him it will make him a little more comfortable. It’s always nice to have a feel of Belgium here, and having two people on one team is amazing.”

While the team has undergone a significant roster change, the remaining upperclassmen are focused on defending the dominant legacy put in place by Hardy and Meyer.