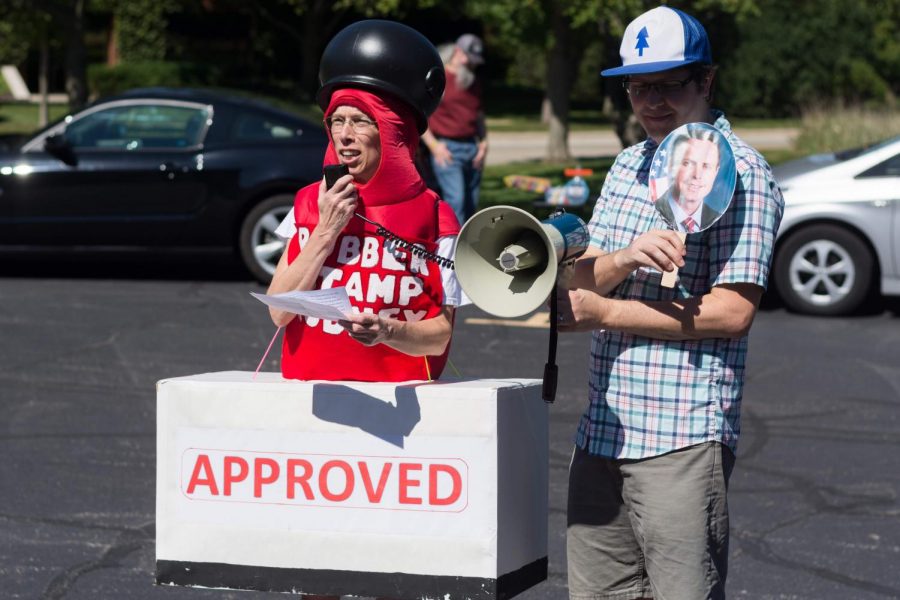 Ellen Leyerle, a Champaign resident, dressed as a rubber stamp to criticize Rep. Rodney Davis’ support for President Trump’s policies while she spoke at a rally outside Davis’ Champaign office.

Diana Dudzienski, Champaign resident, said she waited outside in the sun for nearly two hours for a chance to speak with Rep. Rodney Davis the last time the congressman held open office hours in Champaign in May 2017. She never got to speak with him.

After explaining she had medical issues and was awaiting a kidney transplant, a Davis staffer took down her name, phone number and address, and promised to get back to her. Dudzienski said she never received a response.

Dudzienski, along with a group of around 40 protesters, gathered outside of Davis’s Champaign office Saturday to protest the 17-month period where Davis held no open meetings with constituents in Champaign. The rally was organized by the grassroots organization Champaign-Urbana Indivisible, which advocated unseating Davis in November.

“It’s been over a year since Davis held an event open to the public in Champaign-Urbana, and it’s absolutely unacceptable for someone who receives a $174,000 taxpayer salary to willfully ignore the voices of a huge community like Champaign-Urbana,” said Cameron Raab, co-founder of CU Indivisible.

Davis doesn’t hold public town hall meetings and instead opts for “Open Office Hours,” where constituents are led into Davis’s office in small groups to talk, and tele-town halls, where constituents can call into a line at a set time with pre-screened questions.

“Just because we don’t call it a town hall doesn’t mean it’s not serving the same purpose, and we would argue these one-on-one public meetings allow constituents more time and opportunity to be heard by their congressman,” Ashley Phelps, spokeswoman for Davis, said in an email.

Phelps said Davis has held many open office-hour sessions in the last 18 months and has met with hundreds of constituents.

Phelps said, “Congressman Davis just held Open Office Hours in Tolono on August 3rd that were publicly advertised and available for anyone to come in and talk about any issue they want, and many from this same group were there to protest them, so honestly this additional protest rings a little hollow.”

Grace Hebert, administrator for CU Indivisible, said during Davis’s open office hours in May 2017, she waited for hours before being led into a room with her friend and a group of around six strangers to speak with the congressman. When she entered the conference room, she said she received less than a minute to express her concerns.

Though the rally was billed as an event to protest the lack of open communication between the congressman and his constituents, many of the speeches focused on unseating Davis in the November election and advocating for a slate of progressive issues, including gun control, immigration reform and healthcare.

“Town halls are a basic democratic structure. They allow everyone to have access to their representative that they don’t normally have access to,” Hebert said. “He claims he wants to listen to people, but he doesn’t hold town halls.”