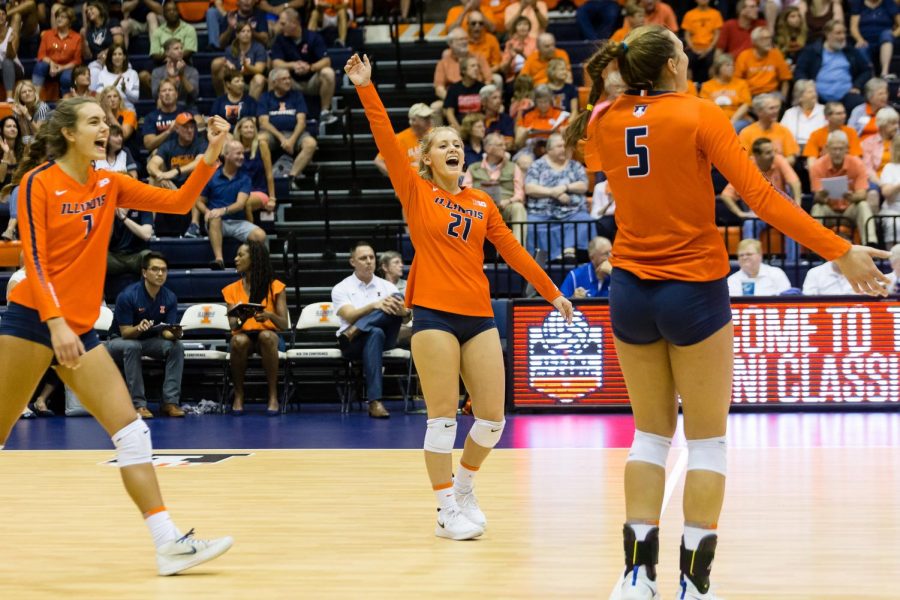 Down 15-8 in a pivotal fourth game on the road against undefeated No. 16 Purdue, the Illinois volleyball team rallied around a familiar saying.

“We just stayed confident and trusted in our training,” said junior outside hitter Beth Prince.

Trusting their training allowed the Illini to overcome that deficit to tie the match and eventually continue their undefeated streak, which is now at 13.

“Purdue played out of their mind,” said senior middle blocker Ali Bastianelli. “It was a good first battle for us to show what Big Ten play is going to be like.”

Illinois has reason to put trust in its training; few teams did more to prepare for the rigors of Big Ten play in the nonconference season than the Illini, who beat four ranked teams, three of them on the road or neutral sites.

However, despite all their nonconference preparation, head coach Chris Tamas felt it was like starting the season new.

“It’s a lot like playing your first match over again,” Tamas said. “You’re gonna have to have answers to some problems and be a little more flexible.”

Against Purdue, top-hitter junior Jacqueline Quade was held to only 11 kills on a .065 hitting percentage. The solution was Prince, who finished the game with a team high of 19 kills on a .279 hitting average, including the game-four-ending kill that was reviewed and overturned after being initially called out of bounds.

“She was really consistent,” Tamas said. “Not everything was lined up great for her; she was able to manage really well and when the swings were there, she took them.”

As per usual with the Illini, Prince credited her big game to the rest of the team and staff.

Illinois also picked up 12 aces, with five from Bastianelli and four from Quade. On the other side, the Boilermakers were lead by a familiar face, Sherridan Atkinson, who had a game-high 21 kills on .333 hitting percentage.

“She’s got a lot of range,” Bastianelli said. “We knew she was going to get her points; the mentality was ‘how do we respond to that?’”

Behind Atkinson, only one Boilermaker had over 10 kills, while four Illini reached double digits.

“We know it’s a pretty high-pressure situation going against a team like that in their home gym,” Quade said. “We handled it the best we could tonight.”

Tamas also said while it may not have been the best the Illini have played this season, he was proud of the win. For Prince, games like the one against Purdue are why she and her teammates came to Illinois.

“It’s all about competitive games every single night,” Prince said. “We all came to the Big Ten knowing we’d be playing with and against the best players in the country.”

“They’re all gonna be tough,” Tamas said. “It’s good because we can learn from it.”