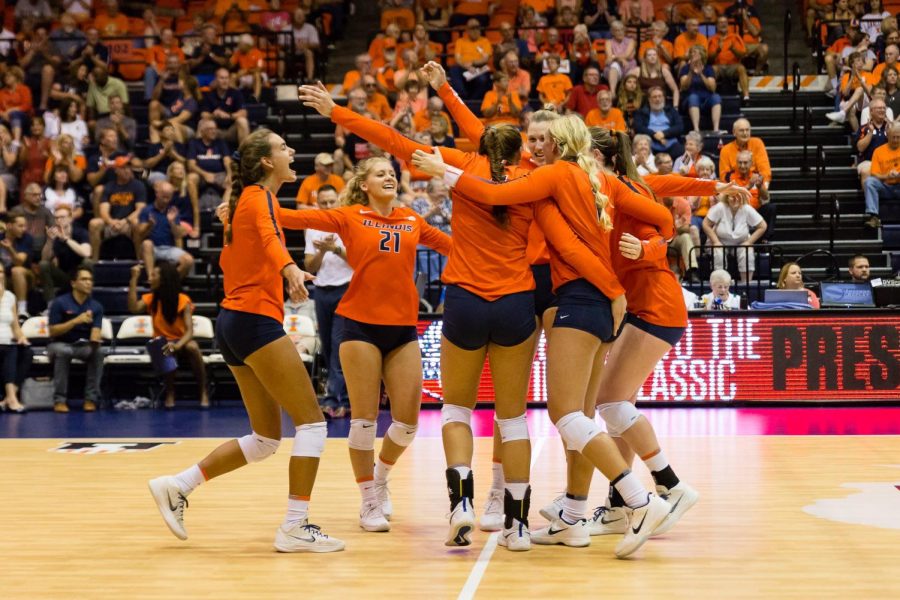 The weekend will prove to be a busy and exciting one for the Illini as they continue to forge ahead through Big Ten competition.

With classic conference rival Iowa on Friday and last year’s national champion Nebraska on Saturday, the friendly confines of Huff Hall are sure to be anything but quiet as the undefeated Illinois squad looks to continue their successful season.

Prince and the Illini are returning to Champaign after a weekend on the road at Purdue and Indiana, respectively. The team’s match against Indiana was particularly hard-fought over five sets, but Illinois secured a 2-0 record in the Big Ten when the dust settled.

Also fueling the Illini’s momentum into the weekend is an increasing NCAA ranking — something head coach Chris Tamas has reminded his team not to put too much attention toward.

“It’s nice to be recognized for what you’ve done, but we talk a lot about it’s not how we start it’s about how we finish a season,” Tamas said. “Obviously, starting 13-0 is a nice start, but we’re about to step into the meat of our schedule here. It’s a nice start, ranking reflects well, but we still have to continue on that path and make sure we’re taking care of business whenever we can.”

Standing in Illinois’ way of taking care of business is a relatively young Iowa team and — on the other end of the spectrum — a seasoned Nebraska squad. Iowa currently stands at 9-4 for the season, losing last weekend to Michigan at home. Meanwhile, Nebraska is ranked third in the nation this year, with a record of 11-1.

Illini fans will have an interesting greeting for both teams. The Hawkeyes and Cornhuskers are arriving in Champaign during the fan-favorite Stuff Huff Week — and the Saturday match against the Cornhuskers is so anticipated that reserved seating sold out on Tuesday. The rowdy tradition is one that Prince has experienced many times and is one of her favorites.

“I love Stuff Huff, and I attended Stuff Huff as a recruit,” Prince said. “It’s an amazing atmosphere, and it’s really fun to feel that support from everybody when we have that many people. It’s a pretty incredible environment, and I think it’s definitely tough to play in to come in and have the fans so close and it’s really exciting.”