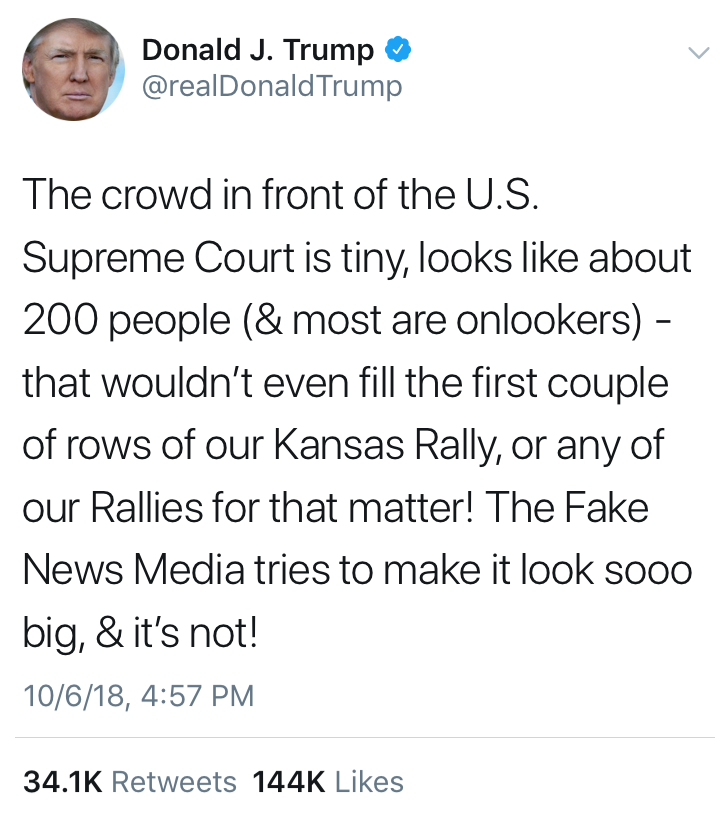 A tweet from President Donald Trump on Saturday. A new course is being offered to explore the relationship between the Trump administration and mainstream media.

Students who are looking to add an eight-week course for the second half of the semester now have the option to take a journalism course called Trumpaganda — The War on Facts, Press and Democracy.

This semester is the first time this journalism course is offered, and it will explore the Trump administration’s combative relationship with mainstream media and its subsequent labeling of certain news outlets as “fake news.”

The course will be taught by Mira Sotirovic, associate professor in Media, who is a Karin and Folke Dovring Scholar in propaganda. Sotirovic also published a chapter in the book “Communication in the Age of Trump,” which discusses the unconventional nature of Trump’s presidency and his prominent usage of Twitter to release important information and opinions.

The course will prompt students to recognize the varying strategies and tactics the Trump administration employs to deal with the press, and how the usage of propaganda exists in a democracy, Sotirovic said in an email.

“Propaganda is effective only if it is concealed and camouflaged as something else, such as news, advertisements or PR releases, and it is critical to learn how to detect propaganda and recognize propagandistic features of any communication, including presidential,” she said.

Sotirovic said students should take this course because propaganda is a form of communication and influence that could be anywhere.

Stephanie Craft, head of the journalism department, said students in all types of majors are encouraged to take this course to become better informed about the Trump administration’s way of communicating to the press.

“This particular course is the first of what we hope will be a series of what we’re thinking as pop-up courses, where we’re trying to identify things that are very in the news and build an eight-week course around it that would be of interest to the broader University community, not just journalism majors,” Craft said.

Craft said the kind of pop-up idea has been something the faculty has been talking about for a while.

Elise Guillen, freshman in LAS, said in a message she is interested in taking Trumpaganda because she wants to learn about how things portrayed by different sources of the media impact how she personally view things in the society as a whole.

“Based on the name of the class, I can tell that I would probably learn a lot about Trump and propaganda,” Guillen said. “Although I’m not the biggest fan of Trump, it’s important to know what the president is doing and how we, as Americans, are influenced and even portrayed with things like his tweets.”