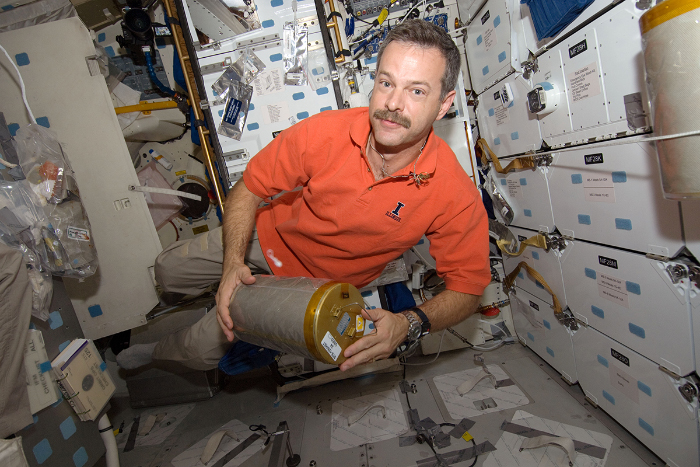 Scott Altman served as a NASA astronaut for 15 years, sporting an Illinois polo shirt on a mission to the Hubble Space Telescope.

Former NASA astronaut, U.S. Navy captain and University alumnus Scott Altman was selected to serve as the grand marshal for the annual Homecoming Parade, which will be on Friday.

“It is an awesome opportunity to select one of our great alumni to serve this role and to be able to provide opportunities for students to learn about his achievements and interact with him throughout the weekend,” said Will Webb, Greeks Support Homecoming planning committee chair.

The committee is in charge of selecting a grand marshal each year, and Altman was this year’s first choice, Webb said.

To prepare for this role, Altman is remembering his time at the University and is looking forward to talking to students about their dreams, he said in an email.

During his time at the University, Altman was a member of Sigma Chi Fraternity, which he said was one of the highlights of his life.

“When we heard Scott Altman was selected as the Homecoming Parade grand marshal, the entire chapter was very proud and also very excited for him,” said Kevin Steiner, current chapter president of the Kappa Kappa chapter of Sigma Chi, in an email.

Steiner said the house takes a lot of pride in having an alumnus that has been sent to space and done great things for the country. It is not something many Greek houses can say.

“All of our alumni are very important to us, and Scott’s name is one of those that really stands out to us. His accomplishments have definitely not gone unnoticed, and I hope that is something he realizes,” Steiner said.

Altman graduated in 1981 as an aerospace engineering major and was hired by NASA in 1995.

“My engineering degree made it possible for me to become a navy pilot and later a test pilot. The things I learned in class and socially helped me mature and succeed,” Altman said. “My education at Illinois was the foundation for everything I achieved.”

Before he retired in 2010, he finished four space shuttle missions in his 15-year-long career at NASA. He was also inducted into the U.S. Astronaut Hall of Fame this year.

The last time Altman was on campus was in 2011 to receive the College of Engineering Alumni Award for Distinguished Service.

“I do feel that going to Illinois was a tremendous help in any success I achieved,” he said.

One Homecoming tradition is a movie screening on the Quad. This year, “Top Gun” will be shown in honor of Altman, because he is featured as a stunt pilot for Tom Cruise.

In the film, Altman performs aerial acrobatics flights, which he learned from his flying experience. Altman said he is “very thrilled and honored to be a part of the Homecoming celebration.”

“I am really looking forward to being back on campus and seeing what has changed and what I remember,” he said.