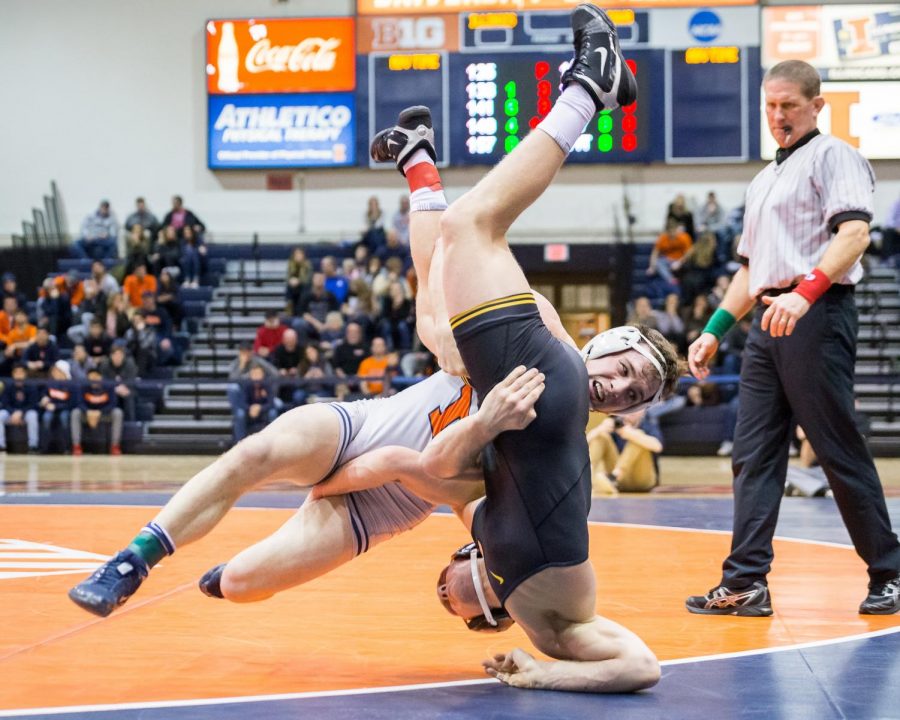 Illinois’ Eric Barone wrestles with Iowa’s Kaleb Young in the 157-pound match at Huff Hall on Friday. The Illini lost 31-8.

The No. 13-ranked Illinois wrestling team (2-4) struggled against No. 3 Iowa (9-0) at Huff Hall on Friday. The Hawkeyes beat the Illini 31-8. The Illini met the Hawkeyes coming off a loss to the No.8 Minnesota Golden Gophers, where the Illini gave up two pins and two major decisions.

Illinois went 3-7 overall against the Hawkeyes, picking up wins from No. 4 Mike Carr, No. 12 Eric Barone and No.2 Emery Parker. The team struggled against the Iowa offense, giving up two pins and a major decision.

The Illini started slowly by dropping their first two matches, one by a pin to move the team score to 9-0. In the second match, 133-pound sophomore Dylan Duncan took Paul Glynn into overtime, but lost after a takedown midway through the first overtime period. Glynn celebrated by shushing the Illinois crowd, causing tensions to rise in Huff.

In the next match, Carr added another win to his season when he beat No. 19 Max Murin, in a match that came down to the last 30 seconds. The match was tied 1-1 going into the third, but what looked to be a pivotal review by the referees midway through the final period resulted in two points for Murin on a takedown.

After the review, only a minute remained in the match and Carr was down 3-1.

He started in the down position, escaped, scored a takedown, then scored two points after a near fall, almost pinning Murin. Carr earned five points and the lead, which he kept until the end, slashing the Hawkeye’s overall lead to 9-3.

“There was only 45 seconds left and I was losing, so I had to make something happen fast,” Carr said. “And usually when you’re down, guys just want to win so it’s almost like they get stalled out a little bit. He just expected to win after that cause he rode me for a while and as soon as I got out he kind of backed up, and that kind of opened up the shot for me to take him down and put him on his back.”

The next Illini win came after Eric Barone upset No. 5-ranked Kaleb Young with an overtime takedown. It was Barone’s second win of the season against a No. 5 opponent. He also won against No. 5 Ke-Shawn Hayes, from Ohio State, at the Cliff Keen Invite earlier this season.

After the overtime takedown, the Illini were penalized after Barone said something to the Iowa bench. The team lost a point, making the score 13-5.

“It’s never good on the program if you lose a team point,” Barone said, “The coaches are never happy. I kind of let my emotions get the best of me because there was some personal stuff that Iowa did to me when they beat me in an overtime match at the Midlands.”

Barone was referring to a time when he lost to an Iowa wrestler at the Midlands Championships in overtime. An Iowa coach then celebrated in front of Illinois assistant coach Mike Poeta. Head coach Jim Heffernan and Barone said he let the emotions get the best of him on Friday.

The Illini dropped four of its next five matches, including a stalling disqualification and a pin. The final win of the night came for Parker, as he extended his win streak to 11 and remains unbeaten this season.

Illinois has a quick turnaround before its next competition, as the team will travel to Nebraska to compete in a dual meet on Sunday.

“(We have to) recover as much as we can today,” Barone said. “Get on the bus tomorrow and travel to Nebraska and get ready to try and get a team win.”