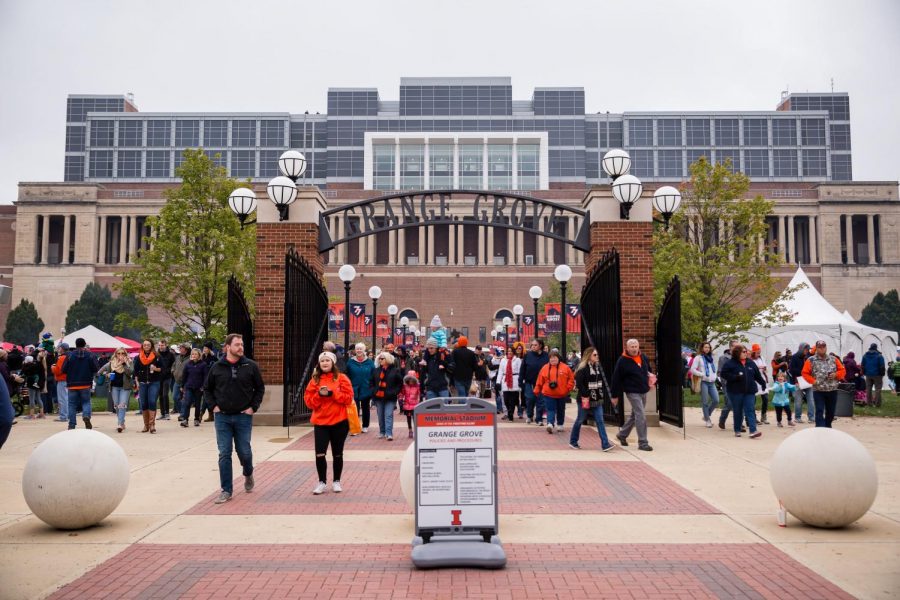 Illini football fans fill Grange Grove before the game against Purdue at Memorial Stadium on Oct. 13.

The Ready Campus is designed to take over a decade to complete and achieve bronze, silver and gold recognition for emergency preparedness. It takes about three years to reach silver and three more years to reach gold, said president of IEMS and senior in engineering Nathan Cornwell.

“Any organization appreciates recognition, but we wanted it to be meaningful recognition,” Cornwell said. “So we did it right and actually took the time to include everyone so that if this were to be called upon it would actually be used to its extent. And that’s where we arrived at for bronze.”

Considering IEMS did three years of work in one year by achieving bronze recognition, the organization is more than happy with this result, Cornwell said.

“Within one year, we went from zero within our organization to reaching the sixth year mark of planning, so it was a moonshot to go for six years of work within one year,” Cornwell said.

IEMS wrote the first Incident Action Plan for the campus to capture the response plan at-home football games in fall 2007 to follow the national model for emergency response, Brian Brauer, adviser of IEMS, said in an email.

IEMS is the primary agency on campus and provides CPR, Automated External Defibrillators and First Aid training on campus.

“That is kind of the whole point, is that as a campus we’re prepared,” Cornwell said.

Cornwell said Memorial Stadium is one of the largest event facilities on campus.

“That’s the home base for the marathon; that’s every football game, commencement. So if we can cover that, adapting that framework to other buildings and events on campus is a lot more straightforward,” Cornwell said.

IEMS is already starting to do this. It has taken the plan of action and modified it for the Krannert Center.

“We’re going to take the framework of that plan and use it for all of our smaller graduation events in addition to commencement,” Cornwell said.

The main changes in the emergency actions plans lie in the realm of communication.

There are already contingency plans for all of the various incidents that have been identified by the Department of Public Safety, but many of them are delegated to very specific safety or service groups without involvement from the other people present at games, Cornwell said.

“That was a main part of the plan…making sure that, if there’s any type of incident that occurs, every single public safety element at that game has a part to play in ensuring safety, safe evacuation, safe response to whatever that incident is,” Cornwell said.

IEMS has been working to revise the IAP for the stadium and numerous other buildings on campus. This emergency procedure helps lay out how groups will respond and what people and patrons will do in emergency situations such as fires, bomb threats, severe weather and active shooters.

The IAP revisions for Memorial Stadium are a part of a much broader project that IEMS has been working through, Cornwell said.

IEMS had a strategic planning session in 2016, which identified areas in both training and response where IEMS wanted to grow and excel.

The first target was to become a HEARTSafe Campus, a national designation that evaluated the preparedness of our campus to respond to a person in Sudden Cardiac Arrest, Brauer said.

Through this program, the campus has now met the requirements of a HEARTSafe campus by making sure that over 5 percent of the University population is trained in CPR and ensuring there are well-maintained AED, as well as a campus emergency response plan for a cardiac arrest.

“Additionally, IEMS assessed all of the AEDs on campus and mapped the devices in PulsePoint and IEMS was recognized for Excellence in Fire-Based EMS by the Congressional Fire Service Institute and Masimo in 2018,” Brauer said.

Another one of the programs that has fallen under the umbrella of improving campus safety is the National Standards for Emergency Preparedness.

“One small part of that is making sure that large events on campus have very robust plans in place if anything were to go wrong, and to just make sure the whole operation runs smoothly,” Cornwell said.

Through the EMS Ready Campus program, IEMS focused on preparedness for cardiac arrest events, improving training and planning for other emergencies on campus at various types of events that it staffs.

“We collaborated with the leadership of the University Police Department, Champaign and Urbana Fire Departments, McKinley Health Center, Carle Hospital and Arrow Ambulance, and the County Emergency Management Agency to define and document IEMS’s role in an emergency,” Brauer said.

The plans could then be shared with the IEMS membership, and drills and exercises could be designed and led by IEMS to practice responding to various events.

“While a larger event will be managed primarily by the local emergency responders, IEMS plays a critical role during the initial stages of a large-scale emergency to lay a foundation upon which other agencies can build,” Brauer said.