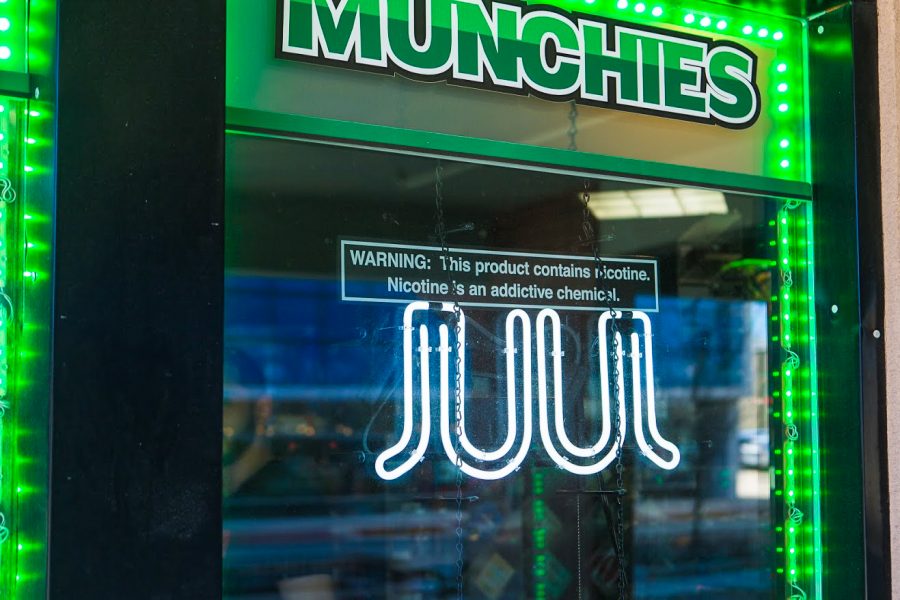 Along with tobacco products and alcohol, Evergreen Tobacco on Green Street advertises JUUL products as well. In a recent survey, 32% of college students reported owning some form of an e-cigarette.

Legislation that will raise the legal age for buying tobacco from 18 to 21 was signed by Illinois Gov. J.B. Pritzker on April 7. The law will go into effect at the beginning of July and would make Illinois the eighth state to raise its tobacco age.

However, in the past few years, while the legal tobacco age is still 18, college campuses across the United States have seen an increase in smoking and vaping.

According to a study, which surveyed and recorded responses from 2,389 students, about 32 percent of students reported that they own some form of an e-cigarette, and 50 to 55 percent reported seeing their peers vaping during class or in the library.

The University is considered a smoke-free campus, which means it also prohibits e-cigarettes usage. However, students still continue to use these devices, despite the numerous signs around campus.

According to smoke-free campus, the efforts to ban tobacco was successfully implemented in 2014, “banning the use of all smoke-producing tobacco products on campus.” Additionally, as these efforts continue, the goal for the University is to be a 100 percent tobacco-free campus by August.

All campus-owned property, indoor and outdoor, as well as private vehicles parked on campus property are all part of the banned locations.

In spite of this, Jerry Zhang, author of the study, does not think e-cigarette use is harmful to the surrounding community.

“Students are fairly OK with them as long as they’re not disruptive,” Zhang said in an email. “Many are OK with others using it because it doesn’t quite affect them, in the same way, the noxious smoke that normal cigarettes produce and invade their space.”

Zhang said that smoking and vaping are choices made by the users that others around them have to live with and understand.

“The attitude towards e-cigarettes are similar to combustible cigarettes,” he said. “They’re the smoker’s choice to smoke, and that’s a decision they can make for themselves.”

A user’s reason behind using e-cigarettes differs between most people, and may not always be just for fun.

“It provided an alternative to cigarettes, which I was trying to quit,” Nandy said.

However, she said she still feels the harmful effects of vaping and is trying to quit vaping and nicotine entirely.

“Vaping is definitely something that I’m currently trying to quit because I’ve found that it’s making me more addicted to nicotine than cigarettes used to,” she said.

Colin McQueen, freshman in LAS, also said vaping has become a constant need for him, which he also is trying to get away from.

McQueen said the only time he is not vaping is when he is in class or eating and continues to try and quit.

“I tried quitting in November,” he said. “Most difficult thing. Going to try again this summer after I finish the semester.”

The Illinois Department of Public Health also funds a free program for students who want to quit smoking tobacco.

“Clients are educated and counseled in tobacco cessation according to the individual’s needs,” according to the Campus Wellbeing Services. “The use of nicotine replacement therapies are integrated into the cessation program, with a special emphasis on behavioral modification.”