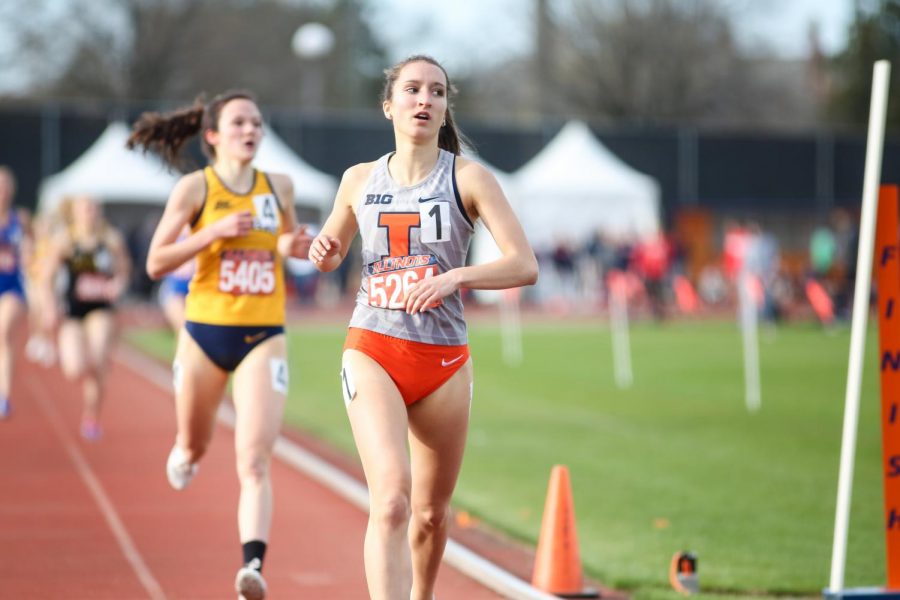 On April 6, the Illini track and field team competed at The Reveille at Texas A&M University. The women’s track and field team had solid performances, including sophomore distance runner Nicki Cast finishing third in the 3,000-meter steeplechase and senior long jumper Janile Rogers finishing third in the long jump with a leap of 6.18 meters. The team finished seventh out of eight teams.

Despite the decent performances, the meet featured a three-hour-long rain delay, and some athletes found creative ways to stay entertained in the interim.

Several athletes, in a video posted to FloTrack’s twitter page, recorded themselves “hitting the woah.” The Woah originated in Texas in 2017, according to Know Your Meme, but has recently gone more viral due to its presence in videos posted to the Vine-like website TikTok.

The Illini came back to Champaign for the Illinois Twilight meet Saturday, although there were no final team scores. The weather was a breezy high of 57 degrees and great for running, according to the team.

The stands were full, music played over the speakers and for the vast majority of the meet, there was a bouncy house for the children in attendance during the afternoon.

The Illini saw strong performances Saturday, with both the women’s and men’s relay teams taking first with times of 44.65 seconds and 40.34 seconds, respectively. Both teams finished in first at the Ole Miss Classic two weeks ago, but the women’s relay team finished that race in 45.14 seconds.

Quinn won the 100-meter dash with a time of 10.38 seconds, and sophomore sprinter Jason Shannon finished in second in that heat and second overall, with a time of 10.55 seconds. Quinn has the No. 2 time in the event, per TFRRS.

Shannon started the 4×100-meter relay, and Quinn was slated to be the anchor but didn’t compete in that event. Freshman sprinter Bret Dannis won the 110-meter hurdles with a time of 14.44 seconds and was the third leg of the 4×100 meter relay. Senior sprinter Joe Haight was the second leg of the relay.

Quinn said despite it being his last home meet as an Illinois athlete, he hopes to come back and compete unattached.

“It’s an honor to really run at this race,” Quinn said. “We don’t get to compete very often in front of our home crowd.”

Senior Jesse Reiser led the Illinois men’s distance squad with a title in the 1500-meter run with a time of 3:44.33, and seniors Denis O’Callaghan and Billy Magnesen finished second and fourth behind him, respectively. Senior Dan Lathrop finsihed 19th overall in heat one.

Sophomore pole vaulter Kristin Slaughter finished in second at 3.80 meters. Marquette’s Rachel Seraphine won the event with a height of 3.80 meters as well, but the tiebreaker was the number of misses on the previous height. Junior pole vaulter Jacob LaRocca won the pole vault at 5.10 meters.

“It was pretty awesome, especially with my family here,” Carr said. “The adrenaline from the 4×1, I was excited.”

Sophomore distance runner Caroline Fix finished second in 17:04.39 for the Illini. Sophomore Nicki Cast won the 1500-meter event with a time of 4:37.14 while freshman Lauren Katz cruised to a fifth-place finish with a time of 4:42.43.

Head coach Michael Turk said the team has improved over the course of the year. The Illinois Twilight meet doubled as senior night and the only home meet for the Illini this year. Turk also thought the class of 2019 has helped propel the program to be more successful in the future.