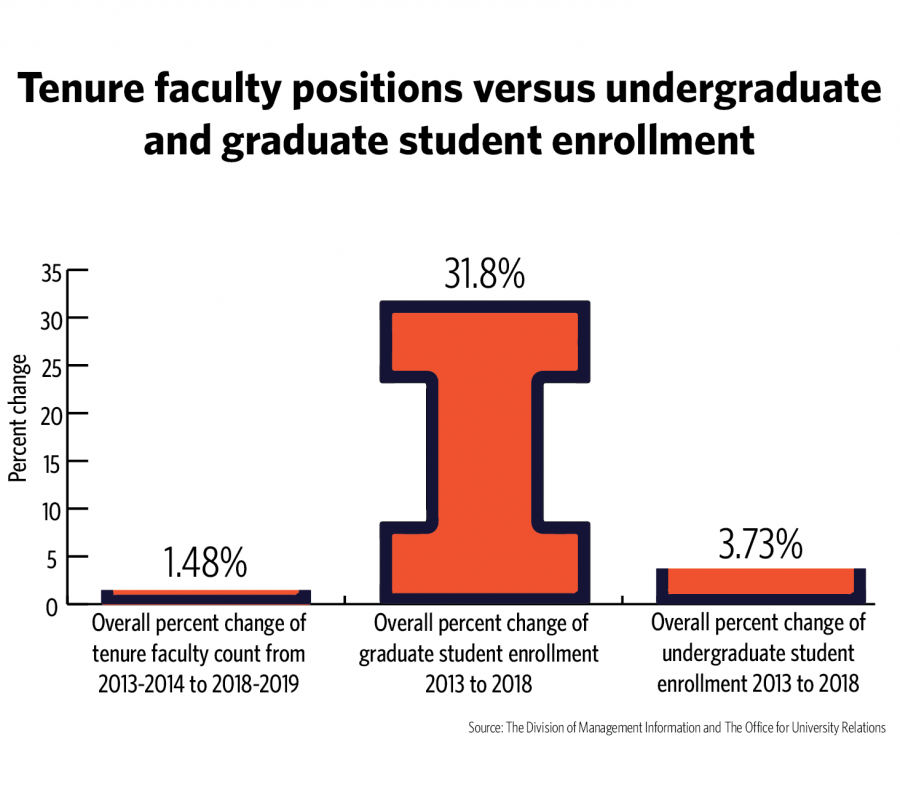 The five-year plan would accommodate 168 more tenure faculty positions at the UI campus with consideration to the amount of positions needed to replace faculty retirements and turnovers. Killeen announced the plan on March 14 during a Board of Trustees meeting.

Since fall 2014, student enrollment across the University System grew about 9.5%, increasing by about 7,500 students. Total tenure faculty growth lagged behind, increasing by 2.1%, or 68 professors, Killeen said during the meeting.

Killeen attributed this delayed faculty growth to a two-year state budget impasse that took away hundreds of millions of dollars from the University’s day-to-day operations.

“In the end, our universities rise on the quality of our students and faculty,” Killeen said. “As we grow one group, we must nurture and grow the other.”

The additional funds to support new salaries and cover start-up costs would be millions of dollars across the three campuses every year. These funding needs would be met by expanding on all revenue sources, including fundraising and state appropriations.

Bill Bernhard, vice provost for Academic Affairs, was unable to comment directly on Killeen’s five-year plan but rather more broadly about the University’s faculty hiring plans.

“We have identified the net growth of our faculty as a critical and pressing need over the next five years,” Bernhard said in an email. “The actual numbers and the timing of hires we might make will be determined by many factors, including regular attrition (retirements, etc.), funding availability and the needs and priorities identified by our academic colleges and departments.”

Killeen said most of the new faculty positions would target graduate and professional programs, which have fueled the bulk of the University’s recent enrollment growth.

Nearly all growth in the Gies College of Business’ graduate program has been in its recently, introduced online masters programs. Students from around the world have enrolled in the programs.

“We had to make big investments in technology, in studios for recording live streaming classes, videographers, instructional designers and other specialized staff,” said Dean of Business Jeffrey Brown. “Even online teaching puts demands on faculty time. Part of the reason we’ve been growing our faculty is to expand our capabilities to deliver on-campus and online programs.”

While the online graduate programs do not require as many faculty resources compared to on-campus programs, the college has still been expanding its faculty in high numbers. Next school year, the College of Business will see an overall increase of about 15 faculty  members.

“All this growth is a really good thing,” Brown said. “The growth in the faculty (and) the growth in revenue-generating graduate programs all comes back to help us do an even better job of also serving our undergraduate population.”

In 2016, the Board of Trustees introduced a system-wide strategic enrollment plan to increase total enrollment across three universities to 93,646 in 2021, a 15% enrollment growth. At UI, this would mean the additional enrollment of over 6,000 students by 2021.

Student applications were at another record high this year, Killeen said.

“Investing in the (University of Illinois) System and in expanding its world class faculty is the key to ensuring that our three universities remain a magnet for the students and an incubator for the talent and discovery that drives progress,” Killeen said.