Notes and grades from Illinois’ 34-31 loss against Eastern Michigan 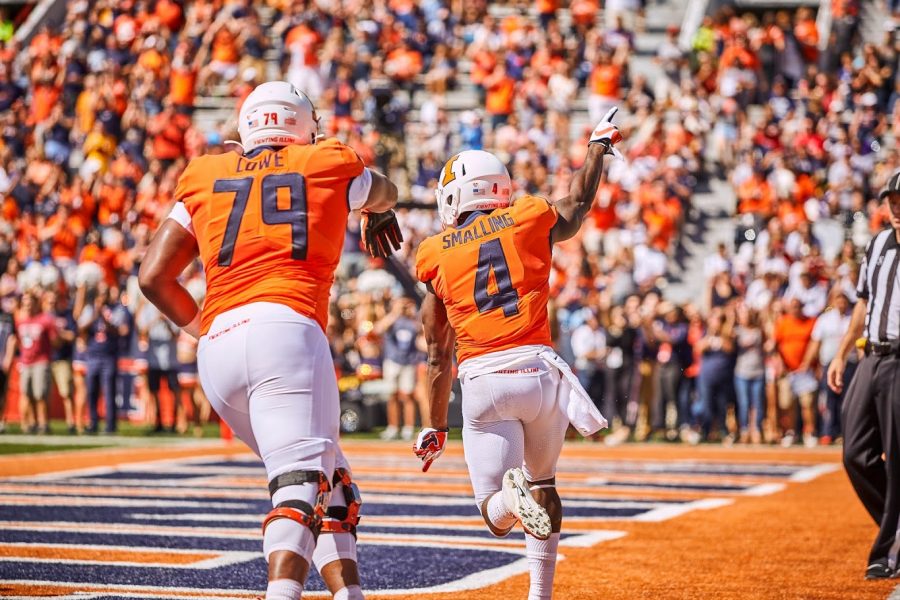 Veteran Lowe (79) and Ricky Smalling (4) run through the end zone on Saturday at Memorial Stadium. The Illini came up short against the Eagles offensively and defensively.

The opportunity for the Illini to achieve its first 3-0 start under head coach Lovie Smith teetered back and forth on Saturday, but Illinois ultimately came up short, falling 34-31 to Eastern Michigan. Offensively, the Illini started out hot but suddenly lost all momentum, largely due to penalties, in the second and third quarters only to heat up again in the fourth. For the defense, it was just the opposite: a sloppy start followed by an improved second half only to end in capitulation in the fourth.

While 30+ points for a third straight game is a positive aspect to relish, the Illini offense simply was not consistent enough.

After starting out strong with 17 points courtesy of a James McCourt field goal, a 14-yard touchdown catch from junior receiver Ricky Smalling and a four-yard touchdown run from junior tailback Ra’Von Bonner, turnovers and penalties slowed the Illinois momentum.

“Offensively, if you look at the final stat-sheet, we did some good things, Reggie Corbin rushed for a lot of yards, Josh (Imatorbhebhe) had a good game, caught a lot of passes, as did Daniel Barker,” Smith said. “(We) gave ourselves opportunities to do some things but were stomped in the fought a little bit. Turnovers, turnovers really hurt us, penalties maybe hurt us even more.“

The Illini went scoreless from the second quarter until the fourth, in large part due to turnovers.

Quarterback Brandon Peters, who finished with 297 yards passing and two touchdowns, fumbled and threw an interception in consecutive third-quarter drives, as Illinois couldn’t help but let Eastern Michigan hang around and even gain a 14-point lead by the fourth quarter.

Furthermore, Illinois committed nine penalties for 80 yards, with the offensive line being responsible for the majority of the infractions.

“You look at this game (and) last game, it was just penalties that killed us,” said junior right tackle Alex Palczewski. “We need to stop shooting ourselves in the foot.”

With the game looking all but over, Peters led an 11-play touchdown drive, culminating in a 28-yard touchdown run from senior Reggie Corbin, who was finally back healthy and ran for 145 yards, to cut the deficit to 31-24.

After forcing a punt, Illinois was backed up to its own 7-yard line and facing a fourth and 10 with the game on the line. Peters proceeded to find junior Josh Imatorbhebhe down the field, and the Southern California transfer ran after the catch for a 32-yard gain. Peters went to Imatorbhebhe again for 14 yards the next play and then hit him for a touchdown from 36 yards away to tie the game.

Despite catching four passes for 91 yards and a score, Imatorbhebhe felt the game could have gone much better.

“I don’t feel like we played our best football at all,” Imatorbhebhe said. “It’s hard to find the good in this if I’m being honest because it just wasn’t good at all. If anything, we didn’t really play that well and we still almost beat a team that was better than we thought they were, so that shows the potential that we have.”

After giving up two early touchdowns, the defense clamped down and allowed just nine points through the second and third quarters. However, the unit crumbled again in the fourth, letting up a touchdown to give Eastern Michigan a two-score lead, and then let the Eagles march down the field and kick a game-winning field goal as time expired after all the offensive heroics to tie the game.

“You saw it,” Smith said. “They were behind us. They made plays, we didn’t. Normally when that’s the case, pass-rush is not good, or a combination of both of those and I’d say that (was) the case.”

The unit could only muster up one sack, and consistently let Eagle quarterback Mike Glass pick their poison with the read-option.

Glass finished the game with 316 yards passing and three touchdowns, displaying a big arm throughout the day.

“Their quarterback played outstanding ball,” Smith said. “Passed for over 300 yards, three touchdowns. We shouldn’t give up big plays like that.”

Indeed big plays plagued the Illini defense, as all of the Eagles’ touchdowns came from 25+ yards away through the air, as the secondary was consistently losing jump-balls and missing tackles.

While there were many things that went wrong on Saturday, junior kicker James McCourt tied the school record for the longest field goal, as he got the Illini on the board with a 57-yard make.

Though he was happy to have placed his name in the school’s record book, McCourt would’ve liked one more kick to win the game, no matter how far away.

“The scenario, with the score, the game-winner was (an) outcome that could have happened, so my mind was pretty focused on a game-winner in the fourth quarter,” McCourt said. “I wasn’t really worried about the distance, I was just worried about making the field goal.”

Returner Jordan Holmes also had a crucial fair catch that saved the Illini a few yards before their final offensive position, as the punt had hung up in the air with three Eagles in position to down it.

The competition only ramps up from here on out, as Illinois opens up conference play under the lights at home against Nebraska next Saturday. Lovie Smith’s team will be looking to erase not only the pain of losing but the let-down from falling short of their goal to finish the non-conference season undefeated.