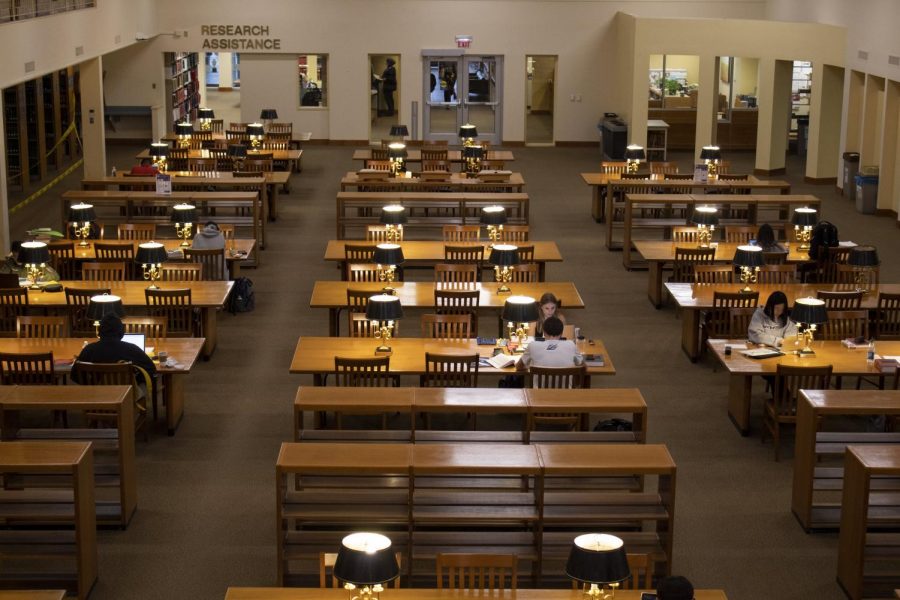 On Saturday, the Law School Admission Test underwent one of its biggest changes in decades: It took a new digital form on a tablet.

After a successful initial launch in July in which half of pre-law students took the paper version and half took the digital version of the LSAT, the Law School Admission Council decided the LSAT will no longer be administered as a paper exam.

“For the past several years, the Law School Admission Council has been evaluating various pathways to digitally transform the LSAT with the goal of evolving the experience to increase accessibility,” said Troy Lowry, senior vice president of Technology Products and chief information officer at the Law School Admissions Council, in an email. “The recent scandal involving college admissions is a good reminder that our continued vigilance in this area is warranted.”

Russel Schaffer, senior communications manager from Kaplan Test Prep, said the University has one of the largest number of pre-law students in the country.

“The days of paper and pencil, the testing format that college students are most familiar with, are over,” Schaffer said.

Kaplan’s senior manager for instructional design, Glen Stohr, authors the Kaplan e-book. Stohr has been an LSAT teacher for over 20 years and has taught thousands of students preparing for the exam and law school.

“This is without a doubt the biggest change to the LSAT in over 25 years,” Stohr said.

“It will be faster and easier for them to process scores because they don’t have to ship score sheets back to a certain location and run them through a machine,” Stohr said.

Stohr said he believes students will value the change.

Before, if a test taker missed one test date, he or she had to wait three months before testing again.

The test is now administered on a Microsoft Surface Pro tablet and is more secure, Stohr said.

“The only thing on the tablet is a proprietary software that LSAC designed just to deliver this test,” Stohr said. “If you were to try to swipe one of those, as soon as you get that tablet out of range of its ‘mothership’ computer, there’s nothing on it. A test booklet is less secure.”

Stohr said the new digital format will also help make the testing environment more consistent. For example, some proctors could have given time warnings during each section while others may have forgotten or given them late.

“Now everybody’s section starts at the same time,” Stohr said. “You get a popup on the screen that you have to dismiss that says there are five minutes left in the section. I think that’s just a comforting thing for the test to be really super consistent with everybody.”

“A classic example is one in which you get a large print text for an eyesight accommodation,” Stohr said.  “Now, you can simply change the font size on the screen. You don’t have to reprint a different booklet and ship it differently.”

The test-makers have also added tools to assist students with techniques they may have used on a paper test, such as a stylus for marking notes and a program that allows the use of the elimination method for test questions.

However, Stohr said it is still beneficial to practice with the new digital interface so that it becomes second nature.

The technological glitches were small and isolated enough to continue with the launch, Stohr added.

“I know there was one place where the tablets hadn’t been properly charged, I think just human error,” Stohr said. “But the technological problems were really small and limited.”

Lowry said another benefit is the digital test eliminates the risk of accidentally filling in the wrong bubble.

“This benefit will help to relieve some of the anxiety in taking the test— — that is, anxiety about errors due to having to put all answers on the answer sheet,” Lowry said.

Lowry said many test takers who had gone in for a paper test and had gotten the digital test instead ended up liking the digital exam better. They found it more efficient to select answers with a single click instead of finding and filling in a bubble on a separate answer sheet. Many found it much easier to flag questions and come back to them with the digital format.

“The Digital LSAT is just the tip of the iceberg in terms of how data and digital approaches can transform our organization and help us accomplish our mission of serving candidates, schools, institutions and society as a whole,” Lowry said.