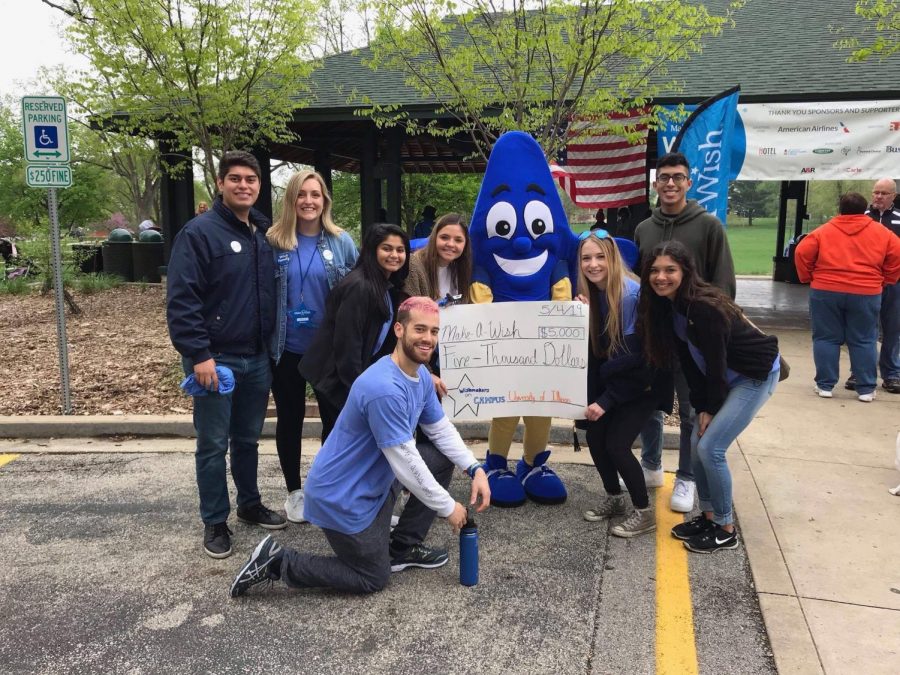 Students in Wishmakers on Campus pose with the Make-A-Wish mascot at a charity event, one of many that the RSO volunteers at each semester. The RSO grants wishes for children with life-threatening illnesses, raising money through several events each year.

Wishmakers on Campus makes wishing on a star a reality for some children with life-threatening illnesses. At the University, this organization helps raise money for the Make-A-Wish foundation.

Lindsey Panozzo, a senior in AHS, serves as one of the vice-presidents of the RSO.

“Having organizations like Wishmakers present on campus allows students to use their free time for good by finding ways to support organizations that have the ability to change so many lives,” Panozzo said.

She said she was proud to be a part of the group.

“With so many student organizations to choose from, Wishmakers is a fantastic organization to be apart of because we help positively impact lives of children in need, while finding fun and engaging ways to do it on our college campus.”

Wishmakers helps its members, providing them a community to be a part of, those they are fundraising for and those who get the chance to contribute to their cause.

Panozzo herself was helped by the Make-A-Wish foundation and is a Wish Ambassador.

“When I was 14 years old, I was diagnosed with a rare form of ovarian cancer. My battle with cancer led me to the Make-A-Wish Foundation, and they granted my wish of going to Hawaii with my family,” she said.

What comes around goes back around in this case. Panozzo said Make-A-Wish impacted her life, so she does whatever she can to give back to them. She said she wants to help carry out their mission.

“When I found out about Wishmakers at UIUC, I had to join it because this was a way for me to get involved on campus, but also find other students who wanted to help in the same ways,” Panozzo said.

Riya Shah, a junior in Business, is the co-fundraising chair for Wishmakers on Campus.

“My key takeaway from being a part of Wishmakers is that you can’t take anything for granted and (should) make the most out of every day,” Shah said.

Shah spoke in great detail about the extent to which Wishmakers has outreach opportunities all across campus. She said they work directly with the Chicago Make-A-Wish office. Shah also points to the variety of events and fundraisers they host as the reason they have a solid presence on campus.

They do profit-share events, at Joe’s Brewery Fundraiser, sand volleyball tournament and trivia night at Murphy’s.

“This is an important organization because its students are able to see what Make-A-Wish does and learn more about kids going through terminal illness,” Shah said. “Also, there are students that go to UIUC that have been wish kids themselves and this is a way for them to give back.”

Fighting cancer is an experience that is foreign to most of the student body, so some find it difficult to fathom fighting against it. For others, that is their reality.

Montserrat Villalpando, a junior studying psychology, is an active member of the organization.

“I think most people see cancer as being a very negative experience. In all of our general meetings, we watch a video on a child who has been granted a wish and get to know some of their story,” Villalpando said. “I find that children tend to be more resilient and hopeful, which might ease the difficulty of the situation for their family and loved ones.”

It is possible for any student at the University to join this inspiring organization. They do not need any specific connection to the organization; they just need to care about helping those who are fighting for their health.

Panozzo spoke about the misconceptions that people have about who is granted a wish. She said that it is untrue that only terminally ill individuals are granted a wish. Numerous children, some who are not even impacted by cancer get their wishes granted all the time. This allows Wishmakers on Campus to help a number of children with the work they do.

“Wishes are not a last wish, but an everlasting wish,” Panozzo said.